31 October 2014: OK, I admit it: I am flying tomorrow and sometimes things like the "Bermuda Triangle," Malaysia Air, and yes, Amelia Earhart pop unbidden into my head. Perhaps it's that there have been a couple of news pieces lately focusing on Amelia Earhart (and not that I am flying!) that causes me to offer some insight - well, maybe not insight, but surely some information - on the aviatrix who vanished in 1937! 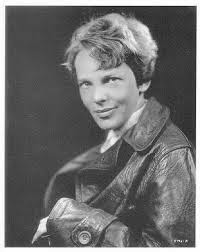 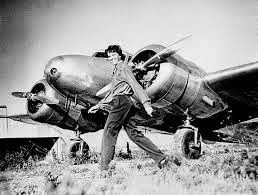 Ms. Earhart was a driven lady; she was consumed with flight and planes in those early days of air pioneers - and she was determined to "top" "Lucky Lindy's" transatlantic feat with a round the world flight in her 2 motor Lockheed Electra plane.

She disappeared in the Pacific Ocean on 2 July, 1937 and, almost since then, people form various organizations have been looking for her, the plane wreckage, or some sign of her presence. Well, recently, a piece of aluminum found in 1991 on Nikumaroro Island (between Hawaii and Australia) has been confirmed with a "high degree of certainty" to be from her aircraft.

This bit of metal was applied to her plane in Miami, early in her trip, to replace a window in the rear section of the aircraft. She had stopped in Miami for 8 days - it was the fourth stop in her trip - and while there, had the piece of aluminum installed to replace the navigator's window. A photo of the plane taking off on 1 June, 1937 for the next leg of her trip clearly shows the patch and after studying the rivet holes and other material, The International Group for Historic Aircraft Recover (TIGHAR) has offered their confirmation of its authenticity.

In conjunction with sidescan sonar searches and a couple of other artifacts found in water and the jungle of the uninhabited island, it is possible that by this time next year, the mystery  - at least the part about where she crashed - could be solved.  So what? 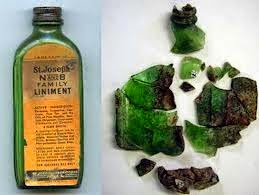 The bottle on the left was a popular ointment of the time which Amelia was known to have had in her possession and on the plane. The shards are what were found on the island. To the right, we have a sidescan sonar image purporting to show at least some portion of the wreck of the Lockheed Electra. (I know, doesn't look like much to us, but to the experts, it apparently does!) Further, analytical study of a photograph of the lagoon at Nikumaroro taken some 3 months after her disappearance has shown that an anomaly sticking out of the water might be a landing gear from an aircraft.

OK - now for the 'so what' portion of our program. Should the artifacts and plane wreckage prove to be Amelia Earhart's, then the popular notion that she and her navigator, Fred Noonan, crashed in the ocean after running out of gas near their destination of Howland Island, some 350 miles to the northwest, falls apart. What the discovery will show is that they made a forced landing on the smooth, flat reef of Nikumaroro Island and became castaways in the jungle. In fact, ten earlier archeological expeditions have uncovered some pretty strong circumstantial evidence attesting to that hypothesis. There is also some proof that Earhart sent radio distress calls for at least five nights before the plane was washed off the reef by rising tides and waves, settling on the bottom some 600 feet below the surface.

In June of next year, TIGHAR will return to Nikumaroro Island with sufficient underwater apparati, including a deep submersible ROV (remotely operated vehicle) to investigate what might be in the sonar image.

For further information on Earhart and the search for her plane, check out www.ameliaearhart.com.

"Not all who wander are lost." JRR Tolkien

Fair Winds,
Old Salt
Posted by Maritime Maunder at 11:57 AM