12 OCTOBER 2014:  Besides being Columbus Day, it is the anniversary of the terrorist attack on the USS Cole (DDG 67) in the port of Aden, Yemen. The ship is (I didn't say "was" because she is still on active duty, having been repaired - more on that shortly) an Arleigh Burke class destroyer - the 17th in her class. Here's what she looks like: 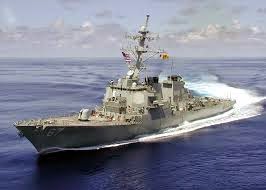 One of the better designed and functional destroyers of the "modern" navy!

It was a the morning of 12 October and Cole had moored out in the harbor at Aden to take on fuel. A small craft - it was a hard-bottom inflatable - manned by two men and carrying over 500 pounds of explosives - approached the port side of the ship. Alongside, the shaped charge in the boat detonated and blew a hole 40' X 60' in the side of the destroyer. The explosion blew through the galley where the crew had just lined up for the midday meal and also opened the engineering spaces to the sea. 17 sailors were killed outright and 39 were wounded in the blast. The crew fought the fires and flooding for three days before it was brought under control. After an inspection by divers, it was found that the keel was not damaged.

The injured men were removed to the Army's Landstuhl Regional Medical Center at Ramstein Germany and from there to the United States.

This was the deadliest attack on a US warship since the Iraqi attack on the USS Stark in May 1987.

Al-Qaeda took credit for the attack (they had failed in an attempt on the USS The Sullivans in Aden in January of the same year due to an overloaded attack boat which sank during the run-in) and the so-called master-mind, Khalid al_Mihdhar was not caught (in spite of presidential promises to the contrary!)  and would return to the United States to help fly American Airlines Flight 77 which crashed into the Pentagon on 9/11/2001.

The British Type 23 frigate, HMS Marlborough first on the scene to help the stricken Cole and provided both medical and damage control assistance.

A monument/memorial was erected in Norfolk to commemorate those who lost their lives in the tragedy. 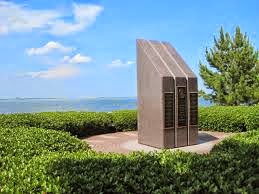 "Distilled of all impurities, these days (Autumn) are the true sparklers of the year." Mary Jane Hayes
Eye of the Sea

Posted by Maritime Maunder at 12:53 PM