29 June 2021: OK, so we're a few days late this week; sorry about that. Got tied up with other stuff and didn't get to this great tale of the very first commercially viable (almost) submarine. So, without further ado, let's have a look at the submarine that almost worked during the American Revolution, courtesy of Military History.

While the submarines of today are obviously very technologically advanced, there was a time when they were quite primitive. To put this into perspective, the first time that a submarine was actually commissioned for military purposes was in 1775.

The vessel in question was called the Turtle and was used by the American Continental Army during the Revolutionary War to fight the British. As you might expect, this submarine was pretty different from the ones that we're accustomed to today.

Towards the beginning of the American Revolution, an inventor by the name of David Bushnell recognized that the various American militias were having extreme difficulties fending off British ships. The reason for these issues was that the British Navy was at its peak when the conflict broke out; thus, making it quite difficult to win any naval battles.

As a result of this, Bushnell decided that the best way to remove Great Britain's ships would be to do so via stealthy operations. In order to accomplish this momentous task, Bushnell put together his expertise of underwater explosions and his limited knowledge of submarines.

The end result was an acorn-shaped submersible that (in practice) would be able to attach explosives to the hulls of England's finest vessels. To construct the experimental craft, Bushnell utilized two wooden shells that were painted with tar and braced them with steel brackets. To operate the underwater warship, propellers and a hand pump were fitted that allowed the sub to raise and lower while underwater. 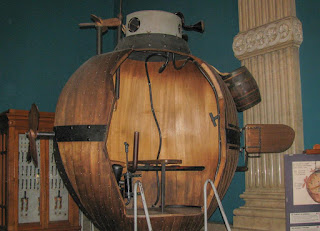 In August of 1776, after months of training and testing, Bushnell and an American general named Samuel Holden Parsons decided that it was time to put the Turtle into action. The target in question would be the HMS Eagle, which was considered by many to be the flagship vessel of the British fleet in New York's harbor. The individual who would pilot the submarine for its maiden voyage would be a soldier named Sgt. Ezra Lee.

Lee's mission would be to approach the Eagle from under the water and surface at the very back of the ship. Once there, Lee would then screw the explosive into the hull of the ship and flee to safety. If all went according to plan, the explosives would sink the ship, as well as heavily damage British morale.

On the night of September 6th, 1776, Sgt. Lee set off towards the Eagle from the New York coast. It took him over 2 hours to reach his destination, which unfortunately left him with only 20 minutes of oxygen to work with. As a result of the time crunch, Lee frantically attempted to screw the explosive into the hull to no avail. 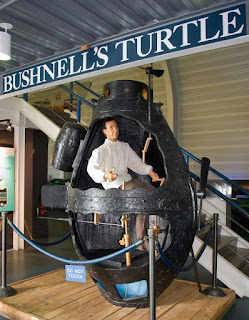 As he made another attempt on the side of the hull, Lee was spotted by soldiers who were stationed onshore. As the English troops rowed out to investigate, Lee lit the fuse to the explosive, threw it in the harbor, and escaped underwater. Though the explosive did detonate, nobody was injured, nor was any ship damaged.

One month later, Lee made yet another attempt on a different ship off of the coast of Manhattan. This time around, however, he was spotted almost immediately; thus, forcing him to abandon the mission. A few days later, the British discovered the Turtle while it was engaged in yet another mission and destroyed it.

Despite the apparent failure of the Turtle, this did not stop the likes of George Washington from praising Bushnell's design. Washington even referred to the Turtle as a stroke of genius; albeit, one with too many factors working against it.

While Bushnell would never successfully sink a ship with a submarine throughout the American Revolution, he would go on to inspire future inventors like that of Robert Fulton and John Holland (creator of the Hunley [Civil War]). Historians would also bestow him with the title of "Founder of Modern Submersible Warfare.

Who would have thought that this humble beginning would evolve into the sleek, deadly, and fast submarines that we take for granted today!

Posted by Maritime Maunder at 12:55 PM No comments:

19 June 2021: Back in the 18th century (until 1783, when the American Revolution Truce was signed), Great Britain used the North American continent, and the American colonies, as a dumping ground for miscreants who didn't commit crimes serious enough to merit major punishment, but who would better serve the country by being gone from it. It was called "being transported" and, along with indentured servants, was a major population factor in the colonies. When the War was ended and England no longer had the option of North America for her felons, the government determined that their possession in the far reaches of the Pacific would be a fine substitute; it was far away, lightly inhabited, and had plenty of land to house the convicts. In fact, William Bainbridge (yes, the guy from the Bounty mutiny) was once governor there. Convicts sentenced to "transportation" were loaded on ships and sent off to Australia and/or New Zealand to spend the rest of their lives. Actually, for most, it was not a terrible sentence.

One of the last ships used for transporting prisoners was the Edwin Fox, and this story, courtesy of our reader Hankus, came mostly from CNN.

Wellington, New Zealand (CNN) — The storm that struck the Edwin Fox on February 1873 might sound dramatic.

It's one of many stories involving the vessel, which nearly 150 years later is the last surviving ship that transported prisoners from England to Australia -- not to mention took passengers to New Zealand, ferried soldiers to fight in the Crimean War, moved cargo across oceans, and even played a role in New Zealand becoming stereotyped as synonymous with sheep.

Amid such a storied history, how the Edwin Fox ended up in a seaside town at the top of New Zealand's South Island is equally dramatic.

In the mid-19th century, the sun seemingly never set on the British Empire. Stretching worldwide, the towering masts and billowing sails of its fleet of merchant ships were as common a sight at ports as jet planes at airports today.

Amid that backdrop, the Edwin Fox's origins are unremarkable. Karen McLeod, manager of the Edwin Fox Museum, says it was built in Kolkata -- or Calcutta, as the Indian port was known then -- out of teak, a wood prized for shipbuilding.

According to Adrian Shubert and Boyd Cothran, professor and associate professor, respectively, of history at York University in Toronto and authors of the upcoming book "Edwin Fox: The Extraordinary Story of How an Ordinary Sailing Ship Connected the World in the Age of Globalization," ships like the Fox went where work was.

Though the Edwin Fox took part in events like the 1850s Crimean War (it transported soldiers; legendary nurse Florence Nightingale mentioned the vessel in a letter, but it's unknown if she sailed on it), the ship might be best known for transporting prisoners to Australia. In fact, it's the last surviving ship that took convicts to Australia.

In 1858, the ship was contracted to take prisoners from England to Australia. Among the convicts were William Tester and James Burgess, two of the four men convicted of the "Great Gold Robbery" in which about 12,000 pounds sterling worth of gold (about $1.88 million today) were stolen from a train in 1855 (later adapted into a Michael Crichton novel and movie starring Sean Connery and Donald Sutherland).

On board, prisoners were often shackled, in case they tried to take over the ship or escape. Despite the perceived danger, many guards brought their families along -- three babies were even born on the voyage.

Dangerous as the Fox's voyages were, there were no pirate attacks. McLeod notes the Edwin Fox wasn't built for combat -- it didn't even carry cannons, though it had holes painted on its sides to make would-be pirates think it did. 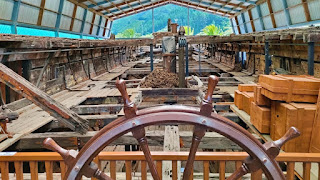 More than a decade later, the Edwin Fox again took people to the other side of the world. This time, they weren't prisoners.

"The Fox delivered nearly 800 people to New Zealand," explains McLeod of the voyages the ship took in the 1870s, which started in England and typically took three months, one-way. A number of New Zealanders can today trace their ancestry to immigrants who arrived on the Edwin Fox.

McLeod says a ticket usually cost 16 pounds sterling -- about $2,700 today. But the conditions made even the most bare-bones economy class flights seem luxurious.

Cabins were cramped. The ship rocked about on the waves, especially in storms, one of which in 1873 resulted in multiple fatalities. Toilets were scarce. The food was usually terrible. The close, smelly, damp conditions meant disease was rampant. McLeod says one man even died after he broke his leg and couldn't get adequate treatment.

"These were not worldly people (who traveled on the Fox), but I would say very brave," she says.

"Some were conned into believing they had purchased land, and many were told things like New Zealand was a Pacific island with banana plantations where it seldom ever rained."

The invention of steam ships cut travel times between England and New Zealand to about six weeks. The Edwin Fox was repurposed as a freezing works for lamb.

A new freezing works was built, and the ship was repurposed again. It was converted for storing coal -- until that too, was disrupted by technological advancements.

Eventually, the ship was saved by the Edwin Fox Society, transferred to the Marlborough Heritage Trust, and today is at an eponymous museum in Picton.

McLeod says the museum has traditionally been more popular with overseas visitors. But with borders still mostly closed, more New Zealanders have been discovering the Fox. 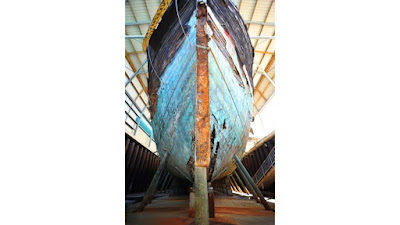 It's not just a relic of the past. Shubert and Cochran sum up the Edwin Fox's continued relevance as "understanding what globalization meant in the 19th and early 20th centuries, that there were many losers as well as winners, and that it included many unexpected connections and consequences, is important to keep in mind as we try to understand the globalization we ourselves are living.

A good story of remembering and maintaining the past without trying to "sugar-coat" it or change it because it might be unpleasant! Thank you, New Zealand.

See you next week, friends.

Posted by Maritime Maunder at 10:03 AM No comments: