27 January 2020: Apologize for the delay in posting this week - we were away on our boat for a few days with no computer access. These two articles appeared last week on the same day in the US and seem to be at cross purposes. Or two sides of the same coin. Guess it depends on which side your bread is buttered!
~~~~~~~~~~~~~~~~


"The Titanic Wreck Will Now Be Protected Under a 'Momentous Agreement' With the U.S."

The world’s most famous shipwreck, the RMS Titanic, will be more rigorously protected under an international agreement, the U.K.’s Maritime Minister Nusrat Ghani confirmed ahead of a Tuesday visit to Belfast, where the ship was built. 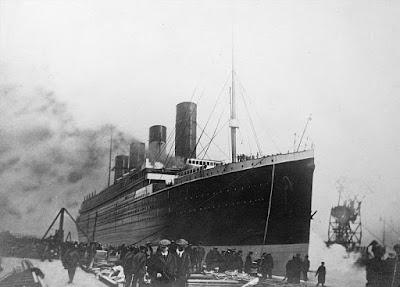 The U.K. and the U.S. will now be responsible for granting permits to those wishing to visit the wreck and remove artifacts. The agreement, which was signed by the United Kingdom in 2003, was ratified by U.S. Secretary of State Mike Pompeo last year. The agreement will further protect the wreck, which became a UNESCO cultural heritage site in 2012. The U.K. will take a leading role in protecting the wreck, encouraging other North Atlantic countries like France and Canada to sign the agreement.
“Lying two and a half miles below the ocean surface, the RMS Titanic is the subject of the most documented maritime tragedy in history,” Ghani said in a press release. “This momentous agreement with the United States to preserve the wreck means it will be treated with the sensitivity and respect owed to the final resting place of more than 1,500 lives.”

The ship’s disappearance became a source of fascination for oceanographer and former Navy captain Robert Ballard, who embarked on his first unsuccessful search for the wreck in 1977. Determined, Ballard struck a deal with the United States Navy that provided funding for his expedition in exchange for Ballard locating two lost Cold War Navy submarines. In collaboration with a French expedition, Ballard found debris that led him to the ship’s resting place, 350 nautical miles off the Canadian coast of Newfoundland on September 1, 1985.
In 1994, the company RMS Titanic Inc., a subsidiary of Premier Exhibitions, became the wreck’s salvor-in-possession—the only company allowed to collect artifacts. The company has now collected more than 5,500 artifacts, including a 17-ton section of the hull that was raised out of the ocean in 1998. Some artifacts were previously auctioned off by Henry Aldridge & Son, such as a water-stained letter written by a passenger on board the ship that sold for £126,000 ($163,800) as well as a violin that sold for £1.1 million ($1.43 million). Photographs taken of the wreck during expeditions allowed the company RMS Titanic Inc. to recreate digital images of the grand staircase that featured in James Cameron’s 1997 film Titanic.

For years, diving companies such as Ocean Gate have commercialized diving expeditions to the wreck by making them available to tourists prepared to spend tens of thousands of dollars. The first tourists dived to the wreck in 1998 and officials believe the last confirmed trip was in 2012.

And from another source on the SAME DAY:


Company launches daring effort to retrieve Titanic relics — but US, U.K. not on board

A Georgia-based company is on a mission to save precious artifacts from the wreck of the Titanic — but the US and British governments aren’t on board with the plan, according to a report.
RMS Titanic Inc. has unveiled a daring scheme to extract relics from inside the shipwreck by using underwater robots to remove a section of the deckhouse roof, The Telegraph reported.
“The ship is deteriorating and if we don’t take action now, we’ll be too late,” said Bretton Hunchak, president of RMS Titanic.
The firm on Monday filed a notice of intent in Virginia federal court to retrieve hundreds of Titanic items. 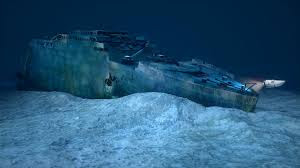 Activists and descendants of the more than 1,500 people who died when the passenger liner sank in the North Atlantic on its maiden voyage from England to New York in April 1912 argue that the underwater mass grave should be left alone — and the British and US governments seem to agree.
British Maritime Minister Nusrat Ghani on Tuesday announced a “historic treaty” with the US that makes both countries responsible for granting permits to those wishing to visit the wreck and remove artifacts.

“This momentous agreement with the United States to preserve the wreck means it will be treated with the sensitivity and respect owed to the final resting place of more than 1,500 lives,” Ghani said.
RMS Titanic, a subsidiary of Premier Exhibitions, became the ship’s official “salvor-in-possession” in 1993, making it the only entity allowed to collect artifacts from the wreck.
Until now, the 5,500 objects salvaged by the company came from a debris field surrounding the wreck about 370 miles off the coast of Newfoundland. It also removed a 17-ton section of the hull.
Hunchak said it’s important to save precious items for future generations before they are lost forever.
“Of course, we recognize and respect the tragedy of what happened,” he told The Telegraph. “But the hard truth is that we need to share what we can see with the rest of the world.”
Among the artifacts the company wants to retrieve is the wireless radio system by Nobel Prize-winning physicist Guglielmo Marconi that the crew of the Titanic used to call for help.
“The Marconi wireless can teach us so much about the last moments of the Titanic and the heroes who died that night,” Hunchak said.
If the mission is successful, the Marconi would be conserved and put on display at the Luxor casino in Las Vegas before being put on a worldwide publicity tour.
Under the terms of the company’s official steward status, it must get permission from a judge before every expedition.
It’s unclear if or how the US-British pact will affect Monday’s court request.
Sources at RMS Titanic told The Telegraph that the firm intends to “entirely ignore” the British-led agreement because it only needs to answer to US courts. [emphasis from ed.]
~~~~~~~~~~~~~~~~~~~~~~~~

It will be interesting to see how this plays out. We here at Maritime Maunder would side with the protectionist folks; while the wreck is deteriorating unquestionably, it is hallowed ground i.e. the burial place of some 1500 humans. We say leave it alone. Leave us a comment if you wish on this one!