13 October 2014: In our last post, we told you about the terrorist attack on USS Cole (DDG 67) and what followed in the immediate aftermath. Now we will focus on the recovery and rehabilitation of the ship, and her restoration to active duty. Not a small feat!

After the attack and once the crew got the flooding stabilized, and the wounded and dead off the ship, she was towed out to deeper water off Aden, where the heavy-lift vessel, MS Blue Marlin, awaited her arrival. Blue Marlin is owned by Offshore Heavy Transport of Oslo, Norway and would carry Cole to Mississippi. 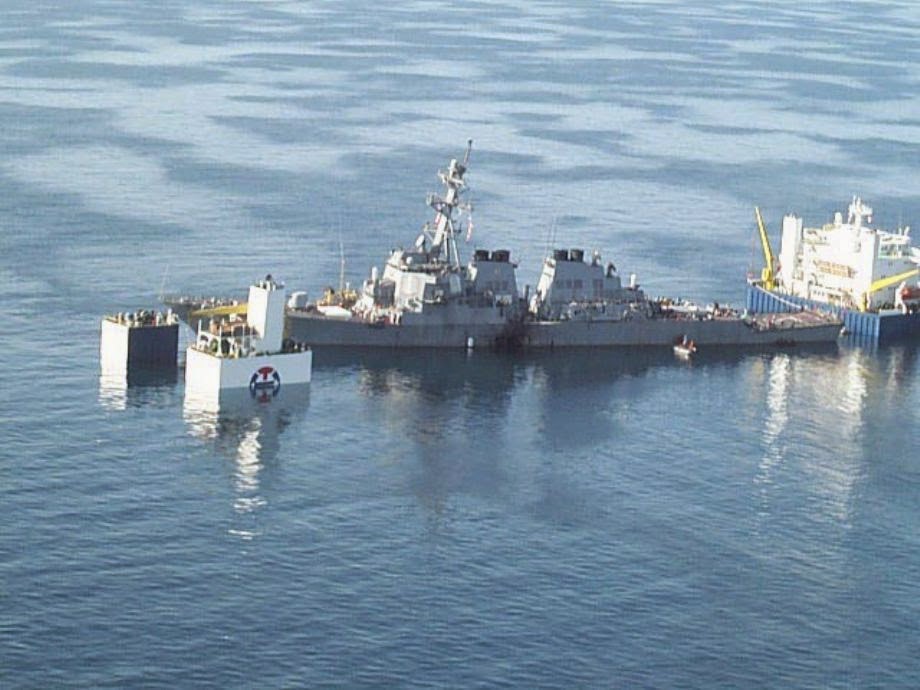 To load the destroyer, the heavy lift vessel is sunk down to allow the cargo, in this case, Cole, to float on, and then pumped out to raise her up. 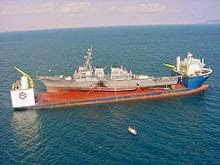 Blue Marlin then steamed with her cargo to Pascagoula, Mississippi and the shipyard of Northrop-Gruman Ship Systems there. On 13 December, Cole was off-loaded by reversing the process used to put her on the heavy lift vessel in a specially dug channel and put in a floating dry dock there. A month later, after being stabilized, the ship was transported overland to the land facility at Litton Ingalls Shipbuilding to begin the restoration. She was now placed in a work bay close by to where she had been built just five years previously.

On 14 September, 2001, Cole was re-launched, secretly at night to avoid a large media event which had been scheduled prior to the September 11 attack, the Navy deeming it ill-advised to draw attention to the launch. Perhaps, on further thought, a big media event might have been just what the country needed in those dark days following 9/11. Show the world we can take a punch, but keep fighting.

In any case, Cole completed her restoration and on 19 April 2002, returned to her homeport of Norfolk, Virginia. 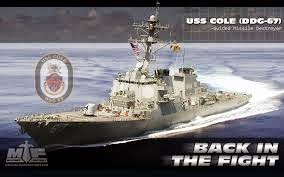 "Here today, up and off to somewhere else tomorrow! Travel, change, interest, excitement! The whole world before you and a horizon that always changing!" Kenneth Grahame, The Wind in the Willows

Fair Winds,
Old Salt
Posted by Maritime Maunder at 7:13 AM