NASCENT U.S. NAVY LOSES A BATTLE BUT GAINS A MOTTO

1 June 2018: 205 years ago, in 1813, a young, eager, and supremely self-confident James Lawrence, fresh from a brilliant (in his mind) victory over a more lightly armed British ship, HMS Peacock, off Brazil, takes his new command, Chesapeake, out of Boston with the intent of engaging the British frigate which had been cruising off and on the entrance to President Roads in Boston. His ship is short handed and many of the men aboard are disgruntled at not having been paid while many others are raw recruits. They have never trained together as a crew nor have they any experience with their new captain, James Lawrence. A few of his sailors and officers had transferred with him from his previous command, but they were not integrated with his new crew, nor were they trusted. And several of the older hands had deserted. A recipe for disaster you might think. And you would be right.

The British frigate which had been watching Boston Harbor, HMS Shannon, was under the command of Captain Philip Bowes Vere Broke, and was probably the crack British warship on the North American Station. Her crew had sailed and fought together for several years and her captain was highly experienced, a fine sailor, and brilliant tactician. Chesapeake mounted 50 guns, including 28 long 18 pounders on the gun deck, and on the spar deck two long 12 pounders, one long 18 pounder, and eighteen 32 - pound carronades, and one 12 pound carronade. Shannon was about equal in weight of metal.

On June 1st, 1813, at about noon, Chesapeake left Boston Harbor,   heading right for Shannon. It was said that Captain Broke had sent a note into Boston, challenging Lawrence to come out and fight, but the fact is, the note did not reach the harbor until Chesapeake had already left. The townspeople sat on hilltops and roofs, many with picnic baskets, to watch what would be the first frigate engagement within sight of land. It was sure to be a continuation of the brilliant American performances since the start of the war, they told each other.

The British captain feared his enemy would pass under Shannon's stern and rake her deck with a devastating cannonade and maneuvered to prevent it, but for some reason Captain Lawrence overlooked his advantage. At 5:50 Captain Broke ordered his ship to open fire, and Chesapeake replied with her own broadside. Although the American broadsides were inflicting some damage on the British frigate, many of their shots flew high, over the deck, causing little damage. Chesapeake however suffered greatly from the British frigate's guns. Minutes later with her jib sheets and fore topsail furling lines shot away, the Chesapeake, unable to maneuver, was exposed to Shannon's continual broadsides. They inflicted heavy casualties on the American crew, but the Americans continued to exchange cannon fire with the British frigate.

At 6:00 p.m. the two frigates came together when the American's bowsprit fouled the backstay on Shannon's mizzen mast; the British captain ordered the two ships lashed together. On board Chesapeake there was mass confusion. Captain Lawrence while standing on deck giving orders to his crew was shot down; as he was carried below he exhorted his crew "Don't give up the ship, lads. Fight her as long as she swims!" 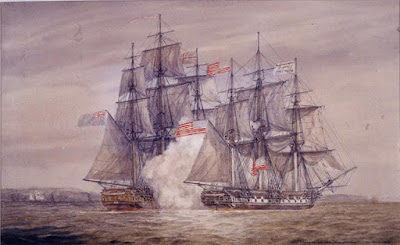 At 6:02 Captain Broke and 20 men boarded Cheaspeake, driving the American gun crews below deck. The only man that seemed to make a stand was the chaplain, Mr. Livermore, who came toward the British captain firing his pistol. Captain Broke stopped him with a swipe of his Toledo blade which nearly severed the chaplain's arm, he died later of his wounds.

The marines continued to defend Chesapeake bravely, but of the 44 of them, 14 were dead and 20 were wounded.


Lieutenant George Budd, a junior officer, tried, after the ships First Lieutenant, Augustus Ludlow, was struck down, to get the crew below to follow him up on deck to defend the ship, but only a few followed him. They repulsed the British briefly, and then surrendered.
Captain Broke wrote of the fight, "The enemy fought desperately, but in disorder."

At 6:05 p.m. Chesapeake's colors were hauled down (by a British sailor) thus ending the battle, only 15 minutes after the first shot was fired.


The Americans suffered 61 killed and 85 wounded. Captain Broke lost 33 killed and 50 wounded. The British sailed the American frigate to Halifax, Nova Scotia.
Both James Lawrence and his First Lieutenant, Augustus Ludlow died en route and were  buried with military honors. Both were later exhumed and reburied in Trinity Churchyard, New York (at the foot of Broadway). 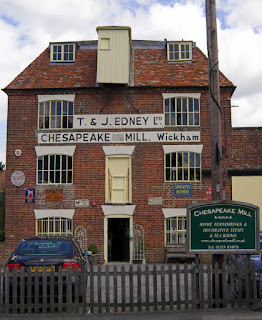 Chesapeake was entered into the Royal Navy for a few years, later sold into private use and then broken up for scrap. Her timbers were used to construct the Chesapeake Mill in Wickham, Hampshire, England. The water mill was designed and constructed in 1820 using the timbers of the former HMS Chesapeake. John Prior paid the sum of £500 for the timbers sold at Portsmouth. The interior of the mill was designed around the dimensions of the deck beams. The mill remained in operation until 1976 and now serves as a retail centre for antique and gift sellers. It is a Grade II* listed building.

The ships timbers - or some of them anyway - live on in the Chesapeake Mill, but the words of her captain, James Lawrence, became the rallying cry and ultimately the motto of the United States Navy: "Don't give up the ship."

Posted by Maritime Maunder at 1:50 PM No comments:

25 MAY 2018: In our last post, we mentioned a recent trip to England. One of the venues I was particularly interested in was the historic Dartmoor Prison, built to house prisoners taken during the Napoleonic War (England vs France) and the War of 1812 (the American War as it's known in Britain). Many people who are aware of the prison's existence are not aware that it is still in use today as a lower security prison for generally non-violent felons. The images, except as marked, were all taken by your humble scribe while visiting. Of course, getting inside the prison itself was not allowed, but the outside and the French and American cemeteries are most impressive. And the day I was there, it was gray and threatening rain, making the whole site even more depressing. The following (in the interest of time) came from Wikipedia (edited).

Designed by Daniel Asher Alexander and constructed originally between 1806 and 1809 by local labour, to hold prisoners of the Napoleonic Wars, it was also used to hold American prisoners from the War of 1812. Although the war ended with the Treaty of Ghent in December 1814, many American prisoners of war still remained in Dartmoor.
From the spring of 1813 until March 1815 about 6,500 American sailors were imprisoned at Dartmoor. These were naval prisoners, and impressed American seamen discharged from British vessels. Whilst the British were in charge of the prison, the prisoners created their own governance and culture. They had courts which meted out punishments, there was an in-prison market, a theatre and a gambling room. About 1,000 of the prisoners were black Americans.[3][4]
After the prisoners heard of the Peace of Ghent, they expected immediate release, but the British government refused to let them go on parole or take any steps until the treaty was ratified by the United States Senate, 17 February 1815. It took several weeks for the American agent to secure ships for their transportation home, and the men grew very impatient. On 4 April, a food contractor attempted to work off some damaged hardtack on them in place of soft bread and was forced to yield by their insurrection. The commandant, Captain T. G. Shortland, suspected them of a design to break out of the gaol. This was the reverse of the truth in general, as they would lose their chance of going on the ships, but a few had made threats of the sort, and the commandant was very uneasy.[4]
About 6:00 pm of the 6th, Shortland discovered a hole from one of the five prisons to the barrack yard near the gun racks. Some prisoners were outside the fence, noisily pelting each other with turf, and many more were near the breach (and the gambling tables), though the signal for return to prisons had sounded. Shortland was convinced of a plot, and rang the alarm bell to collect the officers and have the men ready. This precaution brought back a crowd just going to quarters. Just then a prisoner broke a gate chain with an iron bar and a number of the prisoners pressed through to the prison market square. After attempts at persuasion, Shortland ordered a charge which drove some of the prisoners in. Those near the gate, however, hooted at and taunted the soldiery, who fired a volley over their heads. The crowd yelled louder and threw stones, and the soldiers, probably without orders, fired a direct volley which killed and wounded a large number.


Then they continued firing at the prisoners, many of whom were now struggling to get back inside the blocks.[4]
Finally the captain, a lieutenant and the hospital surgeon (the other officers being at dinner) succeeded in stopping the shooting and caring for the wounded – about 60, 30 seriously, besides seven killed outright. The affair was examined by a joint commission, Charles King for the United States and F. S. Larpent for Great Britain, which exonerated Shortland, justified the initial shooting and blamed the subsequent deaths on unknown culprits. The British government provided for the families of the killed, pensioned the disabled and promoted Shortland.[4]

A memorial has been erected to the 271 POWs (mostly seamen) who are buried in the prison grounds.

The American Cemetery is tended, funded, and maintained by Daughters of the War of 1812.

Dartmoor was reopened in 1851 as a civilian prison, but was closed again in 1917, when it was converted into a Home Office Work Centre for certain conscientious objectors granted release from prison; cells were unlocked, inmates wore their own clothes, and could visit the village in their off-duty time. It was reopened as a prison in 1920, and then contained some of Britain's most serious offenders.
~~~~~~~~~~~~~~~~~~~~~~~~~~~~~~~

Now, as we mentioned above, the prisoners are men convicted of less serious crimes of a generally non-violent nature. They are allowed some freedoms and many are quite talented artists, woodcarvers, and sculptors. The products they make are frequently sold in the museum store and the prisoners derive some financial benefit from the sales.

The Museum is quite well done and offers a pretty complete view of the history of Dartmoor Prison.

On a final note, this weekend marks, in America, Memorial Day, a day we remember those who paid the ultimate price for our freedom. A solemn and fitting tribute from a grateful populace.