22 February 2020: We have posted a variety of pieces on the loss and discovery of HMS Erebus and HMS Terror, the two British ships that made up the Franklin expedition in 1844 to discover a Northwest Passage. Discovered in the last 5 years by Parks Canada archeologists, the wrecks are well preserved by the frigid waters in Northern Canada and exploration has continued as possible and when the weather cooperates. This update comes from AP and Fox.
~~~~~~~~~~~~~~~~~~~~~


Stunning artifacts have been recovered from the wreck of HMS Erebus, one of two 19th-century Royal Navy ships involved in a doomed expedition to locate the Northwest Passage.
Officials in Canada unveiled the items, which include epaulets from a lieutenant’s uniform, ceramic dishes, a hairbrush, and a pencil case, this week. Sealing wax, bearing a fingerprint, that is believed to belong to Edmund Hoar, the captain’s steward, was also found. 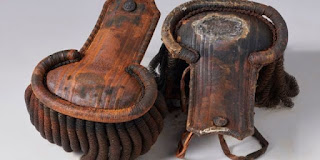 HMS Erebus and her sister ship HMS Terror took part in an expedition led by Sir John Franklin to find the long-sought sea route. Both ships’ crews perished in the mission and the ships' final resting places remained a mystery for over 160 years. 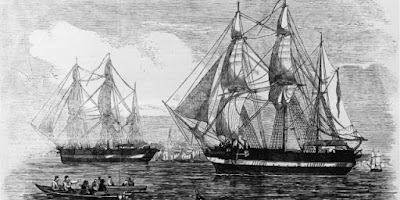 Parks Canada and the Inuit Heritage Trust unveiled the new artifacts on Thursday.
“The findings from HMS Erebus during the 2019 Franklin research mission will contribute to a better understanding of historical and Inuit accounts of the Franklin Expedition and help establish a clearer picture of the living quarters of the crew on the lower deck of the ship,” said Parks Canada in a statement. 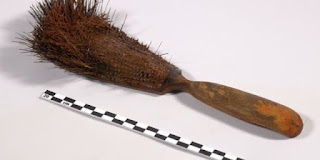 The recovered artifacts are currently undergoing preliminary analysis – a process that includes identifying the physical characteristics of each object as well as scaled illustrations, x-rays

The wreck of the Erebus was finally located in 2014, amid much fanfare, and the Terror was found two years later. The ships, which were among the most sought-after prizes in marine archaeology, are the subject of multiple songs, poems and novels.
The wrecks have even sparked talk of a modern "curse."

A hairbrush was discovered in one of the officer's cabins on the HMS Erebus. Some human hairs were recovered from the bristles. DNA analysis may identify the brush's owner. (Parks Canada)

What happened to most of the ships' crew members, however, is still unknown. Franklin and 128 handpicked officers and men had set out in 1845 to find the Northwest Passage, the shortcut to Asia that supposedly ran from the Atlantic to the Pacific by way of the harsh, ice-choked Arctic.
Experts believe that the ships were lost in 1848 after they became locked in the ice near King William Island and that the crews abandoned them in a hopeless bid to reach safety. Inuit lore tells of "white men who were starving" as late as the winter of 1850 on Royal Geographical Society Island in the north Canadian territory of Nunavut.

The local community treats the wreck sites with great reverence.
“An Inuit Guardians program, involving Inuit from Gjoa Haven, has been in place since 2017 and leads the protection and monitoring of the Franklin wrecks during the open-water season, in addition to helping integrate Inuit knowledge into Parks Canada’s operations,” said Parks Canada in its statement released this week.

Both wrecks have been designated as historic sites by the Canadian government and a Parks Canada permit is required to access them.
~~~~~~~~~~~~~~~~

This is pretty exciting stuff - these discoveries are hugely significant and I am sure analysis will offer more clues to what happened to the ships and the men. When more is found (probably during the summer months) we will bring you this fascinating continuing story. Stay tuned!


Posted by Maritime Maunder at 7:59 AM No comments: