24 July 2022: Hope everyone is enjoying the nice warm temps! Beastly hot pretty much everywhere this past week. Friends in the UK (London) mentioned their bedroom never got below 86 degrees F - even at night. Terrible! So, while we're thinking of England the hot temps, here's a bit from the Guardian and a really old wreck - the swim should cool you off!

The oldest shipwreck to survive in English waters, dating from the 13th century, has been given the highest level of protection by the UK government after being discovered in Poole bay in Dorset.

The ship, along with its stone cargo including two beautifully carved marble grave slabs, was discovered by a local charter boat operator in 2020, after storms disturbed the seabed close to a busy maritime route. 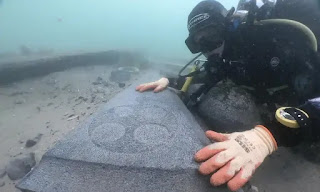 Excavation revealed the “exceptionally preserved” timber remains of one side of its hull, which had been weighed down and protected by the ship’s cargo of worked and unworked Purbeck marble.

Archaeologists were able to identify that the overlapping timbers were made of Irish oak and – using tree ring analysis – came from trees felled between 1242 and 1265, during the reign of Henry III.


While the sites of a small number of bronze age shipwrecks are known from their remaining cargo, their timbers have long gone, making this the oldest wreck in England whose hull survives. Prior to this discovery there were no known wrecks of any seagoing ships in English waters. “This is a really, really important discovery,” said Hefin Meara, a maritime archaeologist with Historic England, which oversees protected wrecks on behalf of the Department for Digital, Culture, Media and Sport.

“This is a ship loaded with cargo on its way out somewhere. It’s a cliche but it’s a time capsule – this is a ship doing exactly what it was intended to do. And we can learn so much from that.”

The two carved grave slabs are similar to examples still seen in churches of the period, but unlike them are in pristine condition, with their chisel marks still clearly visible. Each is decorated with a different style of cross, which until now archaeologists thought dated from different periods, says Meara.

“But this goes to show that actually these designs were contemporary and in use at the same time. And so the question is: are these things that have been made to order? Or are they speculative and being sent out?

“This is evidence of industry – they’re quarrying the stones, carving them, dressing them. And it shows that these are really desirable products [being] exported far and wide, all around the coast of England, to Ireland, to the continent. And this gives us a really interesting indication that it’s not just the stone itself that was desirable. It’s the skills of the local craftspeople.”

Two other newly discovered wrecks have also been given the same level of protection by the government. Both were found on the Shingles Bank near the Isle of Wight, a well-known navigational hazard for ships sailing past the Needles into the Solent. While these wrecks are not as old – dating from the 16th and 17th centuries – they are also “exceptionally rare”, according to Heritage England.

The older ship, labelled NW96, was carrying a cargo of lead ingots dating from before 1580 and stone cannon balls. The ingots, of a fixed size and weight, would have been used as a currency for trade and later made into anything from bullets to lead pipes or roof flashing.

Several cannon were found on the other Shingles Bank vessel, NW68, one of which was cast in Amsterdam between 1621 and 1661. Archaeologists believe the ship was probably Dutch in origin, and may have been involved in the Battle of Portland in 1653 during the first Anglo-Dutch war.

Like the Dorset wreck, both these vessels were found by local divers with a detailed knowledge of the sea, which Meara said was “just really exciting”: “It’s great to have this partnership between ourselves and recreational divers, boat keepers and archaeological companies. It just goes to show what happens when we’re all working together. We make these fascinating discoveries.”

Posted by Maritime Maunder at 10:51 AM No comments:

17 July 2022: Hi folks! We're baaaaaaack! Sorry for the hiatus last week - my family took me to the wilds of West Virginia's mountains to celebrate the conclusion of my 80th year! It was beyond memorable with some fun activities; but the best part was spending time with my sons, their wives, and the grandkids without the distractions of "life" (including writing a blog!) getting in the way! So, thanks for your understanding!

In today's post, we will tell you about the discovery of the deepest U.S. Navy shipwreck found thus far. A destroyer, USS Samuel B. Roberts sunk in battle in the Pacific. From Agence France Presse:

A US navy destroyer sunk during World War II has been found nearly 7,000 metres (23,000 feet) below sea level off the Philippines, making it the world's deepest shipwreck ever located, an American exploration team said.

The USS Samuel B Roberts went down during a battle off the central island of Samar on October 25, 1944 as US forces fought to liberate the Philippines -- then a US colony -- from Japanese occupation.

A crewed submersible filmed, photographed and surveyed the battered hull of the "Sammy B" during a series of dives over eight days this month, Texas-based undersea technology company Caladan Oceanic said. 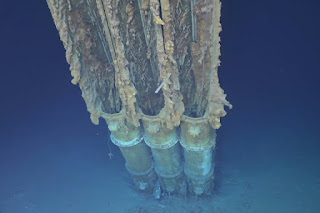 "Resting at 6,895 meters, it is now the deepest shipwreck ever located and surveyed," tweeted Caladan Oceanic founder Victor Vescovo, who piloted the submersible.

"This small ship took on the finest of the Japanese Navy, fighting them to the end," he said.

According to US Navy records, Sammy B's crew "floated for nearly three days awaiting rescue, with many survivors perishing from wounds and shark attacks". Of the 224 crew, 89 died. 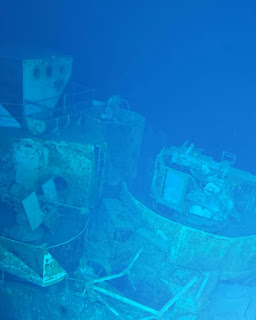 The battle was part of the larger Battle of Leyte, which saw intense fighting over several days between US and Japanese forces.

Sammy B was one of four US ships sunk in the October 25 engagement.

The USS Johnston, which at nearly 6,500 metres was previously the world's deepest shipwreck identified, was reached by Vescovo's team in 2021.

In the latest search, the team also looked for the USS Gambier Bay at more than 7,000 metres below sea level, but was unable to locate it.

It did not search for the USS Hoel due to the lack of reliable data showing where it may have gone down.

The wreck of the Titanic lies in about 4,000 metres of water.

Amazing searchers can find a wreck in such deep water. And how would you have liked to be one the survivors of the sinking floating in shark-infested waters for three days awaiting rescue! Puts one in mind of the Indianapolis sinking (see previous post). At least the water was more or less warm!

Posted by Maritime Maunder at 10:52 AM No comments: