26 June 2017: A quick update: In a final race today in Bermuda, Team Emirates New Zealand put the final bullet into the American Oracle team with a a necessary last win to take the Cup to the Southern Hemisphere. The rules called for "first to 7 wins" and NZ went 7-1.... 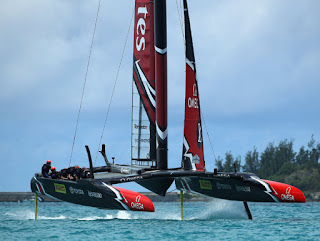 Now New Zealand will be in a position to change the race rules (within the bounds of the Deed of Gift). There is a possibility (some of us hope) that the next challenge will be in "real" boats - i.e. monohulls. While the "flying catamarans" were surely exciting to watch, it was not the America's Cup racing sailors have grown to love over the last 180 or so years! Further, it was somewhat dismaying to realize there was not one American sailor on Oracle - the American boat! How sad!

In any case, Maritime Maunder offers a most sincere congratulations to Team Emirates New Zealand on a sensational victory! We will await with baited breath to see what happens next! 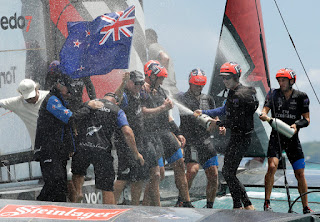 22 June 2017: Hokulea (Hōkūle‘a), a deep sea voyaging canoe, returned to Hawaii this past Saturday (17 June) after sailing 40,000 miles around the globe on a mission of good will. It is likely that many of you missed is, in light of the America's Cup races in Bermuda getting much of the sailing world's attention. 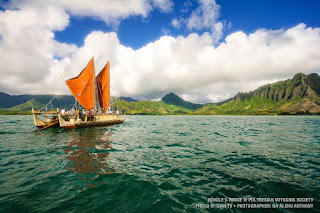 
“The mission of the Mālama Honua Worldwide Voyage is to weave a lei of hope around the world through sharing indigenous wisdom, groundbreaking conservation and preservation initiatives while learning from the past and from each other, creating global relationships, and discovering the wonders of the Island Earth.”

The voyage began in May 2014 when Hokuleah departed from O’ahu (you might have read about it it -and her arrival in New York in Maritime Maunder) and sailed with a fleet of seven deep-sea voyaging canoes from Hawaii, Tahiti, and New Zealand. The homecoming celebration honors the multicultural journey and connection with people all over the world.

“It is the realization of decades of hard work and planning on behalf of the Polynesian Voyaging Society crew and our partners and friends around the world to embark on the final leg of Hōkūle‘a’s voyage and return home,” said Nainoa Thompson, president of Polynesian Voyaging Society. “Watching Hōkūle‘a crest the waves of O‘ahu’s south shore as she returns home, much like the canoes of our ancestors, will be a once in a lifetime experience. We are overwhelmed with emotion at all we have accomplished during this historic voyage and we look forward to setting sail on the next chapter together.”

The grand homecoming will include a welcoming celebration with over 50,000 people expected to attend. The event’s inspirational speaker series will feature local and global speakers who have engaged with the Voyage including: Megan Smith, 3rd chief technology officer of the United States; Dieter Paulmann, founder of Okeanos Foundation for the Sea; and Ocean Elders Sylvia Earle, Jean-Michel Cousteau, and Don Walsh.

And (on an unrelated note) for those of you who might who might have missed it, the first 4 races of the America's Cup were sailed last weekend in Bermuda and all four went to Team Emerates New Zealand. More racing this weekend. Stay tuned for updates here.

Until next time,
Fair Winds,
Old Salt
Posted by Maritime Maunder at 2:18 PM No comments:

15 June 2017: Well, it's official. After nearly a month of some pretty exciting racing, Team Emirates New Zealand wins the right to once again face Larry Ellison's Oracle for top honors in the world of sailing: the America's Cup. There has been some spectacular racing in Bermuda with some amazing spills and upsets - which, let's face it friends, is what this new age version of America's Cup racing is all about. While surely thrilling to watch, your humble scrivener would like to see a return to the original concept of the Cup races with national amateur crews, equipment, and boats. But here is what we have now and maybe the concept of interesting more people is a good thing!

A summary piece from Sail Magazine gives the story:


On a light-wind day that saw Race 1 thrown out when neither team made it to the finish within the 25-minute time limit, Emirates Team New Zealand fulfilled pre-regatta expectations by becoming the official challenger for the America’s Cup.
The 5 – 2 win over Sweden’s Artemis Racing sets the stage for a re-match of the 34th America’s Cup regatta on San Francisco Bay back in 2013, when Oracle and skipper Jimmy Spithill came back from a 1 – 8 deficit to win 9 – 8.


“We feel like we’re in great shape to take on Oracle now,” says Kiwi helmsman Peter Burling. “Artemis has been an amazing partner. They’ve pushed us incredibly hard…. They’ve put us in good shape for the Cup. We’re here to bring the Cup back to New Zealand and that hasn’t changed. We’ve gone through a lot of adversity…. We’re super-excited to take on Oracle.”
Of course, it’s one thing to express confidence safe and sound on dry land, quite another to show confidence in the heat of battle.
On the plus side, the Kiwi team is an almost entirely new one, with former Kiwi helmsman Dean Barker most noticeably absent after being let go and then signing on with Softbank Team Japan (which went down to the Swedish boat in the first round of the playoffs). In other words, with the exception of wing-trimmer Glenn Ashby, they weren’t actually there to watch Spithill and company reel them in and then clean their clock.
Not so encouraging is the fact that while ETNZ has pretty much had its way with the rest of the challengers, the same can most definitely not be said for the Defender of Record, Oracle. In fact, in the Kiwi’s last race of the Qualifiers—which was also the last race for Oracle before it dropped out to let the top four challengers duke it out in the playoffs—they lost to Oracle for the second time, thereby also ceding Oracle the overall win in the qualifiers.


In fact, the only team to defeat the American boat at this stage of the regatta has been Artemis.
The Kiwis may also have a bit of a psychological Achilles heel with respect to heavier weather after capsizing midway through their most recent series again the Swedish team, while nothing seems to phase Spithill short of a punch in the face—and even then as veteran boxer, odds are he’d shake it off in short order.
Then again, the Kiwis seem to be exceptionally fast in lighters winds, and there are few things more demoralizing than watching your competition going speeding away as if by magic in a drifter.
We’ll all just have to wait and see. The America’s Cup regatta itself begin this Saturday, June 17.

There will be local TV coverage, live, I believe, so check your local listings for times and channel. It's bound to be exciting!

Posted by Maritime Maunder at 7:17 AM No comments: