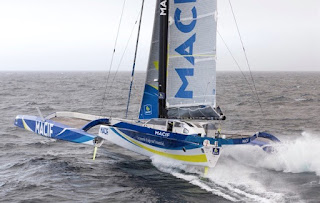 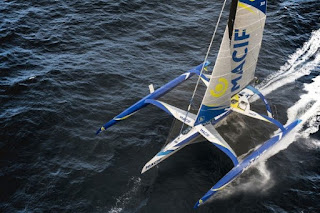 Until next time,
Fair Winds,
Old Salt
Posted by Maritime Maunder at 8:35 AM No comments:

15 November 2017: Cruises are becoming increasingly popular as great way to have a vacation, see a lot of different places, and only unpack once! And since the Costa Concordia had its little mishap a few years (January 2012) back, we aren't aware of any cruise ships (at least) sinking. That said, we thought this piece by Sue Bailey in the Canadian Press might be of interest.

ST. JOHN'S, N.L. — There were outraged headlines around the world when about 80 women and children were left to die in the freezing North Atlantic off Newfoundland as crew members raced to save themselves.
It was Sept. 27, 1854. The luxury ship Arctic had collided in heavy fog with the steamer Vesta off Cape Race, N.L., killing an estimated 350 people.
Editorial writers and readers were incensed over the blatant violation of what is today considered an increasingly archaic custom — women and children first. Public anger over the Arctic helped shape that almost mythic tradition of nautical gallantry in the face of death, but it was still an inconsistent practice in the decades that followed.

It is now widely seen as anachronistic, a sort of Victorian throwback with no legal weight, said Roger Marsters, curator of marine history at the Maritime Museum of the Atlantic in Halifax.
"It's certainly not a rule that has any force in international maritime law," he said in an interview.  "At its best, it's a custom. But more realistically I think it's an ideal that's espoused more often that it is observed."
Historically, far more men survived shipwrecks than women, and more women survived than children, he said in an interview.
"Titanic's officers and crew actually enforced women and children first."

Just over 700 people would be rescued from lifeboats or makeshift rafts after the so-called unsinkable ship went down after striking an iceberg April 15, 1912, about 600 kilometres off Newfoundland's southeast tip.
More than 1,500 people died. They included almost 80 per cent of male crew whose discipline has been immortalized in plays and movies about the great ship's sinking.

Overall, the survival rate on Titanic for men was around 20 per cent, compared to about 74 per cent for women and 52 per cent for children.

The cry "women and children first" is initially traced to the wreck of HM Troopship Birkenhead off South Africa after it struck a reef and sank on Feb. 26, 1852. On board were more than 600 military personnel, including members of the Queen's (Second) Royal Regiment of Foot.
The captain ordered that 25 women and 29 children be launched in a cutter, one of the few lifeboats available. Accounts of that night describe how troops who mustered on listing decks as the vessel began to tilt, her stern rising, obeyed orders not to move until those passengers were safely away.


Rudyard Kipling hailed their sacrifice in the poem "Soldier an' Sailor too" with the line: "But to stand and be still to the Birken 'ead drill is a damn tough bullet to chew."

The Arctic disaster off Newfoundland two years later was notorious as a very different, "every man for himself" response.
Newspaper accounts said several of the Arctic's lifeboats capsized in rough waters as panic erupted despite the captain's attempts to restore order. There were reports that crew members seized remaining lifeboats, leaving about 80 women and children to die.
A study in 2012 by Swedish economists at Uppsala University suggests what happened on the Arctic was no isolated incident. It analyzed 18 maritime disasters from 1852 to 2011 involving more than 15,000 passengers and crew from 30 countries. It found that women had a survival advantage over men in just two of those incidents — Titanic and the Birkenhead.
In 11 other shipwrecks, women were at a disadvantage. In five more, there was no clear distinction.
"Indeed, we find that crew members have a relative survival advantage in nine of the 19 disasters," wrote co-authors Mikael Elinder and Oscar Erixson.
Crew are likely to be more familiar with the vessel, have emergency training and get early details of danger, the study noted. Men are also often physically stronger than women.
"In the evacuation of a sinking ship, success is typically determined by the ability to move fast through corridors and stairs, which is often made difficult by heavy list, congestion and debris," the study said.
Captains with ultimate authority onboard set the tone in a crisis, it says. Francesco Schettino was captain of the Italian cruise liner Costa Concordia that partially sank after hitting rocks off the island of Giglio on Jan. 13, 2012, killing 32 passengers and crew. He was sentenced to 16 years in prison for manslaughter, causing a shipwreck and abandoning ship.
Schettino would later say that, as chaos broke out during a frantic evacuation, he slipped and landed on the roof of a lifeboat.
There is no legal requirement that women and children get priority during rescues at sea, says maritime lawyer Peter Swanson of the Vancouver-based firm Bernard LLP.
"It's sort of a Victorian-era custom that developed late in the 19th century," he said in an interview.
It could also raise a Charter of Rights challenge if applied in modern times, Swanson added.
"Women today obviously are viewed as much more able to take care of themselves."
~~~~~~~~~~~~~~~~~~~~~~~~~~~~~~~~~~~~

As a matter of interest, the views expressed in this article are not necessarily those of the management of Maritime Maunder.


Posted by Maritime Maunder at 11:27 AM No comments: