22 November 2018: Last year, in a spate of disasters that beset the U.S. Navy, civilian merchant vessels ran afoul of Navy Destroyers. Now it's happened again, only this time, to a Norwegian Frigate in essentially home waters.This story his been in the national news across the world but here it is somewhat encapsulated for you with a consolidation of images from before, during, and after the tragedy. From an assortment of sources;
~~~~~~~~~~~~~~ 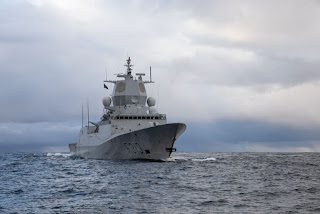 In the early hours of Thursday morning, the Helge Ingstad was approaching the Sture oil terminal near Bergen, headed inbound for Haakonsvern. The Aframax tanker Sola TS was departing the terminal and headed outbound. According to local reports, Sola TS observed the Ingstad visually shortly after leaving the dock and called her via VHF to determine her intentions. The VTS station at Fedje also corresponded with the Ingstad. Despite the radio communications, the two vessels collided at 0403 hours, damaging the frigate above and below the waterline and injuring eight of her crewmembers.


The Ingstad was disabled by the accident, and the Norwegian Navy took the decision to push her onto the shore near the Sture terminal in order to prevent her from settling into deeper water. Her crew abandoned ship without further incident and mustered at Haakonsvern for debriefing. 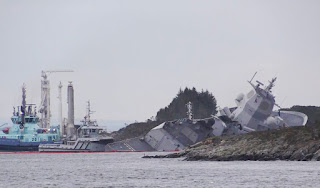 After continued sturggles, the Frigate is lost. While salvage remains a possibility, the Norwegian government has yet to offer a statement on it. 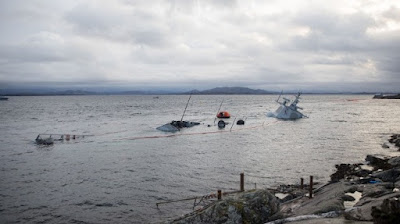 To our U.S. readers, and U.S. residents around the world who follow Maritime Maunder, we wish you a most happy Thanksgiving - and try to be grateful for what you have, not carping about what you don't have (and probably don't need!)


Posted by Maritime Maunder at 8:07 AM No comments: 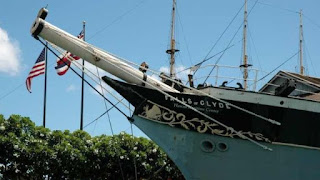 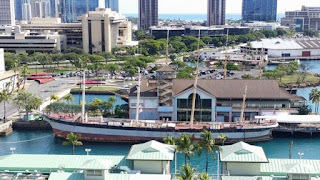 
Posted by Maritime Maunder at 1:51 PM No comments: