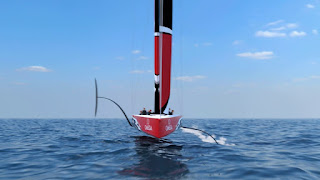 Fair Winds,
Old Salt
Posted by Maritime Maunder at 6:28 AM No comments:

18 July 2018: From 18th century warships to the most modern 21st Century racing vessels in one breath-taking week! But we thought a bit of modern technology might be of interest to some of our readers - even though the next America's Cup competition is some years off..... it takes a while to develop, test, and train in new boats. (for my money, I would go back to J's or even 12 Meters, but that's just my opinion.)
For context, we are going from this:

to this: Wow! Here's the discussion and some of the specifications and rules, courtesy of America's Cup Media. And I admit, it is really confusing to any without some kind of technical background!

The 62 page AC75 Class Rule defines the parameters within which teams can design a yacht eligible to compete in the 36th America’s Cup. It regulates all aspects of the boat to ensure fair and exciting racing, whilst leaving plenty of freedom for innovation to flourish.
The rule is a "box rule" with the overall hull length being 20.6 metres which coverts to 68.5ft and if you add in the bowsprit the length grows to 75ft - hence the AC75 moniker.
Draft with the arms down is a maximum of 5metres. Beam is a little unusual in that it not specified, however the pivot points of the foil arms is specified at 2050mm from the centre giving a distance between the points of 4100mm - the tolerance is extremely tight on the distance between the pivot points - at just +/-2mm per side. The hull outside that measurement looks to be free area, but with little point - just adding drag and weight.
The hull shape is controlled with a couple of beam measurements at points 17m and 19m from the transom where the hull cannot protrude more than 1600mm and 1000mm respectively - the effect is to stop a skimmer or scow type hull being designed.
Building a hull that is too small is countered by a minimum volume "the hull surface shall enclose a volume of at least 70 m3".
Other measurements also apply however within those constraints the hull design is free.

An interesting way of controlling hull alterations is the use of IEGS files which must be submitted when the boat is first floated, and then resubmitted after each alteration. It is then a relatively simple task for the Measurement Committee on a computer screen to check the exact changes made and whether those lie within the allowed percentage change.
The sailmakers are back in business with each boat being allowed 10 mainsails and 29 jibs. The sails in turn are constructed of "skins" which can be replaced and altered.
The mast will be a one design spar to a supplied drawing package and will have two tracks on the after edge of the D-section spar to take the luff rope of the double skinned mainsail.
All standing rigging is also supplied.
The new AC75 is also good news for the carbon batten business with eight battens being allowed per main and jib. Inflatable battens are banned.
The development of the Class Rule has been a four-month process led by Emirates Team New Zealand, working together with Luna Rossa Challenge.


Highlights of the AC75 Class Rule include:
- Strict limitations on the number of components that can be built including hulls, masts, rudders, foils and sails, thus encouraging teams to do more R&D in simulation and subsequently less physical construction and testing
- Supplied foil arms and cant system to save design time and construction costs
- Supplied rigging
- One design mast tube
In addition, the ‘soft wing’ mainsail concept that has been developed for the AC75 Class Rule is expected to have a trickle down effect on sailing in the future.
The crew size is restricted to 11, without any quota specified for female sailors. The sailing crew must average 90kg with a maximum weight of 990kgs. There is provision for a "guest racer" who can weigh in at 100kg maximum.
The new has extensive provisions about the specification of materials allowed to be used in the hull construction, which is an attempt to control costs of construction and eliminate the use of exotics materials and processes.
Overall hull length must be between 20.600 and 20.700 metres. Maximum draft (with the foil arm lowered to maximum cant angle) is 5.00metres.
All control systems must be operated by the crew by either using a control surface or a control system. It is not permitted to receive "feedback" from a yacht state - ie a sensor or other control on the yacht.
Crews can only use hands as the primary "force input devices".
Foil Cant Systems may only be driven by battery power. Batteries will be supplied.
The hull will feature tight sections which the crew will not be allowed to enter.
“The AC75 Class Rule sets the parameters for the teams to develop and race the fastest sailing monohull on earth. The rules are the result of a close collaboration and a true partnership between Emirates Team New Zealand and Luna Rossa,” said Martin Fischer, Design Coordinator for Luna Rossa Challenge. 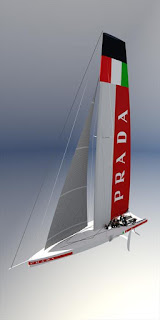 “This marks a definite milestone and a turning point from developing the rule to developing the boat,” said Dan Bernasconi. “Overnight we have to completely change our thinking, from trying to write a fair rule, to doing our best to design the fastest boat within the constraints of the rule. We have to stop thinking about what we intended the rule to mean, and start trying to pick it apart for what the words actually say - and see where there might be room to squeeze some advantage.”
This will be the same for the best minds in yacht design and technology across all of the teams who will begin to reveal their innovations 31 March 2019 when the first AC75 yachts can be launched.

For a bit more detail and to listen to the heads of the teams, click the link below:

It appears to us here at Maritime Maunder than at least some of the rules above represent a return to true "one design" racing as well as having "real sailors" in the crew instead of computer whizzes! Sadly, there is no mention of crew or yacht being solely from the country represented - or amateurs.

Until next time (when we will try to refrain from being so technical!),

Fair Winds,
(a totally confused)  Old Salt
Posted by Maritime Maunder at 7:51 AM No comments: