6 October 2014: After several articles regarding the Navy - ships and birthdays - a reader suggested I offer some insight into the "birthplace" of the Navy: Whitehall, New York. Some years ago, I was giving a lecture in Salem, Massachusetts and at the conclusion of the prepared remarks, as is my habit, I took questions from the audience. In an effort to claim some local "bragging rights" one of the audience asked which was the birthplace of the Navy - Marblehead (booo!) or Salem (yea!). I actually surprised myself when I answered "Neither; it was Whitehall, New York." Silence from the audience. And then some began to laugh, chiding the questioner with something like, "he got you there, bud!"
I had seen the sign at Whitehall laying claim to being the birthplace of the Navy in many trips to Vermont for skiing and naturally felt they had a justifiable case. 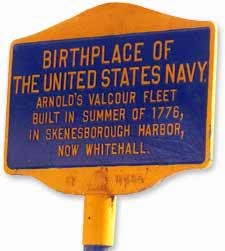 As the sign points out, Benedict Arnold (before he sold out to the British at West Point) received orders to have built in Skenesborough New York (later Whitehall) a fleet of gunboats to defend Lake Champlain, specifically Valcour Island, from British invasion. He did and met the British fleet off Valcour. While he did not beat them, he did effectively delay them from getting down to New York long enough to give Washington time to more fully fortify the city and Manhattan.
With most of his boats destroyed by the British fleet, and realizing he was defeated, Arnold scuttled the remain boats and got away with his men.
So, with the federal mandate to build a fleet, albeit a small one composed of small craft, Whitehall has a justifiable claim to the title of "Birthplace of the US Navy."

As a matter interest, Arnold's gunboats sank almost intact, upright, with masts standing up. His "flagship" Philadelphia was discovered in 1935, virtually intact, by Lorenzo Haggulund, who raised it and displayed it as a tourist attraction with minimal conservation and no rules about touching, climbing on, or anything one might expect today. In 1964 it went to the Museum of American History. There are others on the lake bed, found and mapped with ROV's (remote underwater vehicles) but not yet raised. The cold water, lack of organisms to eat the wood, and depth, have protected the wrecks from too much deterioration.

This is the restored Philadelphia 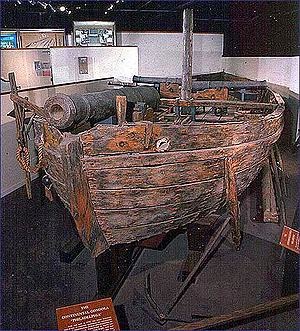 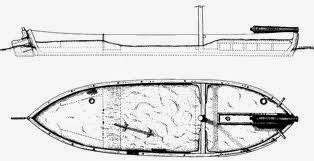 A sketch of how one of the other gunboats rests on the bottom. 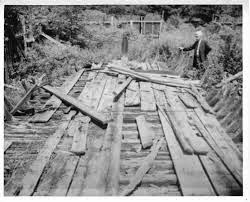 A photo of how the boat was originally displayed! Can you imagine!

Here is a photo of a reproduction of the 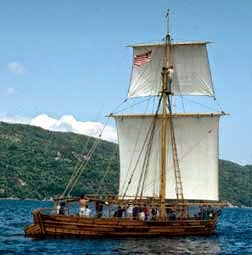 Philadelphia:
So, that's why Whitehall New York claims the title, Birthplace of the U.S. Navy . . . . but, wait a minute! Look here: 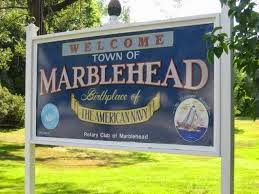 Hmmm. Success has many fathers!

". . .this first time when a sail truly filled and the boat took life and knifed across the lake under perfect control, this was so beautiful it stopped my breath." Gary Paulsen  Caught By the Sea
Posted by Maritime Maunder at 7:41 PM