29 May 2017: Our readers are pretty "heads up" people; I am sure all are aware of what's happening in Bermuda now and has been all spring. Yes, the Americas Cup is being contested in the 50' ACC (Americas Cup Class) yachts. 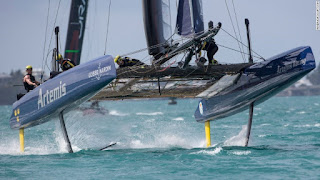 Well, yachts is maybe not the right word, exactly, as these vessels are hardly what you might enjoy a leisurely Sunday afternoon sail on! No, these boats are athletically sailed and designed for one thing and one thing only: speed. Their races have been described as "NASCAR on the water" or "Formula One racing" without the cars! Here is a recent CNN piece which explains it all much better than I could.
~~~~~~~~~~~~~
The boats are space-age rocketships, rising out of the water to fly on foils, powered by towering wing sails, and crewed by "superhumans."

It can only be the 35th America's Cup, which began Friday in Bermuda.
The latest edition of sailing's most famous competition is a far cry from yesteryear, when sleek but sluggish monohulls dueled offshore.
It is being dubbed "F1 on water" and the similarities are obvious - eye-watering speeds of more than 50 mph, cutting-edge design and materials, intensive telemetry and data-driven development, and inshore racing close to the fans.
The prize is the Auld Mug -- the sterling silver America's Cup itself -- first awarded in 1851 and known as the oldest trophy in international sport.

The event begins with the Louis Vuitton qualifiers, a round-robin matchracing competition from May 26-June 3 before the knockout series of challenger playoffs from June 4-12. 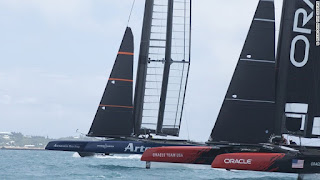 The America's Cup Revolution has seen the shift to stadium-style racing, in venues like Bermuda's Great Sound.
The 35th America's Cup between the victorious challenger and defender Oracle Team USA (which also takes part in the qualifiers) is scheduled for June 17-18 and June 24-27.
Each race will last 20-25 minutes and involve several upwind and downwind legs on Bermuda's Great Sound before finishing in front of the America's Cup race village.
This "stadium racing" is an evolution of the last Cup in San Francisco Bay in 2013 and is designed to be more fan and TV friendly to attract a new audience.
"From a sailing perspective and also a fan perspective it is a great thing to bring the racing in close," says America's Cup chief executive Russell Coutts, a three-time Cup-winning skipper.
In another break with tradition, all six teams have been racing against each other in practice on the Great Sound, throwing up some early contenders and generating plenty of gossip.

It's been a time of intrigue and scrutiny as hands are revealed for the first time. Have they been showing their full potential? Probably not. Are they all up to speed? Not yet. Are there upgrades to come in equipment and new crew configurations in the pipeline? You bet.
The Defender
Oracle Team USA, skippered by Australian Jimmy Spithill. The Americans, bankrolled by Larry Ellison, are aiming for a three-repeat after that remarkable 9-8 victory from 8-1 down against Team New Zealand in San Francisco. The team includes Australian Olympic Laser gold medalist Tom Slingsby as tactician.
The Americans have appeared quick in practice, but they suffered a scare recently when they capsized, although no-one was hurt and no damage was done to the boat.
"We've shown that we are a hard team to close out. We're going to fight until the final race, win or lose. The other teams know that," Slingsby said.
The Challengers
Emirates Team New Zealand are seeking redemption for their defeat-from-the-jaws-of-victory loss four years ago.
They have a new skipper in Australian Glenn Ashby, a multihull expert who won the Cup with Oracle in 2010 and was part of the Kiwi crew under Dean Barker in San Francisco. New Zealander Peter Burling, a gold medalist at Rio 2016, will be on the helm.

The New Zealanders sparked a flurry of pre-Cup gossip with the introduction of pedal-powered cycling-style grinders to drive the winches instead of arm-operated ones.
They suffered a blip in practice recently when Land Rover BAR hit their boat in a maneuver, losing a day of training for repairs.
"We know Ben well, he is a good guy but frustration is obviously getting to him and the red mist came down and it's a lot of damage in a time we can't afford it," said Team NZ chief executive Grant Dalton.

Land Rover BAR is the entry of four-time Olympic champion Ben Ainslie, who was instrumental in Oracle's win last time. The Briton's oft-stated goal is to take back the Auld Mug to the UK for the first time since the inaugural event around the Isle of Wight in 1851.

Ainslie has assembled a largely homegrown outfit which draws on the F1 prowess of its chief executive Martin Whitmarsh, the former boss of McLaren Mercedes.
Land Rover BAR won the 2015-2016 World Series warm-up circuit, but has struggled with the pace of some of the other teams in practice in Bermuda.
Ainslie played down the incident with Team New Zealand, calling it a "love tap."
"I wouldn't lay my cards down on who's got the speed or not until we start racing in the qualifiers," Ainslie told CNN.
"That will be the true gauge of where the teams are. Then even through that series and into the playoffs and the Cup itself, teams need to be developing if they are going to be successful."

The team were devastated by the death of Percy's Olympic partner Andrew Simpson in a tragic accident in San Francisco ahead of the last Cup, but they have been the form team in practice in Bermuda this spring with their boat dubbed "Magic Blue."
The team is skippered by Australia's London 2012 gold medalist Nathan Outteridge, with his Olympic crewmate Iain Jensen as trimmer.
"Our speed is quite comparable with the top teams but that counts for absolutely nothing." says Percy.
"It's all about the relentless chasing after improvements and in this team we are very motivated to keep pushing."

SoftBank Team Japan is a new entry to the competition, but has at its helm Kiwi veteran Barker, a winner in 2000 who will be sailing in his sixth America's Cup.
Japanese sailing great Kazuhiko Sofuku is also on the team alongside countrymen Yugo Yoshida and Yuki Kasatani. Britain's Olympic bronze medalist Chris Draper is tactician and sailing team manager. The team have worked closely with Oracle in the build-up.
"Every day you go out on the water everyone is still improving at a very rapid rate," Barker told AmericasCup.com.
"It definitely rings true for us that there are always gains to be had right from the first race to the last race that you do."

Groupama Team France is another newcomer and is led by round-the-world and offshore sailing great Franck Cammas.
The multihull expert and winning Volvo Ocean Race skipper nearly lost his foot when he was thrown under the foils during a training accident in 2015.
The French are considered underdogs in Bermuda with a learning curve described as "exponential" by grinder Nicholas Heintz.

The boats
The boats are essentially identical 48-foot -- reduced from 72ft in 2013 -- twin-hulled catamarans with a 77ft high rigid wing sail, which rise out of the water on hydrofoils the size of surfboards to sail three times faster than the speed of the wind and more than 50 mph.
The America's Cup has always been about pushing the limits of technology in sailing, and foiling is no exception.
The cutting-edge design element comes in the foil packages, and the systems developed to move the hydraulic power around more efficiently.
With no stored power, all the energy to drive the hydraulics, which adjust the wing and lower and raise the daggerboards which support the foils, must come from the crew.
Foiling -- when the hulls rise out of the water -- is the fastest way to sail as it reduces friction.
It was first introduced in 2013 when the Kiwis spotted a loophole in the laws, and forced the other teams to scramble to catch up. It has since exploded across every discipline of sailing.
The optimum state is "stable flight," when the boat maintains a consistent platform on its foils, particularly through turns. Foiling gybes (when the stern passes through the wind) became the norm in 2013, foiling tacks (bow turns through the wind) are now the holy grail.
"The game changer for me was foiling, we got lucky really," Percy told reporters at a news conference on London.
"Not only did it provide speed, which was apparent immediately, but it allowed racing to be very tactical because boats could turn very fast without losing speed."

The Crews
The AC 45Fs are manned by a crew of six, broadly divided into the roles of helmsman, wing trimmer, a tactician who doubles as a grinder and three other grinders.
Rules limit the total crew weight to 525kg, meaning an average of 87.5 kg per man (they are all men).
Teams tend to save weight in their rear two sailors (helm and wing trimmer) to add to the engine room (the grinders). In pre-2013 Cups grinders were 100kg-plus giants capable of short bursts of power.
Now, endurance is key as they need to keep grinding for the entire duration of a race.
Training programmes have changed accordingly and sailors have become elite endurance athletes, and in the case of Team New Zealand, elite cyclists.
"It's beyond anything physical I've ever done," Percy told CNN.

The following video from the Bermuda news service will provide a glimpse into what these boats do so well - go fast!
Click Here:
ACC's sailing in Bermuda

So to say the next couple of weeks will be exciting is a bit of understatement. Regardless of who ultimately wins (and the outcome is far from certain), it will be fun to watch. Check your local TV listings for times of coverage.

That's is for now, friends. Until next time,
Fair Winds,
Old Salt

Posted by Maritime Maunder at 1:05 PM No comments: