7 OCTOBER 2014:  Getting away from the salt water for a moment or two now. Today is significant in that it was on this date in 1816 that the first steam-driven paddlewheeler - double decked on top of it - arrived in New Orleans. The design would prove essential for the shallow waters of the western rivers and would revolutionize trade and transport in the west. 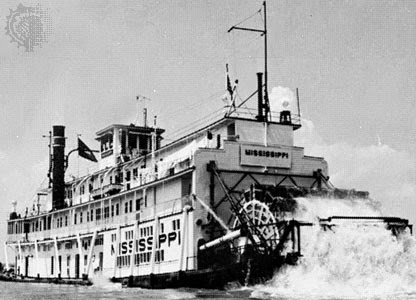 While the image here is not the Washington, it representative of the style: shallow draft, stern mounted wheel, tall chimney, high pilot house, and powered by high pressure steam.

Washington was designed and built by Henry Shreve who launched his ship on the Monongahela River near Pittsburgh. His design proved the concept and the ship began regular runs between New Orleans and Louisville Kentucky. She could make 16 kts up river (against the current) fully loaded with cargo and passengers and downriver, a blistering 25 kts was possible!
By the 1850's, the peak of the paddle wheeler era,over 700 steamers plied the waters of the Ohio and Mississippi Rivers and carried over 3 million passengers every year! Settlers heading west often, if they could afford the passage, took a paddle wheeler on the first leg on their journey, then going overland from Independence, St. Joseph, and Council Bluffs.

By the later part of the century, the western steamboat had been eclipsed by rail and diesel towboats hauling barges. But the iconic paddle wheeler had made its mark.

Here are a couple of the modern day reproductions. I am told by those who have experienced the trip, it
is worthwhile and fun! 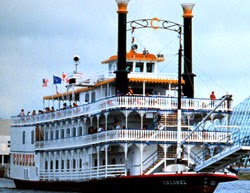 "I must go down to the sea again, to the lonely sea and the sky, and all I ask is a tall ship and a star to steer her by."John Masefield Sea Fever