28 January2019: While we're on the subject of "finding stuff"(see last week's post if you don't see the connection!), here's a very current discovery from our friends in the UK from an article by James Rogers/AP:
~~~~~~~~~~~~


The long-lost remains of Captain Matthew Flinders, the explorer credited with giving Australia its name, have been discovered in London. 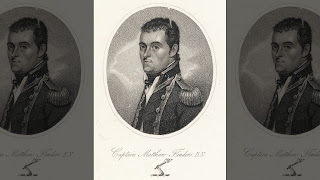 Experts uncovered the grave of the celebrated Royal Navy captain as part of an archaeological dig prior to construction work for the HS2 high-speed railway project. Flinders’ remains were found in St. James’ burial ground near Euston Station in Central London. 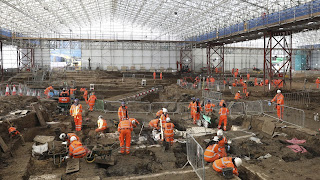 In 1802 and 1803, as commander of HMS Investigator, Flinders became the first known person to circumnavigate Australia, confirming its status as a continent. In his book, “A Voyage to Terra Australis,” the explorer was also first to consistently use the name “Australia.” While others had used the term before him, Flinders’ work is credited with its gradual adoption. Previously, the continent had been known as “New Holland.” 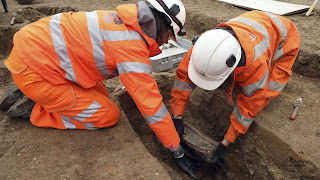 Archaeologists identified Flinders’ remains by the lead plate placed on top of his coffin. He was buried at St. James's burial ground in 1814 but the headstone was removed in the 1840s, leaving the precise location of his grave a mystery.
“Following the expansion of Euston station westwards into part of the burial ground in 1840s, Flinders’s headstone was removed and it was thought that his remains had been lost,” explained the HS2 project, in its statement. “For a long time, there was an urban myth that Cpt. Flinders was buried under platform 15.” 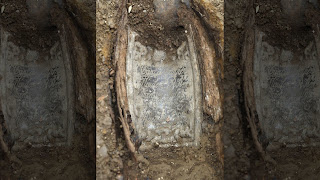 A number of places in Australia have been named after the celebrated navigator and cartographer, including Flinders Station in Melbourne and the town of Flinders in Victoria. A statue honoring him was unveiled in London by Prince William on the bicentenary of his death in 2014.

“The discovery of Cpt. Matthew Flinders’s remains is an incredible opportunity for us to learn more about the life and remarkable achievements of this British navigator, hydrographer and scientist,” Helen Wass, head of heritage for HS2, in the statement. “He put Australia on the map due to his tenacity and expertise as a navigator and explorer.”
Experts, however, were surprised to find the grave, given that the burial ground contains 40,000 other human remains.
“We weren’t confident that we were going to find him,” Wass added. “We were very lucky that Cpt. Flinders had a breastplate made of lead meaning it would not have corroded.”

A note to our readers: please do not credit Captain Flinders with the discovery of Australia; indeed, that right has generally been given to James Cook who, in 1770, laid claim to Eastern Australia for Great Britain, naming it New South Wales. He landed in what is called Botany Bay with his ship HMS Endeavour. But even he could not claim "discovery," as between 1606 and 1770 over 50 European ships had made landfall there. So, its existence wasn't exactly a secret! But Captain Cook does get credit for claiming the island continent for Britain. And Britain made good use of it: following the conclusion of the American Revolution, England, having lost her "dumping ground" for criminals whose crimes were not overly egregious, set up a prison colony in New South Wales.
So Captain Flinders gets the credit for calling the continent Australia as well as discovering it was, in fact, a continent.


Posted by Maritime Maunder at 11:39 AM No comments: