24 December 2022:  Well, here we are again. Christmas is upon us and Mother Nature is making sure we know! 7 degrees this AM with a 30kt wind - bloody cold it is. But here on the East coast at least there's no snow! Even sunny Florida - southern Florida that is, showed 41 deg this am! Brrrr...

One of our favorite posts is this poem bu Robert Louis Stevenson called Christmas at Sea. As we have mentioned before, he gets it. Anyone who has sailed in the cold can appreciate his words! 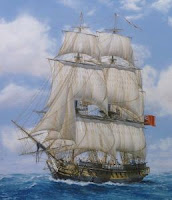 The sheets were frozen hard, and they cut the naked hand;

The decks were like a slide, where a seaman scarce could stand;

The wind was a nor’wester, blowing squally off the sea;

And cliffs and spouting breakers were the only things a-lee.

They heard the surf a-roaring before the break of day’

But ‘twas only with the peep of light we saw how ill we lay.

We tumbled every hand on deck instanter, with a shout,

And we gave her the main tops’l, and stood by to go about.

All day we hauled the frozen sheets, and got no further forth;

All day was cold as charity, in bitter pain and dread,

For very life and nature we tacked from head to head.

We gave the South a wider berth, for there the tide race roared;

But every tack we made brought the North Head close aboard.

So’s we saw the cliff and houses and the breakers running high,

And the coastguard in his garden, with this glass against his eye.

The frost was on the village roofs as white as ocean foam;

The good red fires were burning bright in every longshore home;

The windows sparkled clear, and the chimneys volleyed out;

And I vow we smelled the victuals as the vessel went about.

The bells upon the church were rung with a mighty jovial cheer;

This day of our adversity was blessed Christmas morn,

And the house above the coastguard’s was the house where I was born.

And well I saw the firelight, like a flight of homely elves,

Go dancing round the china plates that stand upon the shelves.

Of the shadow on the household and the son that went to sea;

And O the wicked fool I seemed, in every kind of way,

To be here and hauling frozen ropes on blessed Christmas Day.

They lit the high sea-light, and the dark began to fall.

“All hands to loose t’gallant sails,” I heard the captain call.

“By the Lord, she’ll never stand it,” our first mate, Jackson, cried.

She staggered to her bearings, but the sails were new and good,

And the ship smelt up to windward just as though she understood;

As the winter’s day was ending, in the entry of the night,

We cleared the weary headland, and passed below the light.

And they heaved a mighty breath, every soul on board but me,

As they saw her nose again pointing handsome out to sea;

But all that I could think of, in the darkness and the cold,

Was just that I was leaving home and my folks were growing old.

Let me close out by wishing everyone a most happy and healthy season and new year. It has been a pleasure being in your lives this year. See you in 2023!

Posted by Maritime Maunder at 9:34 AM No comments:

16 December 2022:    Christmas looms and, with the season, comes a perennial favorite - at least of ours - and so without further ado, we present the U.S. Navy string band's version of "Dueling Jingle Bells. Enjoy:

It's always a fun view! We'll be back with another Christmas fave just before Christmas.... until then, be safe and watch out for rampaging reindeer!

Posted by Maritime Maunder at 11:35 AM No comments:

8 December 2022: Sorry for the delay in getting this week's (last week's?) post out - unforeseen circumstances conspired - along with some level of lethargy, travel, and pre-holiday stuff - to keep us from the computer. But here we are with an exciting bit of news from the Pacific Northwest.

Some of you regulars may recall a post we did several years ago on the SS Central America and Tommy Thompson, the (now) incarcerated engineer/inventor/ salvor who found and recovered artifacts and gold from the ship sunk off Hatteras. The following is the story of the Pacific version of that tale. Gold rush folks, gold, artifacts and really cold deep water. From Fox News:

Researchers have discovered the shipwreck site of one of the deadliest maritime disasters in the history of the Pacific Northwest and are releasing details of the almost 150-year-old find.

Maritime archeologists with the group Rockfish Inc. say they have found the shipwreck of the S.S. Pacific which sank in November 1875 and claimed more than 300 lives and is believed to have left only two survivors.

The ship left Olympia early in the morning on Nov. 4, 1875, and made several stops picking up several wealthy passengers related to the Pacific Northwest gold rush of the 1870s. Researchers believe that valuable artifacts, including gold, could be hidden in the wreckage.

"One of the two survivors his bunk was right at the point of impact, he said it was gushing in and 20 minutes, 30 minutes later the ship was on the bottom," Jeff Hummel of Rockfish Inc. told the outlet about the wreck which occurred after a "mid-water collision" off the coast of Cape Flattery.

Eyewitness accounts of the wreck, which many have attempted to locate over the years, detail a terrifying ordeal when passengers were trampled during the panic on board, and lifeboats were inoperable after they had been filled with water to balance the steam powered ship.

Hummel says the team of more than 40 people, which operated alongside the Northwest Shipwreck Alliance, spent countless hours and over $2 million on 12 expeditions between 2017 and 2022 trying to locate the wreck and was ultimately successful after studying locations where fishermen found coal in their nets while trawling for fish.

That information, paired with decades of archival research that was complicated by a historically violent storm hitting the region around the time the ship went down, helped the team pinpoint a location roughly 40 miles south of Cape Flattery and 23 miles offshore.

The team created two remotely-operated vehicles that took side-scan sonar images, which they later confirmed with optical cameras, to identify the ship and the crew's hopes the "world-class find" will yield anything from unopened wine bottles, clothing made of leather or wool, and other artifacts that will help tell the story of those who perished on board.

"It looks so different than anyone ever expected," Hummel said. "Initially, it looks like the wrong size, shape and everything. You slowly work through using the robots, imaging things and looking at it that eventually we realized: ‘Oh wait, that is the ship.’ It took a while."

The next step in the process will be recovering items on board the ship which is work the crew says will begin in 2023 or 2024.

"We believe the wreck to be in a state of incredible preservation and hope to find a wide variety of artifacts from bottles of wine to leather boots to wool clothing," Phil Drew of the Northwest Shipwreck Alliance told Fox News Digital. "There are records of the Express Cargo on board including gold from the Cassiar Mining District of northern British Columbia. There's still years of hard work ahead to excavate the wreck, taking the appropriate care to recover and preserve artifacts. Stay tuned!"

There will likely be more from the Pacific Northwest on this and if possible, we'll keep you informed. But an exciting story with so much more to be told!

Until next time, (and possibly one of our favorite Christmas time perennial posts)

Posted by Maritime Maunder at 12:26 PM No comments: