AROUND THE WORLD IN 80 DAYS

28 January 2021: Well, it's over and again a nail-biter finish! Vendee Globe around the world race is in the record books and for the second (race) year in a row, the top finishers came in within hours of each other. Until the leaders had actually crossed the line, no one knew who actually won due to time corrections. As it turned out, it was not the boat that actually crossed first. From several European sources, the following amalgamation:

Frenchman Charlie Dalin was the first to cross the finish line first off Les Sables d'Olonne, western France, on Wednesday evening at 8.35 pm CET, surrounded by an armada of boats that glittered in red, green and blue. 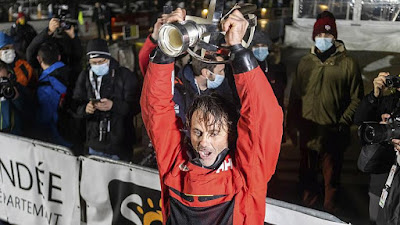 The 36-year-old, who led the ranking for more than half of the course aboard his latest generation flying boat, had to wait to see if he would be declared the winner of the 2020 Vendée Globe.

Two other competitors, the German Herrmann, who arrived third, and Bestaven, who came in fifth, also crossed the line were also in contention for the race.

Greeted by 300 volunteers, Dalin said: "For sure it has changed me, I don't know in what way yet... it's so many emotions, it's incredible emotions, it's emotions of a strength that I had never felt before..."

Third-placed Burton said: "It's a great joy, a great pride to be among the first to cross this finish line. (It is) seven days less than four years ago [when he finished 7th], 75 days more than eight years ago because I had given up after five days".

Both skippers had time compensation in hand for helping to rescue competitor, Kevin Escoffier, whose yacht sank in heavy seas off Cape Horn on November 30.

These bonuses - six hours for Herrmann and 10 hours and 15 minutes for Bestaven - could only be taken into account once the line had been crossed.

This was Bestaven's second attempt after he lasted just 30 hours in 2008. The 48-year-old, from La Rochelle, finished eight hours behind leader Dalin but snatched victory thanks to his time bonus.

"We go from total solitude to this party, these lights, these people who are there despite the complicated context," Bestaven said after his victory.

"It's a joy, I don't realise yet what's happening, I'm still in my race, even though it's over. It's a child's dream come true."

With a time compensation of 10 hours and 15 minutes, awarded by an international jury for his role in the search and rescue of fellow competitor Kevin Escoffier, Bestaven takes overall victory.

Finishing 2hrs 31mins 01secs ahead of Charlie Dalin and 6hrs 40mins 26secs of Louis Burton who both finished ahead of him and take second and third respectively.

Germany’s Boris Herrman was in contention for a podium position until he struck a fishing boat at 90 miles from the finish line. He is bringing his Seaexplorer-Yacht Club de Monaco to the finish at reduced speed.

The standings as of today:

These men (and women) are ferocious competitors and obviously infused with an inner strength that is almost incomprehensible to most of us. Congratulations to these finishers - a significant accomplishment in itself!

Until next time - and maybe some America's Cup news by then!

Posted by Maritime Maunder at 8:09 AM No comments:

24 January 2021: Sorry for the delay - time just got away from us and the weekly update quite escaped us! We've kind of been focused on the goings on in New Zealand (America's Cup and the problems experienced by the US NYYC team following their disastrous capsize) and the Vendee Globe race for which we hope to be able to report the finish in our next post - they're getting close now.

But here we are now and with some amazing pictures of the salvage operation on the Golden Ray car carrier capsized in Georgia (USA). This is a monumental project and the pictures, we think, are staggering, showing the immense scope of the project. Following from Car and Driver magazine.

The saga of the Golden Ray continues. Once a simple cargo ship plying the seas, the 656-foot-long vessel made the news in September 2019 when it capsized off the coast of Georgia near Saint Simons Sound with around 4200 new vehicles on board. It’s been sitting on the shallow ocean bed since then while plans to extract the ship and its contents from the scene were developed and, now, finally, implemented. 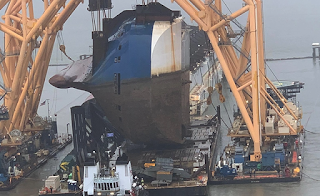 That’s why, all through November, salvage workers were getting ready to slice the ship into eight smaller pieces in order to move them back to shore. A giant chain powered by two large engines made the first cut through the keel this weekend. This work required a giant piece of equipment called the Versabar VB 10,000 crane vessel that was first built a decade ago to help with oil rigs damaged in hurricanes.

As the salvage of the Golden Ray cargo ship continues off the coast of Georgia, workers on the night of January 2 completed the operation to separate the stern from the rest of the ship. Next they'll load it into a "specially devised cradle" on a barge deck and haul it off to a recycling facility in Louisiana, the local Brunswick News reported on Sunday. In the end, the 656-foot-long ship will have been cut into eight pieces, the paper said. Meanwhile, there are some 30 vessels out patrolling the waters around the capsized ship on the lookout for oil leaks and other environmental issues, while an "environmental protection barrier" around the ship has mesh netting underneath it to catch loose vehicles—and vehicle parts—that drop out of the wreck. "Plastic debris and car parts from plastic pumps to wheel panels also were seen washing up on shore," the Brunswick News noted.

So, if you are in the market for a car and don't mind a bit of water damage (a bit?) and can do a little cleaning up, we might have a deal for you! Please note that some of the vehicles might be a bit bent!

Until next time, when we hope to bring you the finish of the Vendee Globe Race, stay safe.

Posted by Maritime Maunder at 9:53 AM No comments: