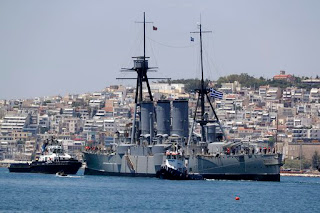 Tugs pulled the 107-year-old battleship Georgios Averof to Trocadero marina in southern Athens on Wednesday, July 26, 2017. Following an intense three months of  maintenance and conservation work, this dreadnought is back in her berth in Athens, where she serves as a floating museum.


A naval band played, attending ships and boats sounded their horns and a naval helicopter flew overhead as Georgios Averof was tugged in to her dock.

Three tugs moved the 10,000-ton former Greek navy flagship from a shipyard in Skaramangas, where the repairs were carried out with private funding, through the straits of Salamis to Trocadero in Athens. 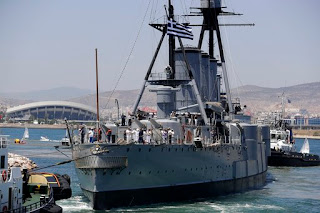 Named after the Greek businessman who partly financed the huge cost of the ship's purchase [an interesting habit! - ed.], the armored cruiser was built in an Italian shipyard in 1910 and was at the time the most feared warship in the Aegean Sea.

The ship served in the Greek navy during the Balkan wars in 1912-1913, playing a leading role in victorious encounters with the Ottoman Turkish navy, helping free a few of the Greek islands in the northeastern Aegean and securing Greek naval dominance in the archipelago.

She also saw active service during World War II, when she was based in Alexandria, Egypt, after the fall of Greece to German forces. After the war ended, Georgios Averof carried the Greek government-in-exile back to Athens.

The Georgios Averof was decommissioned in 1952, and spent the next quarter-century moored, and decaying, on the island of Poros, until the mid-1980s when the navy restored her and made the ship into a museum.


The 460-foot (140-meter) ship will open again to visitors in September, following further refurbishment at its berth (not unlike USS Constitution). The ship boasts an attendance of about 60,000 visitors per year.


PS. Maritime Maunder has now exceeded 65,500 readers! Hard to fathom that! Thank you all!

23 JULY 2017: The day/night has finally come. We have written about the restoration of USS Constitution many times over the past two years while she has been undergoing a major refit in Dry Dock #1 in Charlestown Navy Yard, Boston. Tonight, about midnight, she will be floated out of the dock to return to her berth in the Navy Yard where she will have the "finishing touches" to her remarkable restoration completed. As I have mentioned before, the USS Constitution Museum has had, for the duration of the overhaul, a live camera on the 3rd floor showing a new image of the ship about every 20 minutes. Here is the view from midday today:

As you can plainly see, Old Ironsides is looking new and ready to resume her role as America's Ship of State in Boston Harbor.

The Museum released to U tube a day or so ago a video of the underwater hull of the ship which, after tonight, will (hopefully) not be seen again for 20 years!
Here's the link:

When you view this video, you can see the shiny new copper sheathing, her new draft markings, and her still original keel.

Should you wish to view the refloating tonight, the Museum will be live streaming on Facebook and will also be showing the view from the constitutioncam in the museum. It will likely be a great show!

The address for the Constitutioncam is: https://ussconstitutionmuseum.org/restoration/constitution-cam/  (you have to copy and paste that) and beginning at 1500 EDT today, the image will refresh every 5 minutes.

Posted by Maritime Maunder at 10:10 AM No comments:

14 July 2017: USS Constitution will be completing her 26 month overhaul/restoration and returning to the waters of Boston Harbor in just under 10 days.

It was just over two years ago when the event depicted above took place and USS Constitution entered Dry Dock #1 in Charlestown Navy Yard to undergo her "every 20 year" overhaul.

Her copper sheathing which protected her hull from worms and destructive elements in the sea was removed and replaced - they are small (about 2' square) sheets which must be hammered onto the hull by hand - and she received new draft markings fore and aft. 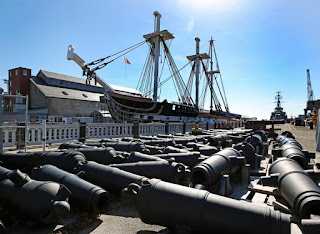 Her guns and their carriages were lifted off, refurbished and new carriages built was necessary.

Her rig was overhauled by skilled artisans of the Naval History and Heritage Command Detachment Boston, replacing or restoring as indicated.

In other words, the ship received a "keel to masthead" refurbishing that will serve her for the next twenty years, when she will again enter the dry dock and do it all again. And, with fresh paint on her topsides, she looks like new once again!

The dock will be flooded and the ship returned to her berth in the Charlestown Navy Yard after dark on 23 July. The USS Constitution Museum has a webcam mounted on the 3rd floor of the their building adjacent to the dry dock which has been showing a stream of pictures taken about 20 minutes apart of the entire process and will surely be showing the refloating process. The site is ussconstitutionmuseum.org for the Museum and simple click on the "constitutioncam" link to view the images. If you find yourself in Boston on 23 July, be sure to stop by the Museum and see the ship, stay for the festivities, and witness a "once in a generation" event of Old Ironsides returning to the water.


Posted by Maritime Maunder at 6:12 AM No comments: 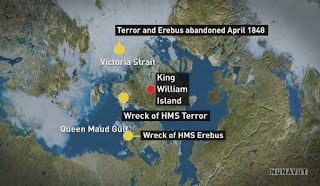 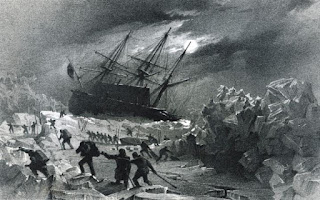 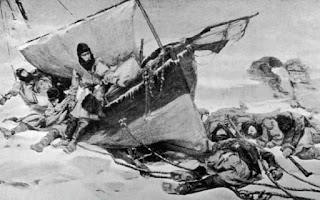 
Posted by Maritime Maunder at 11:14 AM No comments: