30 November 2015: Sorry about the brief hiatus from the blog - I had a medical issue that kept me off the computer for a few days and then it was Thanksgiving here in the United States which of course required travel out of town. So now I am back, and all things remaining somewhat calm, I will try to resume posting interesting items several times a week. I hope the following will entertain you as much as it did me!

The name "manta" is Portuguese and Spanish for mantle (cloak or blanket), a type of blanket-shaped trap traditionally used to catch rays.[3] Mantas are known as "devilfish" because of their horn-shaped cephalic fins, which are imagined to give them an "evil" appearance.[4] 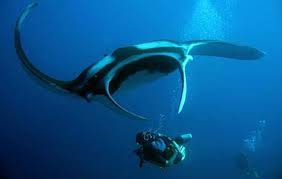 Manta rays are members of Chondrichthyes, fish with tough cartilage rather than bone in their skeletons.[5] Mantas are among the Elasmobranchii (sharks and rays), in the superorder Batoidea (rays and skates) and the order Myliobatiformes (stingrays and relatives).[2] The genus Manta is part of the eagle ray family Myliobatidae, where it is grouped in the subfamily Mobulinae along with the devil rays.[6] Mantas evolved from bottom-dwelling stingrays, eventually developing more wing-like pectoral fins.[7] M. birostris still has a vestigial remnant of a sting barb in the form of a caudal spine.[8] The mouths of most rays lie on the underside of the head, while in mantas they are right at the front.[9] Manta rays and devil rays are the only ray species that have evolved into filter feeders.[2] 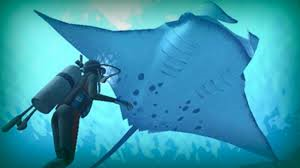 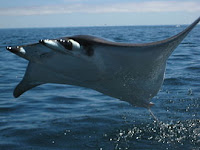 The video link is below:


Click here for the video - and turn on your sound! MANTAS FLYING

Posted by Maritime Maunder at 8:08 AM No comments:

23 November 2015: this is neat and I thank my pals at Gcaptain for sharing it with me:

New video released Friday by Russia’s Defense Ministry shows Russian navy ships launching cruise missiles at targets in Syria, in the Caspian sea, according to Ministry of Defense of the Russian Federation. 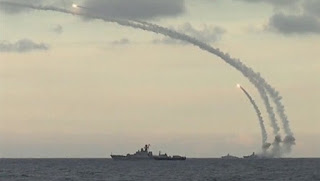 Russian Defense Minister Sergei Shoigu said Friday that warships in the Caspian fleet launched 18 cruise missiles at seven ISIS targets in Syria, killing 600 rebels, RIA news agency reported. (Note: not sure how they arrived at that number, but it sounds good!)

Here's a video of the missiles being launched: (just click the words below:)

More soon, friends! Until next time,

Old Salt
Posted by Maritime Maunder at 10:03 AM No comments:

18 November 2015: About a year ago, we posted a story regarding the CSS Hunley, the world's first successful submarine - successful in that it actually sunk an enemy ship, though it wound up on the bottom itself with its entire crew dead.

You may recall it was discovered in Charleston harbor by Clive Cussler's NUMA group and raised by the Navy in conjunction with civilian contractors. The hulk, remarkably intact and with the remains of the crew inside, was taken to the Warren Lasch Conservation Center in Charleston where an international team began the painstaking task of a: removing all the debris and mud that had filled the hull, b: removing the remains and identifying them, and c: stabilizing the ship for future examination.

This latter included leaching out the salt from the metal and removing the concretion of larine life that had actually protected the hull. Now that's all done. 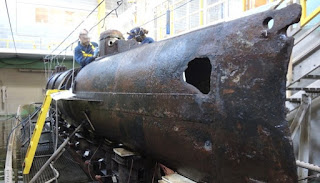 Terra Mare Conservation, the outfit running the show on Hunley, has just announced a collaboration with Clemson University to critically examine the original surface and the interior in detail. This should bring us closer to a realization of just what happened on the night of 17 February 1864, when Hunley, first, sank the USS Housatonic, and then itself sank, killing all hands. More detailed information, discoveries, and results will likely be forthcoming in the near future. Stay tuned!

Fair Winds,
Old Salt
Posted by Maritime Maunder at 7:18 AM No comments:

13 November 2105: Yesterday, I had the privilege of attending a meeting of the Naval Historical Foundation's Holloway Society with a visit to the Naval Surface Warfare Center in Carderock, MD and a luncheon following.


The Surface Warfare Center is home to the David Taylor Ship Model Tow Tank, an amazing facility where hulls are tested in simulated conditions as scale models, some as long as 50 feet,  and are fitted with an array of sensors and towed through varying conditions at different speeds to determine how the real ship, when built, will react to similar conditions. 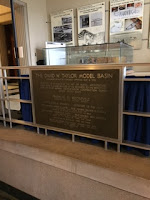 There are three tanks - the longest being 1,200 feet long; one is shallow (about 9') and still water, one is "deep" at 22' but can make waves the scale equivalent of a state 9 sea (about 50'!), and one is for testing high speed hulls. Sadly, there was nothing happening in two of the tanks, but the high speed one was  engaged in testing something and was screened from our view as the classification level was apparently high. And also sadly, due to the restricted security of the space, no pictures were allowed.

Also housed in the facility is PART of the Navy's incredible model collection - the rest of it is scattered around museums and military facilities across the country - and that was most interesting. Many of the models there were built there, and many of the older ones were being restored. What I did not know, but learned at our visit, was that the Navy commissions a model of every new class of ship that joins the fleet. Very impressive. 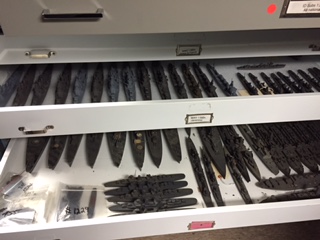 These models, tucked away in a drawer - several drawers in fact - were what are called "recognition models" from previous wars. Used to train lookouts in recognition of enemy ships from their silhouettes, there are literally hundreds of them.

The drawer on top shown here are for Japanese ships.


The model shop was incredible, the workmanship astonishing, and the gents, the artisans, who worked there was most happy to take a moment to explain what they were doing. Here are a few images from the shop: 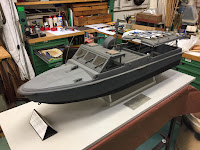 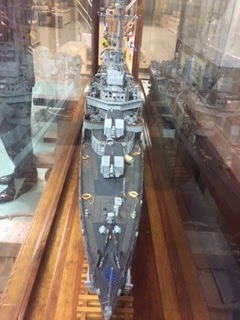 The model to the right caught my eye immediately as  it was a wonderful rendering of the class of ship - 445 Class (Fletcher Class) destroyer on which I spent most of my six years at sea. A fine ship, fast, lots of guns, and nimble. Sadly, there are none left alive, all having outlived their usefulness. On a personal note, the first one on which I served was launched in the same year in which I was born...


Another model which caught my eye was of the USS Wampanoag, a full-rigged ship equipped with a coal fired steam plant and which held the speed record (17.65kts) for some 25 years following her launch. The model was being carefully restored from her original plans, and from the picture (painting) shown beside her. 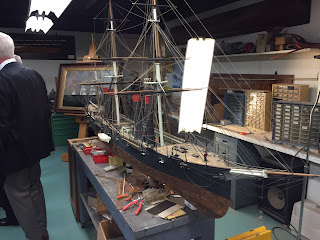 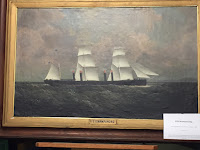 Of considerable interest was the fact that the model shop has its own "rope walk" making scale rope necessary to the rigging of the models! The detail in the Wampanoag model is quite amazing: 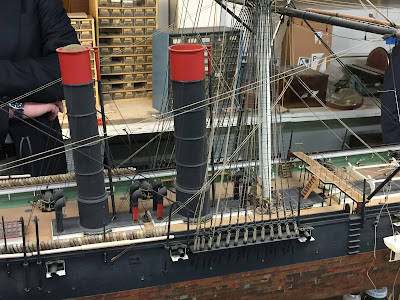 ﻿
Many thanks to curator Dana Wegner for his knowledgeable and generous sharing of the Model Shop as well as his fine presentation at lunch about the sinking of USS Indianapolis.
And thanks also to the Navy Historical Foundation for hosting this enjoyable and interesting program.
Until next time,
Fair Winds,
Old Salt﻿

Posted by Maritime Maunder at 1:04 PM No comments: 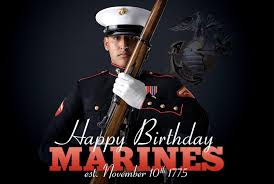 In 1775, the Second Continental Congress passed a resolution requiring "two battalions of Marines be raised" for service as a landing force with the navy fleet. That was 240 years ago and then, as now, the U.S. Marine Corps is the pre-eminent fighting force in the world. They serve on land and at sea; witness that one of their first engagements was an amphibious raid in the Bahamas to take ammunition stores from the British during the Revolution.

They fought in Tripoli during the Barbary Wars (1803-5) and their trek across the desert to attack Derna (now in Libya) in 1805, led to the inclusion of the Mamaluke Sword as part of their uniform. It was modelled after the swords used by the Berber horsemen who fought alongside them. (The Tripoli War is also included in the Marine's Hymn .... "to the shores of Tripoli...")

The Marines also handled most of the Pacific War during WWII, island hopping toward Japan, fighting and taking casualties as they proved to the Japanese their fighting skill and determination. 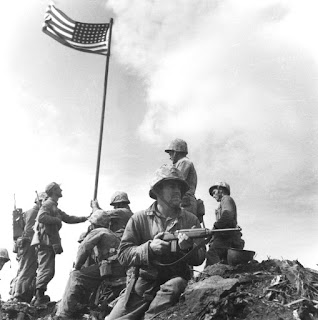 And since tomorrow is Veterans' Day in the U.S. a big "thank you" out to all the Army, Navy, Coast Guard, Air Force, and National Guard men and women who selflessly signed an open-ended contract to defend our country, willing to put their lives on the line for our freedom. And we raise a glass to the memory of our absent comrades!

Until next time, then,

5 November 2015: "The net effect is a degradation of the Navy's ability to provide the balanced presence and surge capacity that Congress has mandated. We have more in depot maintenance today than we would normally have under a stable operational cycle, so we have a shortfall in our ability to generate the forces we need."

So reported US Navy Assistant Secretary of the Navy for Research, Development, and Acquisition Sean Stackley to Congress this week. What does it mean?

Simply, we have a huge gap in our carrier task force capability for the first time in modern history. Where we should have carriers deployed in operating theaters around the world, we don't. Why? Budget constraints! Right now, there is half of our fleet of carriers going through refits/overhauls/refueling. To put that in perspective, consider "that the fleet's carriers won't be able to get back to the prescribed readiness levels—two carrier strike groups deployed at all times, with three additional strike groups ready to deploy if there's a need for a "surge"—until 2018." Shocking, and in the opinion of your scribe, treasonous on the part of our administration. For the first time since 2007, the US will NOT have a carrier strike group in the Middle East right as the stakes get increasingly higher. Now there's a strategy for you!

And how about this: The USS Gerald Ford, the next US aircraft carrier, is being built to replace the now-retired USS Enterprise, which was deactivated in 2013 after more than 50 years of service.

But the Ford's completion has run into delays in part because of the budget sequestrations enacted by Congress. Stackley said the Ford is not expected to join the fleet at full readiness until 2021, which means the Navy will be operating with one less carrier than called for by Congress for the next six years.


﻿ Now, Congress, in its infinite wisdom, has enacted a law that says we must have two strike groups deployed with three additional in a "ready" status, and then cuts off the funding to totally preclude that! Going forward, we will be able to put only one strike group at sea at a time, and next year, there will be periods when we have NO carrier coverage in the Pacific Ocean..... and China is flexing its own muscles with a new carrier itself!

The reduced fleet size means longer deployments for the ships we have operational and the resultant longer, often delayed maintenance yard periods for those same ships.

Posted by Maritime Maunder at 8:03 AM No comments: