22 October 2014: Yesterday we mentioned that the 21st held TWO great anniversaries. 217th anniversary of the launch of USS Constitution and another which we would deal with separately. So, here's "the other" - the Battle of Trafalgar, 21 October, 1805, England's greatest naval engagement and victory, led by the brilliant and often controversial Admiral Lord Horatio Nelson. 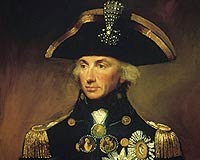 A veteran of an amazing number of historic engagements, Nelson had lost his right arm and his eye in two different battles; those handicaps slowed him not a whit! Sadly, in the victory at Trafalgar, he lost his life and England's sea forces were never again to see his equal. But let's talk about the battle for a moment now.
Britain had been engaged in long running war with France and her sometimes-ally, Spain, fighting at sea as well as on land (Duke of Wellington - the "Iron Duke" - ran the land side of things). Sporadic sea battles had occurred with England coming out on top most of the time but it was, in Nelson's mind, time for something decisive, something that would bring this long war with Napoleon to a close. His "watchers" of the coast of France were keeping the French fleet bottled up and a similar blockade of Cadiz kept the Spaniards likewise trapped in their ports. Through a series of fortunate missteps, both fleets managed to make it to sea and, after a long chase through the South Atlantic and the Caribbean, the English fleet found the fleets of France and Spain combined off the coast of Spain, perhaps hoping to make a run for the Mediterranean. Nelson was in command of the Royal Navy fleet consisting of some 57 ships including HMS Victory, his flag ship, two other 100 gun line of battle ships and 4 98-gun "second rates" and various others vessels all the way down to a 12-gun schooner and a 10-gun cutter.
The Combined fleet of France and Spain, under command of Vice Admiral Villeneuve, brought 68 ships, consisting of 33 ships of the line including several of the largest battleships in the world (at the time) one of which was the 136 gun Santisima Trinidad, and two rated at 112 guns! There were six 80-gun ships (4 from France and 2 from Spain) along with 22 smaller 74-gun ships from both nations. As with the British fleet, the Combined fleet also included a handful of smaller ships, brigs (2 masted) and schooners.

Accepted tactics of the age involved the two fleets sailing parallel within cannon range and pounding each other  until one side either lost too  many ships to continue or surrendered. Nelson changed all that then and for the future. He split his ships into two lines and cut the enemy line into 3 parts with his fleet, thus precluding the enemy from firing broadsides once his ships got between them (there are only a couple of guns mounted in the bow and stern of a ship - most are set along the sides). See the diagram here: 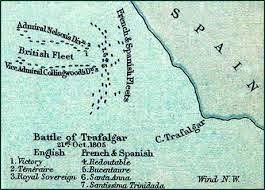 His "go straight at them and board them in the smoke" philosophy played an important role in this battle. The tactic effectively isolated parts of the line, separating them from their flagship's signals and forcing them to leave the battle while they reformed a line. It also allowed the British fleet to close with the enemy more quickly and induced any number of individual ship battles in which Nelson felt confident (perhaps with a bit of well-placed national chauvinism!) the Royal Navy would prevail. Previous tactics also included reducing sail to slow the ship, allowing more time alongside, but it also slowed the rate of approach, leaving Nelson's ships vulnerable to broadsides while getting in position. To ensure his ships got into the fight quickly, he order full sail in each, to be reduced once engaged. His initial signal to the fleet became immortalized - today it would be said it "went viral." The signal, flown in flags from HMS Victory read: "England expects every man will do his duty" and remains today one of the greatest flag hoists ever!


I don't want to give the impression this battle was a "slamdunk" for England! It was brutal, devastating to both fleets in ships and men, and costly. The Combined Fleet lost 22 ships, while the British lost none! 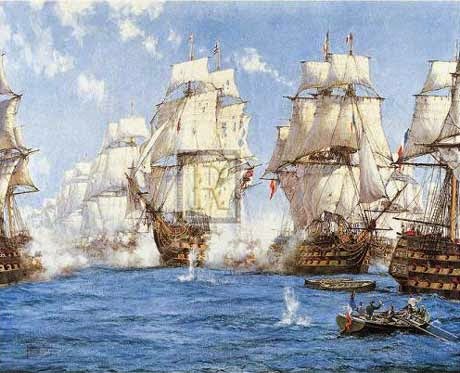 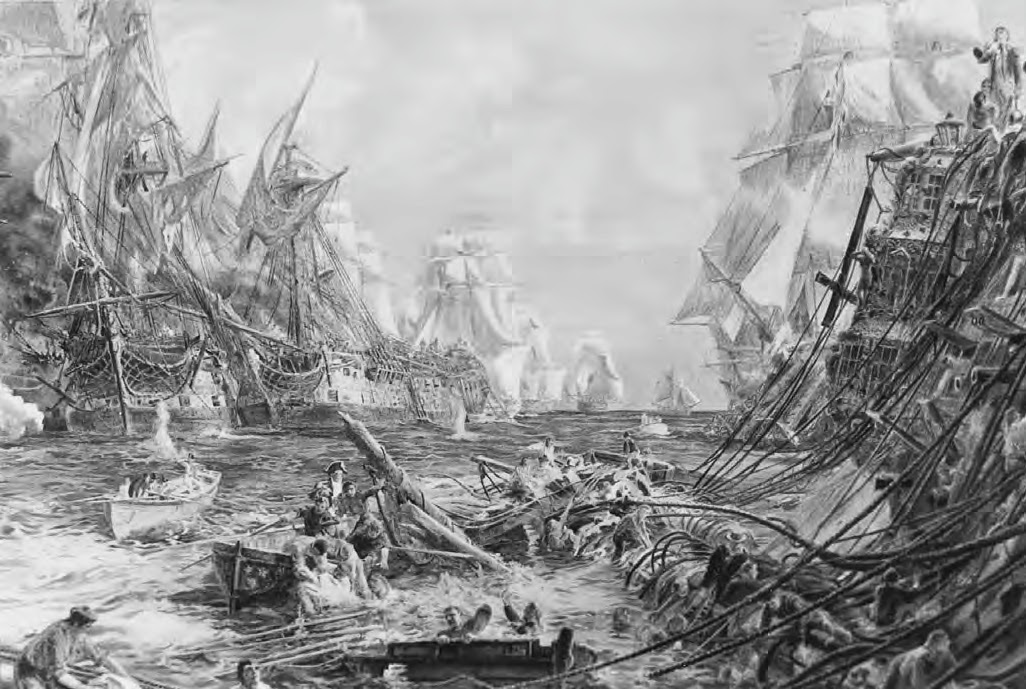 Above is a more modern interpretation of the battle, while a contemporary image is here, to the right.

It should be noted that Admiral Nelson remained on his quarterdeck, commanding and being visible to the men who virtually worshiped him. A French marine, firing from aloft in a nearby ship fired the fatal bullet and Nelson was taken below to die, surrounded by his officers and his doctor. His remains were sealed in a cask of rum (giving rise to several rum based drinks) and returned to England for one of the greatest funerals in English history. Victory, of course, also made it back and today rests in her concrete dock, the "oldest commissioned warship in the world" and open to tourists to marvel at. 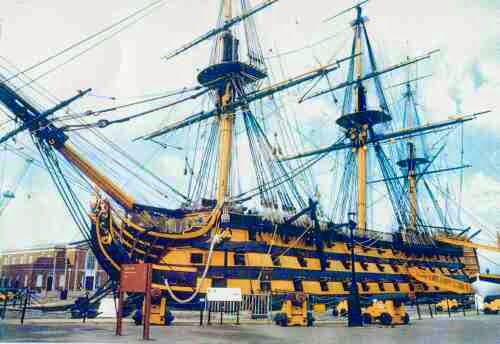 "No captain can do wrong if he places his ship alongside the enemy." Adm Horatio Nelson

Posted by Maritime Maunder at 9:31 AM