30 October 2022:  Tomorrow is Halloween - ghosts and goblins, princesses and monsters, as well as ghoulish prisoners and their keepers will be wandering the streets in search of treats and trouble! The prisoners in today's post got no treats, only trouble!  This will be the first in a two or three part post on the dreadful and feared prison hulks in use by Great Britain in the 18th and 19th centuries. From History Today:

Convicts in Georgian and Victorian Britain experienced notoriously miserable conditions, and perhaps no inmates endured harsher deprivations than those confined on prison hulks. Anna McKay reveals the horrors of these “wicked Noah’s arks”

Early one misty morning in 1855, Henry Mayhew and John Binny stepped aboard a dilapidated ship moored on the Thames. Its large wooden hull was studded with barred portholes; instead of flags, a rudimentary washing line hung between the ship’s masts. The overall impression was one of oppression and decay.

The Defence struck a curious contrast to the gleaming steamboats and sailboats streaming past: for one thing, rather than carrying passengers, it housed convicts. Formerly a naval man-of-war, it was now a prison ship, also known as a hulk.[ed: as often as not, the hulks were hard aground] 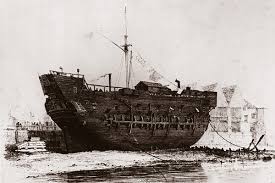 Mayhew and Binny, both journalists and social reformers, had previously toured the prisons of London. They had inspected the solitary cells at Millbank, the exercise yards in Pentonville, and the female workrooms in Brixton. But the hulk system was unlike any other prison they had encountered.

The walls of this one were wooden, barely held together by rot. Led by a warder, the journalists descended into the belly of the ship. Here, each deck was divided by two rows of strong iron railings flanking a central passageway. Behind were open cells festooned with dingy hammocks, providing space for 240 men to sleep on each deck. As Mayhew and Binny looked on, a morning bell sounded and sleeping prisoners sprang into action, stowing hammocks, washing in buckets and scrubbing tables ready for breakfast.

If the scene inspired both wonder and despair in these men, their reactions were nothing new. For decades, prison reformers had protested at the use of hulks. And the Defence was not fit to be a prison, being nothing more than “a rotten leaky tub”.

The highest (average) total of inmates on prison hulks in England in a single year, 1842. Of those, 3,615 were transported to Van Diemen’s Land (now Tasmania), Australia.

The number of 10- to 15-year-olds incarcerated in hulks in England in 1841. Three of these boys were under 10 years old.

The approximate fatality rate of prisoners on board the hulk Justitia who died between August 1776, when it first received inmates, and March 1778. Out of a total of 632 convicts, 167 perished.

The total number of years that a hulk called Justitia operated at Woolwich. The first ship with that name was moored there from 1776 to 1802; its successor of the same name was used for 34 years, from 1814 to 1848.

The number of prisoners held on board the Defence in 1854 who were granted a pardon, out of a total of 819.

When and why was the prison hulk system introduced?

Hulks were first introduced in England in 1776 as a temporary measure to ease overcrowding in prisons. The conflict today known as the American Revolutionary War had broken out the previous year, abruptly halting the transportation of felons – men, women and children – to Britain’s North American colonies. Instead, ever-increasing numbers of inmates were crammed into various types of prisons across the country.

In an attempt to address the problem, parliament passed an act allowing the use of prison hulks, initially for two years. In lieu of transportation, male convicts would be sentenced to hard labour and imprisonment on disused ships on the Thames.

The contract for managing the first hulks, moored at Woolwich, was given to Duncan Campbell, a West Indies merchant and transporter of convicts who was appointed the first superintendent of prison hulks in England. He adapted his own ship, the Justitia, which had previously been used to transport convicts from London and Middlesex to Maryland and Virginia. Tearing down internal cabins, he installed bunks that allowed less than 50cm width for each man. 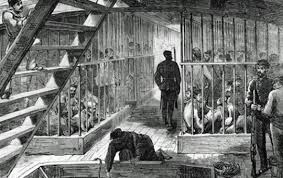 The inmates reacted with horror to their new confinement. “On their first coming on board, the universal depression of spirits was astonishing,” wrote Campbell, “[and] they had a great dread of this punishment.” That depression and dread was well founded. Within months, sickness ripped through the Justitia. Of 632 men incarcerated on that hulk between August 1776 and 26 March 1778, 167 died – more than one in four. Their bodies were buried in unmarked graves on shore, unless collected by relatives – or illicitly passed to anatomists for dissection.

We'll look at more of this horrific practice in the coming weeks but our readers should also be aware that prison hulks were a common sight in New York Harbor during the American Revolution (the American War of Independence). In fact in the recent past, remnants of some - and the graves of the unfortunate (or maybe they were the fortunate ones!) who perished were discovered off today's Brooklyn Navy Yard during some dredging operations. Happy Halloween!

Posted by Maritime Maunder at 11:27 AM No comments:

24 October 2022:  Another soggy day here in the Northeast - but not cold and surely no snow yet! This week just ended marked a couple of anniversaries worth mentioning - one in the United States and one in Great Britain. From Fox News:

The mighty USS Constitution, arguably the most famous warship in American history — a testament to dauntless courage at sea in the nation's infancy — was launched in Boston on this day in history, Oct. 21, 1797.

She serves the United States as a reminder of the fight for national sovereignty, a symbol of our unique-at-the-time constitutional foundations and as the centerpiece of the USS Constitution.

"The ship sailed its first cruise [in 1798] as the Quasi-War with France emerged. Later it served in engagements with pirates off the Barbary Coast in the Mediterranean," the National Park Services writes of the vessel.

The USS Constitution was part of the American fleet that bombarded Tripoli in 1804, a powerful show of force on the global stage of the young nation's naval power.

She remains a commissioned US Navy vessel, still manned by a U.S. Navy crew, making the USS Constitution the oldest warship [ed: oldest afloat - HMS Victory is oldest] in the world.

The frigate, better known as Old Ironsides for her mighty oak hull and masts, was designed by Joshua Humphreys and was built over three years at Hartt's shipyard, in what is now Boston's North End.

The ship was ordered on March 1, 1794, in anticipation of the passage of the Naval Act of 1794, which President George Washington signed on March 27.

She enjoyed her greatest glory and earned her status in the annals of naval warfare during the War of 1812.

"Huzzah, her sides are made of iron!" an America sailor shouted joyfully, as the ship's white oak planks and live oak frame, grown in the swamps of Georgia, repelled volleys of direct cannon fire from British warship HMS Guerriere.

Constitution, under Captain Isaac Hull, destroyed the Guerriere and forced her to surrender in the close-combat sea exchange. The British ship was so badly beaten that Hull scuttled it rather than capture it as a trophy of war.

"Constitution went on to defeat or capture seven more British ships in the War of 1812 and ran the British blockade of Boston twice," notes History.com.

She earned 33 victories at sea, with zero defeats.

The other event - the one in Great Britain - was the anniversary of the brilliant victory against the combined Spanish and French fleets at Trafalgar, orchestrated by Admiral Lord Horatio Nelson, who sadly was killed by a sniper in the battle.

That occurred on 21 October, 1805 off the coast of Cape Trafalgar (Spain).  It was there that the now famous flag hoist, "England expects every man to do his duty" was raised on HMS Victory, Nelson's flagship.

The ship lives on today, albeit in drydock, in Portsmouth's Royal Dockyards, England as the oldest still  commissioned warship in the world.

Posted by Maritime Maunder at 8:22 AM No comments: