25 September 2018: Here is a neat article detailing the completion of a life long dream and the perseverance to complete it. From the News Tribune in Washington state, the story of Tom Crout's project, courtesy of Alison Needles, journalist:
~~~~~~~~~~~~~~~


Tom Crout was waiting for something to go wrong the day he was to launch his new sailboat.
America wasn’t just any sailboat. The 66-year-old South Hill resident built the 30-foot-long wooden craft from scratch entirely by himself.
It took him 18 years.
On July 19, Crout brought the boat to the Swantown Marina & Boatworks dock in Olympia, where it would touch water for the first time.
“I was waiting for a bunch of big leaks and stuff because that’s usually what happens with a wood boat until they swell up,” he said.
“I was nervous for him,” added Daniel Meshke, a neighbor of Crout’s for 25 years who came to the launch. “He put so much work into it.”
But the boat didn’t take on so much as a cup of water.
“When I put it in the water and she floated to the lines where she was supposed to — it was a great feeling,” Crout said.
It was also a bittersweet one, because a lifelong dream was just about complete.


Crout always wanted to build a boat.
At 5 years old, growing up in California, he tried to put one together using scrap wood from a remodeling project at his grandparents’ home.
“Of course, there was no way it was going to float,” he said. “I just always had a desire to build a wood boat for some reason. Call it insanity, I guess.”
Crout has always worked in construction and trade, and remembers taking wood shop and metal shop classes in high school. He’s had a 23-year-long career with RH Smith Co., a general contractor that specializes in remodeling, siding and painting. He works in sales.
In 1990, he moved to Washington state from Texas, where he had a mesquite wood business. He lived in Normandy Park for a year, then moved to his home in Puyallup, where he decided to finally build his boat. 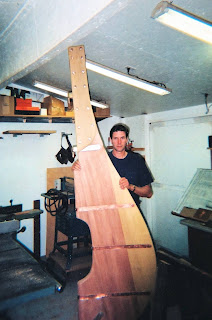 “It took a little bit of thought — like a year or two — before I really committed, because I knew it was going to be a big commitment,” Crout said. “But I’ve always had a desire to build a wood boat and I finally just said, ‘I’m going to do this.’”
18 years in the making
After a lot of reading and research, Crout began building his boat in 2000.
He decided on a Bristol Channel cutter sailboat, which was commonly used between the late 1800s and early 1900s. It was considered a safe, stable and fast boat, Crout said.
First he built a shed on his property with wood bought at an estate sale.
“I went there with one of the biggest U-hauls I could get and I loaded that thing up with all this lumber,” Crout said. “It was really dirt cheap — the whole truckload of lumber for $200.”
Over time, he salvaged and recycled many used pieces for the boat. It saved him money in the long run, and part of the fun was finding the deals.

“If I had it built, it would have cost 10 to 20 times more than I spent on it,” he said. “If you’ve got the patience and you’ve got the time, you can save a bundle.”
When it came to the work, Crout didn’t cut corners. He welded all the fittings and cast his own bronze pieces, including the killer whales and stars. He converted an industrial engine into a marine power plant. One of the hardest parts was securing the wood planks to the ribs of the boat, a job that required 5,000 rivets.
If he needed help with a task, he built a contraption to do it for him.
“You name it, I did it,” Crout said. “The only thing I didn’t do was grow the trees, and God did that.”
He figures that had he used even one helper he could have finished the project in a third of the time.
“But I just wanted to do it myself,” he said. “Some people like to play golf. Some people like to go fishing, which I like to do as well. But it was a hobby.”
The only help Crout accepted was from Meshke, who assisted with some heavy lifting in the beginning.
“Every time I came over there I was always just floored,” Meshke said. “He’s very talented, and the boat speaks for itself.”
A dream realized
Crout wanted to keep America’s look classic, painted white with wooden trim. He used 13 types of wood, including Douglas fir, purple heart, black locust, Honduras mahogany, afromosia, jatoba, cherry pine, yellow cedar, maple and padauk. 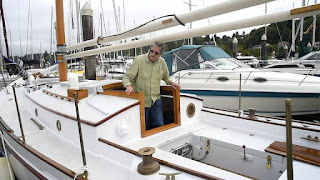 The boat weighs 18 tons and has a 50-foot mast. Its eight-foot-long bowsprit is retractable to save money on mooring space. Crout even made his own dingy.
The companionway opens up to the boat’s cabin, where Crout installed all the basics: a sink, stove, bathroom, fridge, various storage space and a handmade furnace.
Family and friends gathered July 19 for the launch.


Before he takes the boat out of the marina he need to get it insured. For that, he must complete a 20-hour course with a licensed captain.
“I don’t have enough experience on a sailboat,” he explained. “I’ve sailed a little bit, but I don’t qualify for insurance.”
As for the boat itself, now that it’s complete, Crout has no plan to sell it, but he said never say never.
“It’s like that old saying — if offered the right price, I could sell,” he said.
As for his next project, Crout will take down the shed he used to create America.
He noted it would be a nice space for a garden.

Tom Crout spent 18 years working on his sailboat, America, at his South Hill home. He single-handedly made every piece of the 30-foot craft, down to the pulleys and wheels.
~~~~~~~~

A real example of sticking to your dream! Well done, Tom Crout and many happy hours of sailing (once you learn how!)

Posted by Maritime Maunder at 6:05 AM No comments: