23 January 2022: Can you believe that January is almost over? Where does the time go! And this cold weather sweeping across the United States is horrible; even in Florida it's very cool and wetter than normal. Not so sure about this "global warming" we keep hearing about! Seems colder to me!

54 years ago, 23 January 1968, the USS Pueblo (GER 2), an essentially unarmed navy intelligence ship, was captured in international waters by the North Korean navy and the crew held captive for eleven months. Here is the story of that from Military.com.

·       Between 1966 and 1969, the United States was increasingly engaged in South Vietnam, but a few thousands miles away, US troops were still fighting in the previous war. 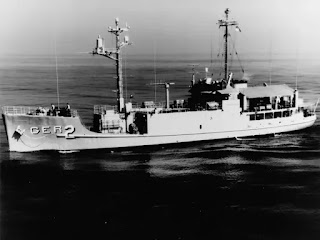 On the Korean Peninsula, North Korea was becoming increasingly bold, firing on American soldiers. Sporadic engagements with the North had occurred along the DMZ since the 1953 armistice that ended the Korean War. This time was different, however, as North Korean attacks began to involve thousands of US troops. It was the closest North and South Korea came to another Korean War. North Korea ambushed American units along the border and even infiltrated South Korea in an attempt to kill the president of South Korea at the Blue House, the presidential residence. Then, on January 23, 1968, North Korea seized the USS Pueblo, an unarmed US Navy surveillance ship operating in international waters. North Korean gunboats, torpedo boats and MiG-21 fighters chased down the Pueblo, killing one sailor and capturing 82 others. The officers and crew of the Pueblo were held and tortured for 11 months. They underwent physical and mental therapy after their release.

Kim Il-Sung's plan completely backfired. Not only did the capture of the Pueblo draw international ire for the North Korean regime, the American military increased its presence on the Korean Peninsula.

As his administration attempted to negotiate for the release of the Pueblo crew, President Lyndon B. Johnson sent six aircraft carriers to Korea, along with massive reserve reinforcements and sent $100 million in military aid to upgrade South Korea's armed forces. But Johnson wanted to avoid another war in Korea, as the US military was stretched thin in Vietnam and elsewhere. Just days after the Pueblo was captured, the massive Tet Offensive began. North Vietnamese Army and Viet Cong soldiers launched a series of coordinated attacks all over South Vietnam.

Most of the assaults on American and South Vietnamese positions either failed or were retaken quickly, but communist holdouts would linger for months after.

The United States admitted the Pueblo intruded into North Korean territory, but only to secure the release of the Pueblo sailors. After their release in December 1968 and to this day, the US government still maintains the ship was in international waters.would not be recaptured until March 1968.

And still she sits, still a US navy commissioned vessel, and a major tourist attraction in North Korea. Be sure to stop by when you visit Pyongyang!

Posted by Maritime Maunder at 10:06 AM No comments:

16 January 2022: Last week we offered a post on the oldest commissioned warship afloat in the world, and this week, courtesy of the British Daily Mail news, we offer a story about the oldest commissioned warship in the world. Period. HMS Victory. Admiral Lord Nelson's iconic flagship from the world changing Battle of Trafalgar in October of 1805. She sits in drydock and is truly a sight to behold and tour. She is finally getting a well deserved rehab.

A £35 million conservation project to renovate HMS Victory which will include replacing rotting planks has been announced on the 100th anniversary of the warship being brought into dry dock. 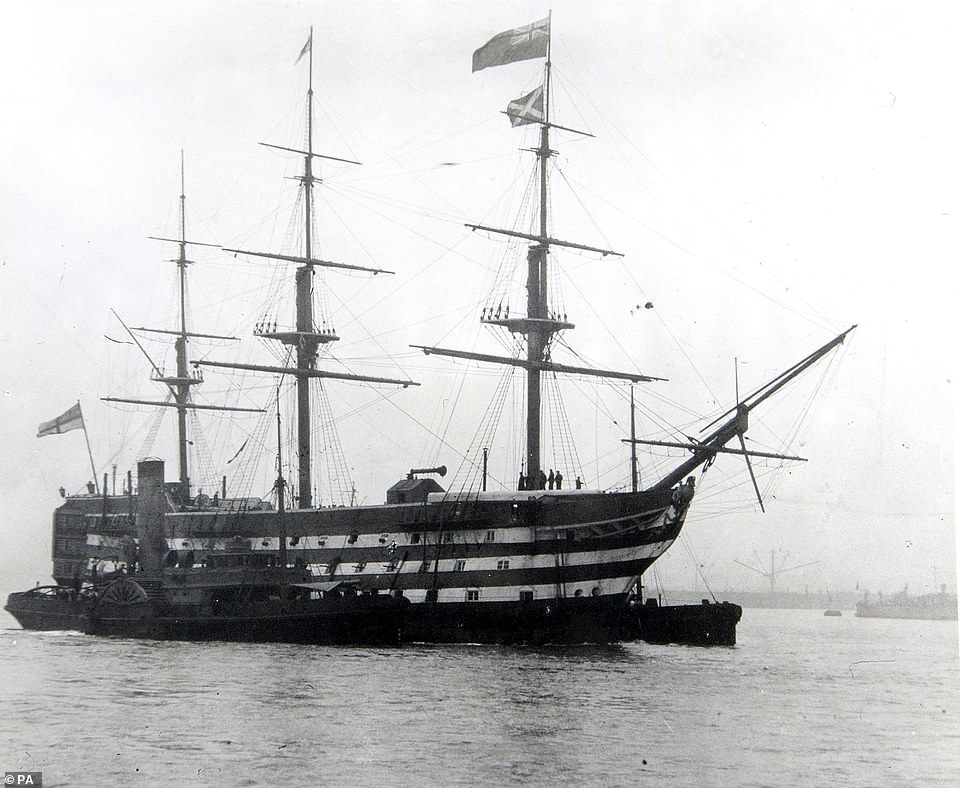 It has stayed there as the world's oldest commissioned warship and the flagship of the First Sea Lord and Chief of the Naval Staff.

A dockyard spokeswoman said that dry dock 2, which is 220 years old, is itself a scheduled ancient monument.

She said: 'One hundred years ago today, on January 12 1922, the world watched as Vice-Admiral Lord Nelson's celebrated survivor from the Battle of Trafalgar was towed from her berth in Portsmouth Harbour and secured into the dry dock.

'First floated out at Chatham in 1765, Victory enjoyed a varied career but by the 1920s was in poor condition and at risk of sinking at her mooring without considerable intervention.

'Later in 1922, on October 21st, Trafalgar Day, the 'Save the Victory' campaign by the Society for Nautical Research was publicly launched and continues to play a hugely significant role in securing the world-famous flagship for posterity.

'Although Victory had been a popular tourist attraction when berthed in the harbour throughout the 19th century, she was opened as a museum ship to the public by King George V on July 17 1928 and has since welcomed more than 30 million visitors.

'Since then, she has welcomed a host of famous visitors including royalty at dinners and balls, and survived a 500lb bomb dropped by the German Luftwaffe during the Second World War.

'The dry dock itself is now part of a greatly enhanced visitor offer for Victory which, in addition to a self-guided tour of the ship, now includes the chance to descend into the dry dock under the enormous hull on a dedicated walkway, weaving through the recently completed and new state-of-the-art support system.'

Victory has been undergoing a 20-year period of conservation including recently having its mast removed, with the next stage of works now being unveiled.

The spokeswoman said: 'Rotting planking will be removed from the hull and replaced with new oak, repairs made to the ship's structural framework, and she will be fully re-rigged, in a process lasting 10 to 15 years and costing £35 million.

'The project will provide visitors with a once-in-a-generation opportunity to see beneath Victory's skin and experience a first-rate line-of-battle ship being taken through a great repair.'

HMS Victory first floated out from the Old Single Dock in Chatham's Royal Dockyard on May 7 1765.

During 206 years in service she would gain recognition for leading fleets in the American War of Independence, the French Revolutionary War and the Napoleonic War.

HMS Victory is renowned for being the flagship of Vice-Admiral Horatio Nelson, Britain's most celebrated naval leader, fighting in the defeat of the French and the Spanish at the Battle of Trafalgar in 1805.

However, her service was not to end here - in 1808 she was recommissioned to lead the fleet in the Baltic, but four years later she was relegated to harbour service - serving as a residence, flagship and tender providing accommodation.

In 1922 she was saved for the nation and placed permanently into dry dock where she remains today, visited by 25 million visitors as a museum of the sailing navy and the oldest commissioned warship in the world.

The HMS Victory currently in dry dock in Portsmouth is the sixth ship to bear the name after five previous ships did so.

Of these, the first two were broken up and rebuilt, two were destroyed by fire and the fifth sank in 1744.

The current HMS Victory was launched in 1759 and commissioned in 1778. 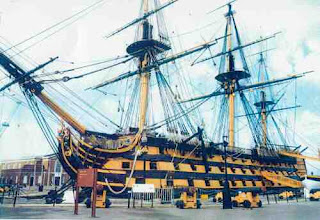 It was used in two battles on the French island of Ushant in 1778 and 1780 as well as the battle of Cape St Vincent near Portugal in 1797.

However its decisive role came in the Battle of Trafalgar in 1805, under the captaincy of Vice-Admiral Nelson who was fatally wounded on board during the conflict.

The ship was taken out of service in 1812 and remained in Portsmouth Harbour until 1922, when it was moved into the Royal Naval Dockyard amid fears for its deteriorating condition.

As this project is scheduled to take up to 15 years, we will most likely not be reporting its completion in this blog, but should anything further develop, we will report it to you!

Posted by Maritime Maunder at 2:11 PM No comments:

9 January 2022: We generally try to avoid "current news" here on Maritime Maunder, (with some exceptions like the Golden Ray story and one or two others), preferring to use historical articles which might be instructional for some of our readers. But this one is surely worthy of sharing in its immediacy. When you read the two stories, posted here via the U.S. Navy, it will become clear. And both in the same week!

Cmdr. Billie Farrell is about to take command of USS Constitution — Old Ironsides — the first woman to do so in the ship’s 224 years.

From serving as executive officer on the Norfolk-based guided missile cruiser USS Vicksburg to command of the world’s oldest commissioned naval vessel marks a step into history.

Launched in 1797, the Constitution saw action against pirates in the Barbary Wars and in the War of 1812, where it won its Old Ironsides title as astonished sailors watched British cannonballs bounce off its wooden hull.

USS Constitution defended American interests at sea for decades after that, retiring in 1855 after serving in anti-slaving patrols with the Africa squadron.

Old Ironsides captured or sank 33 enemy vessels, and was never defeated in battle.

Farrell called USS Constitution an “iconic warship that dates back to the roots of both our nation and our Navy,.”

She said she hopes the strengthen the warship’s legacy “by telling her story and connecting it to the rich heritage of the United States Navy and the warships serving in the fleet today.”

While Farrell will be Old Ironsides’ first female commanding officer, it was another woman officer, Lt. Cmdr. Claire V. Bloom, who as executive officer and led the warship’s historic 1997 sail, the first time it sailed under its own power since 1881.

And now in additional news:

The USS Abraham Lincoln deployed this week from San Diego under the command of Capt. Amy Bauernschmidt, the first woman to lead a nuclear carrier in U.S. Navy history.

Bauernschmidt, who previously served as the Abraham Lincoln's executive officer from 2016 to 2019, took over command from Capt. Walt Slaughter during a ceremony last August, CBS 8 in San Diego reported.

"There is no more humbling sense of responsibility than to know you are entrusted with the care of the people who have chosen to protect our nation," Bauernschmidt said, according to a Navy news release. "Thank you, Capt. Slaughter, for turning over the finest ship in the fleet."

Here at Maritime Maunder, we are impressed with the capabilities of these two senior officers and their achievements. And both attained their respective jobs in the same week! Bravo Zulu ladies!

Posted by Maritime Maunder at 12:56 PM No comments: