29 SEPTEMBER 2014: For some reason, this morning I was thinking about the Twin Lights of Highlands NJ and thought it might be an interesting subject for today's post. The structure is surely an iconic symbol of the New Jersey coastline even though the lights have been extinguished since 1949 when the light house was decommissioned. 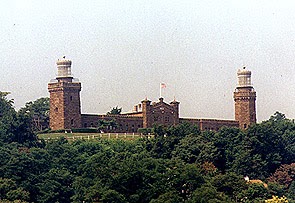 The structure now serves admirably as a museum, but not simply as an old light house. Why? because it's famous and notable in history for being even more than a light house. We'll get to that in a second, but in the header above, I asked "why two of them?" Ok - about 5 miles north of the Highlands there is another light house, Sandy Hook Light which is one of the oldest if not the oldest lighthouse in America (The order to build it was signed by George Washington!). In order to avoid confusion by mariners entering the coastal waters outside New York - and the water off Sandy Hook is fraught with shallows and rocks - the government ordered two lights built 320' apart and established that one of the lights would rotate and the other would remain fixed. The original building was accomplished in 1828, with the current structure standing since 1862. Interestingly, though called the Twin Lights, the two towers are not twins at all!

As you can see from the above pictures one tower is square while the other, the North tower, is 6-sided. I can not offer an explanation for the difference.

In 1854, however, the building was the site of the first telegraph station and was actively used, initially for semaphore telegraphy and later for electronic telegraphy, to communicate with ships entering New York.

OK, you say. Big deal! But this is a maritime site so why are we talking about light houses? Well, aside from the obvious (light houses ARE maritime - there aren't many in Iowa, for example) there is a very good reason and a timely one for this subject today. The AMERICA'S CUP!

In 1899, Mr. Marconi had been messing about with the notion that radio waves could be used to send messages for some years. He drew the interest of the New York Times and a test was set up in September of that year which happened to be a year when the America's Cup was being contested off Sandy Hook New Jersey. On the 30th, Marconi, after setting up a receiver and transmitter at the Twin Lights, went out to sea on a boat to report on the approach of the fleet - both the spectators and racing boats (in those days, the competitors had to get to the race on their own bottoms unlike today!). He found them and sent a message received successfully at Twin Lights. The races went off as scheduled and, on 16th October, Marconi, once again on a boat, transmitted to the Twin Lights and the New York Times, that the American boat, COLUMBIA, had successfully defended the Cup. So there's your maritime connection!


Here's a link for the Twin Lights in case you would like to learn more good stuff about it.           www.twinlightslighthouse.com/

As a matter of interest, there is an annual bike race of 100 miles which starts and ends at the light house. With the location on top of one of the highest points on the east coast, I can only imagine the struggle entailed in getting up that hill after pedaling for 100 miles! It just occurred this past weekend, and no, I did not participate!

"Sometimes night is the most beautiful part of a sailor's day!"  Mary Jane Hayes in Eye on the Sea