23 SEPTEMBER 2014: As promised, here is the second piece of the story and a few pics of something I think is truly extraordinary. The sessions on day 2 continued the theme and quality of the opening programs - we had a few museum management seminars, a very well done panel discussion on the Civil War at sea which included a presentation by Dr. Tim Runyan, who incidentally, chaired the whole conference as chairman of the Maritime Heritage Alliance - a huge undertaking! - and another on what to do with historic vessels no longer viable and one on maritime disasters. A short session which included a video tour of the battleship New Jersey and a peek at some of the "adult" art found within her living spaces was particularly well-attended, possibly because it was listed as "adults only!"
My wife and I played hooky in the afternoon and paid a visit to the Hampton Roads Naval History Museum at the Nauticus Center, a small but well done tour of the navy since the American Revolution. Good presentation, great artifacts, and FREE! The best museum visit, by far, was that evening at the Newport News Mariners' Museum.
This museum boasts a collection of over 35,000 maritime objects including figureheads, navigational instruments, ship models and what I thought truly monumental, some of the major pieces of the Union Ironclad, USS Monitor. You will recall from your history class, I am sure, the battle fought to a draw  by the Monitor and the Merrimack (actually the CSS Virginia), which ushered in the age of iron ships. Called the Battle of Hampton Roads, it proved the efficacy of the ironclad and the vulnerability of wooden ships when confronted by an ironclad. Some 15 years ago, marine archeologists found the wreck of the Monitor in 240' of water off Cape Hatteras. A multi-year recovery project ensued and today, the Mariners' Museum has, being conserved, the turret, the gun, the steam engine, anchor and propeller. Some of them are properly conserved and available for viewing; others, most notably, the turret, engine, and gun barrel are still in conservation, getting the salt residue out of the metal. It is likely, according to the staff I spoke with, take another 12-15 years before those amazing artifacts are stable. But one can see them in the big tanks where they are undergoing this process. Here's a few pic of the gun (note that it's underwater) and the anchor. 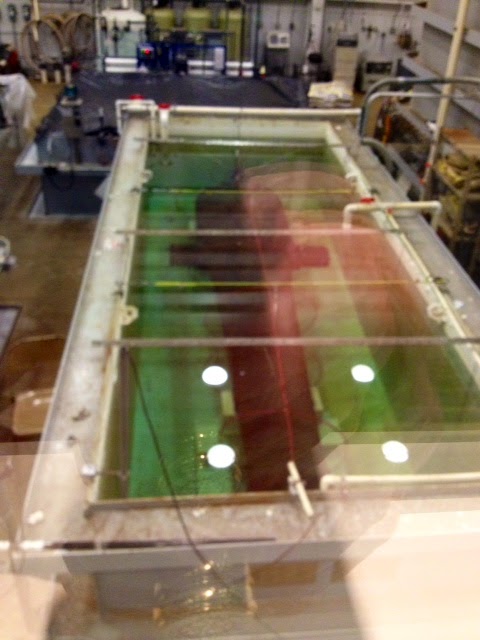 The wires and pipes running across the tank monitor the salinity of the water, continually adjusting it and the current flowing through it. 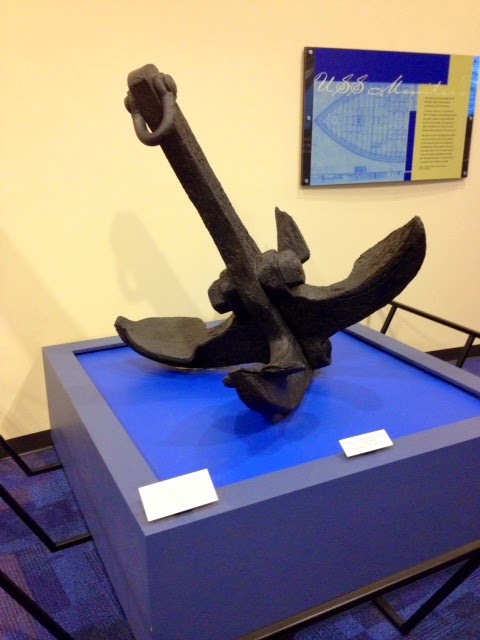 The anchor, of course, is stabilized, but still fragile. It was found some 400 feet from the wreck, as the Monitor, under tow in horrendous weather, had tried to anchor before she sank.

One of the more amazing exhibits in this section is a life-sized mock up of the turret as it was when they brought it to the surface, It is complete with sea-critters, muck, the disarray left from the sinking (and resting upside down), and 2 skeletons buried in the silt. Here's a of pic, which sadly doesn't really do it justice. 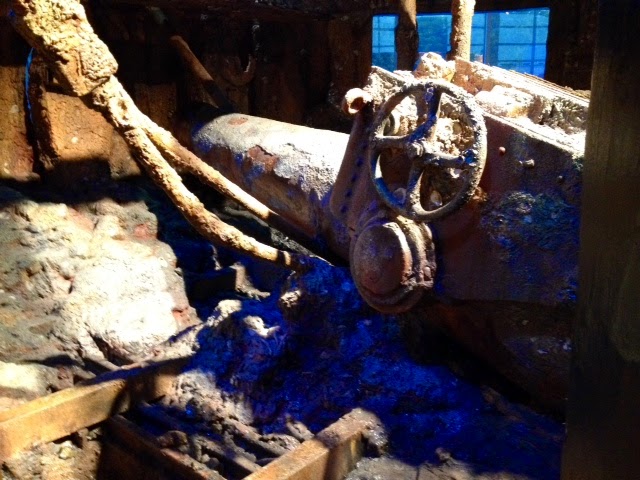 All in all, it was a stirring exhibit - Oh, and they didn't forget about the CSS Virginia (formerly Merrimack). There is also a life-sized mockup of that vessel, shown loading one of her ten guns, which visitors can enter. Here she is: So there you have it, friends. This is a museum not to be missed if you find yourself anywhere nearby. It does not disappoint!

"It takes just one wave to capsize a boat, and one more to take it down." Federico Chini

Posted by Maritime Maunder at 12:49 PM