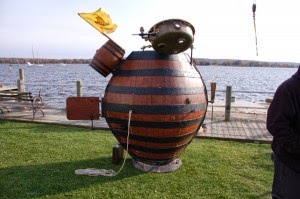 7 September 2014: Today marks the anniversary of the first attack by a submarine – unsuccessful – but it proved the concept was viable.

We are taking a short break from  the War of 1812 here to bring a slightly different slant – from an earlier war – to these pages. I hope you will enjoy the detour!

A man named David Bushnell, a New Englander and undergraduate student at Yale, conceived and designed an underwater vehicle which embodied the 4 basic requirements of such: ability to submerge, ability to maneuver underwater, maintain an adequate air supply for the operator, and able to carry out an offensive attack against an enemy surface ship. TURTLE, a human-powered, barrel-shaped vessel,  was the result, and he planned on using it against the British fleet anchored in Boston Harbor. Unfortunately, the fleet departed for New York before his creation was finished.

It was 7th September 1776 when all the elements finally came together in New York Harbor: a reasonably clear night, calm seas, and the fleet anchored close enough to shore for the operator to get to them. Adm Howe’s flagship was selected and a man named Ezra Lee was chosen to carry out the attack; Bushnell’s constitution was too frail for the strenuous task ahead. Unfortunately, while Lee made it successfully out to the ship, submerged, and prepared to drill into the underwater hull of HMS Eagle, the copper sheathing delayed him sufficiently to run out of air. He surfaced, got fresh air into his craft, and tried again. Still the copper prevented him from drilling into the hull to attach his “time bomb” and he aborted the attempt. En route back to the battery, he jettisoned the bomb which detonated shortly thereafter on the bottom of the Hudson River, doing no damage to anything.

Construction plan of TURTLE
While the submersible was never used again, it did prove the concept was viable. Turtle was being transported to another site in October when the sloop carrying it was attacked and sunk. Though the craft was salvaged, it seems to have disappeared for all time.

“Noah was a brave man to sail in a wooden boat with two termites!” -  unknown
Fair Winds,