2 September 2014: First of all, let me apologize for being slothful yesterday; I took the day off. Hope nobody was too disappointed by my lack of clever repartee! Nonetheless, here I am with a new and hopefully educational and entertaining commentary!

The header poses the question: are boats and ships properly called a “she?“  There are a host of reasons why this tradition has been extant for hundreds – thousands, even – of years. But before we get into the explanation for this tradition, let me hasten to point out, especially in this age of overbearing and over done “political correctness,” that there in NOTHING misogynistic involved nor is it “sexist” or in any way demeaning to the fairer among us!

English is one of the only languages in which inanimate objects done not carry a gender identifier. All the Romance languages and, I believe, most of the other popular languages of the world do. “La, le, el” and etc. However, linguists who study history have suggested the English used to have these gender identifiers, but they, like so many other things, fell by the wayside over the years. So, since our mother tongue has its roots in the languages that predate it, it would seem logical to accept this premise. And in every language (possibly except Russian and its derivatives) boats and ships are “LA” denoting them as female.

Yesterday, while sitting on my boat (and not writing my blog!) a couple came by wanting to see my pride and joy, a request I was only too happy to fulfill. Here she is (note gender!) 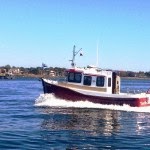 In any case, they came aboard, were suitably impressed, and the lady kind of smirked when I referred to the boat as “she,” suggesting kind of “oh isn’t that cute.” I offered that ALL boats are “SHE” and went on to give an explanation of why (different from above!)

Boats are female because: 1. Like their human counterparts, they carry a cargo safely and protect it until delivery, 2. it takes lots of paint and bunting to keep them happy and looking their best, 3. they never show their bottom in public, 4. (this goes back to the old days – no angry emails, please) it take a strong man to control one, and finally, 5. it’s not always the initial investment that is high, but the upkeep and maintenance is!

My visitor accepted the explanation and agreed it was most likely correct! I later remembered that in the olden days, boats/ships were most often owned by men who, experiencing long absences from their loving wives, named the boat/ship after them to “keep them closer to their hearts” when away.
So that’s it, folks. And while my little boat is not named for a female person, she is most definitely female in her disposition!

“There is nothing -absolutely nothing – half so much worth doing as messing about in boats!”
The Wind in the Willows, Kenneth Grahame

Email ThisBlogThis!Share to TwitterShare to FacebookShare to Pinterest
Labels: tradition