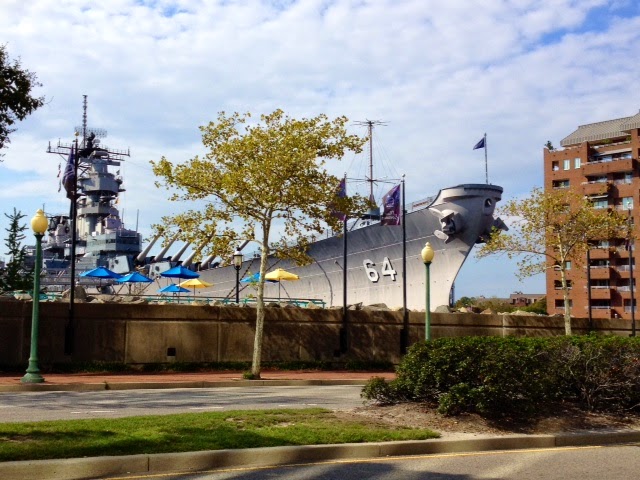 22 September 2014: Back from Norfolk (what a change in 46 years when I lived there! Wow!) and the Maritime Heritage Conference organized this year by the National Maritime Alliance. The conference is held every four years (this one was the 10th) in a seaport town/city. We were within a short wallk of the Nauticus complex which houses a brilliant museum, science center, and is home to the Hampton Roads Naval Musuem. It is also home to the retired battleship USS Wisconsin BB 64. The opening reception was held on her foredeck (fo'c'sle) - a truly awe inspiring vessel. Well over 100 people stood, chatted, listened to music, ate, drank, and enjoyed the evening and it was not a bit crowded! Her 16" guns in the forward turret overlooked the festivities - note the musicians sitting below the barrels! 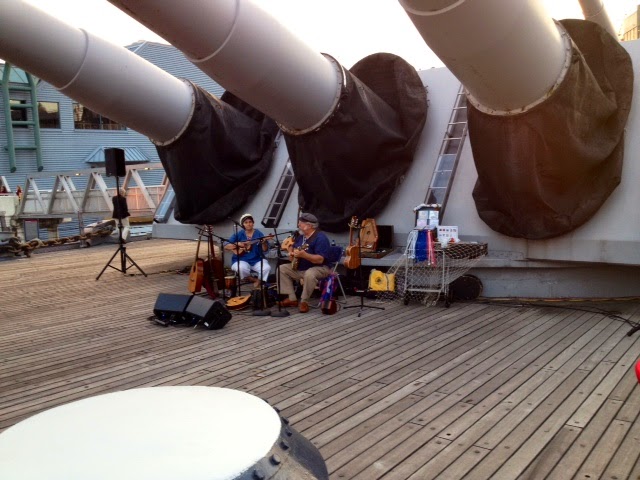 Those are some guns! They can fire a projectile weighing as much as a Volkswagon over 20 miles, and believe me, the "bullet" makes a really big hole! 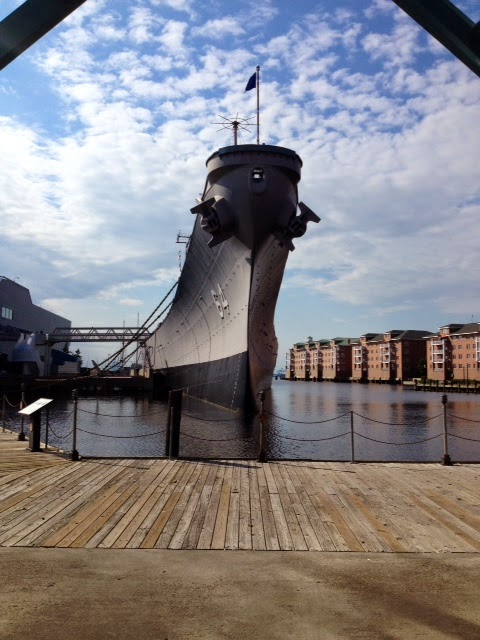 The next day was the first day of panel discussions, seminars, and lectures. Obviously, I could not attend all of them, but tried to pick ones that would be of interest and interface with what I do. I also selected ones with interesting speakers. Some of them introduced new faces (for me) in the biz and some new interesting research. Naturally there were many on the War of 1812 - this is the final year of celebration of the bicentennial, after all - and I was pleased to hear some new thoughts and some new research presented. One talk of particular note was on the "forgotten" Battle of Essex (CT) and was the result of some serious "hands on" research and investigation and actually resulted in the government adding Essex to the National Battlefield Protection Act! An unheard of success! The research resulted in a book which I can recommend: The British Raid on Essex by Jerry Roberts. Very well done and interesting. Jerry, by the way, is a great storyteller!

A couple of other sessions the first day were notable - there was one excellent one on the writing of The Star Spangled Banner which was well attended and likely the highlight of the day . . .  Just kidding - that was my lecture and it went well and I think people actually might have learned something from it! Those of you who stayed current on my blog in the weeks running up to the conference got an early look at it since those posts were mostly taken from the text of the talk.

So that's it for today; I will give you some info on the other days and the trip to the Newport News Mariners' Museum (wonderful!) tomorrow.


"A toast: To my country; right or wrong, my country!" Commodore Stephen Decatur

Posted by Maritime Maunder at 4:13 PM