29 August 2021: This is a sad video post we're doing this week; as a former destoryerman (Tincan sailor), I hate to see one of our own get used for target practice. In fact, one of the 3 destroyers on which I served was used for target practice after she was decommissioned, but not by other destroyers (I personally would have given alot to be able to shoot at a "live" target without having to be concerned with receiving incoming shots!) but by amphibs (LSTs LPHs and the like which rarely fire their own guns). It was sad to see, as are this video and still shots. But they are quite spectacular to those who have never seen the results of serious naval gunfire. So, from the on line mag, The Warzone:

The U.S. Navy has released a video montage from a recent Sinking Exercise, or SINKEX, off the coast of Hawaii. The footage includes clips showing the Navy, together with the Marine Corps, pummelling the ex-USS Ingraham, the last Oliver Hazard Perry class frigate ever built, with a variety of weapons, before a Mk 48 torpedo fired from the Los Angeles class nuclear attack submarine USS Chicago finally breaks the ship in two. 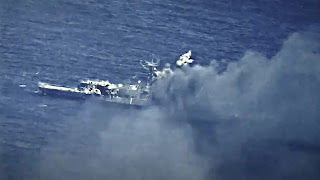 The SINKEX was one part of the unprecedently huge Large Scale Exercise (LSE) 2021, which began on Aug. 2 and ended on Aug. 16. LSE 2021 was centered, in large part, on helping the Navy and Marines explore and refine various new expeditionary and distributed concepts of operations. The SINKEX portion was focused on demonstrating various long-range maritime strike capabilities that both services have now or are in the process of fielding. The first half or so of the video, seen in full above, starts with a series of clips showing various weapon systems employed in the SINKEX. In order of appearance, they are Navy P-8A Poseidon maritime patrol planes and Marine F/A-18C/D Hornet fighter jets armed with AGM-84D Harpoon anti-ship missiles, a UGM-84D submarine-launched Harpoon onboard USS Chicago, the ground-based Navy-Marine Expeditionary Ship Interdiction System (NMESIS) unmanned launch system for the stealthy Naval Strike Missile (NSM) cruise missile, and Navy F/A-18E/F Super Hornets armed with AGM-154 Joint Stand-Off Weapon (JSOW) precision-guided glide bombs. 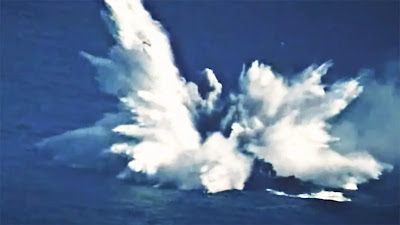 As already noted, USS Chicago, which also happens to be the Navy's oldest Los Angeles class submarine presently in service, after the decommissioning of USS Olympia in February, also fired a Mk 48 torpedo during the SINKEX. Navy F-35C Joint Strike Fighters dropped Paveway-series laser-guided bombs, as well. The F-35Cs flew from the deck of the aircraft carrier USS Carl Vinson, which is the first to carry those stealthy jets on an operational cruise.

The second portion of the video shows various weapons being fired at the ex-USS Ingraham, which was decommissioned in 2015 and was subsequently set aside to be used as a target, and then hitting the ship. The strike footage includes a clip where a smaller weapon, possibly a JSOW or Paveway, appears to strike the center of the ship, followed by a missile, which would be either a Harpoon or an NSM, hitting the stern.

This is followed by a view of the Mk 48 torpedo striking the side of the former Oliver Hazard Perry class frigate, causing the center of the ship's hull to buckle and likely break.  The Navy's new video ends with the sunken ship's bow seen still poking straight up above the waves.

Overall, it's an impressive display of maritime firepower and demonstrated various maritime strike capabilities that the Navy and Marine Corps see as essential components of their new concepts of operations. In the end, though, it also highlighted how torpedoes, such as the Mk 48, are still king when it comes to sinking warships.

On yet another personal note, I did have the opportunity to ride and observe on a US attack submarine during an exercise in the Pacific with a view toward learning how to combat their obvious advantage. It proved that there is little a surface ship can do to beat a determined sub skipper. The stealth, technology, and speed give them a huge advantage.

So, on that uplifting (to all you surface warfare officers out there) note, we'll sign off until next week. Stay safe.

Posted by Maritime Maunder at 11:39 AM