1 August 2021: Stop the world! Or at least slow it down some! My goodness; it's August already! How time flies! Before we know it will be Autumn and then Winter. Wow!

This past weekend we had the pleasure of visiting Penn's Landing Pennsylvania (Philadelphia) to attend a conference of maritime folks at the Independence Seaport Museum. The weather was perfect, the people wonderful, and the experience super. We visited and toured the battleship USS New Jersey (moored across the Delaware River in Camden, New Jersey) as well as the 19th century cruiser USS Olympia, famed for carrying the Unknown Soldier home for burial after the First World War. She also fired about 300 rounds form her 8" guns at the battle of Manila Bay during the Spanish American War.

The Museum at Independence Seaport was special, having some amazing exhibits as well as other floating vessels beyond those mentioned above.

Following are some images of the seaport, New Jersey, and Olympia. 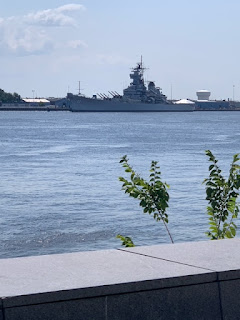 USS New Jersey from the Philadelphia side. She is over 800' long and over 100' in breadth. Her 16" battery was modified during her involvement in the Middle East conflict, allowing space for missiles and a helicopter landing pad on the fantail. She fought in four different conflicts: WWII, Korea, Viet Nam, and Middle East war with Iraq. She could steam at 35 kts (about 39 MPH). 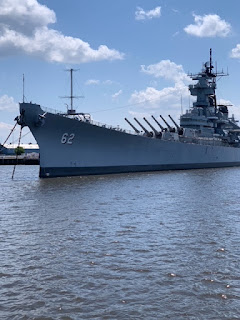 The bow is truly impressive, but during the Pacific War (WWII) she was taking waves over the bow all the way to the bridge! 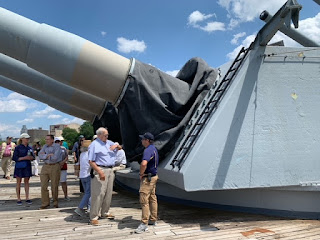 a 16" gun turret - the people help with the scale. These guns are huge! 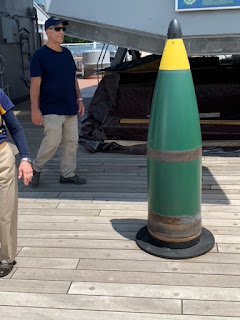 and fire really big bullets (projectiles) that weigh 2200 pounds and are pushed out the barrel with 300 pounds of black powder. The can shoot 20+ miles! 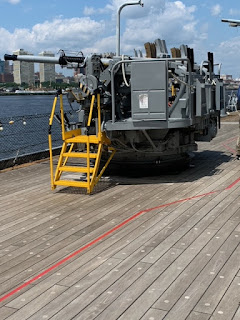 While battleships always had escort destroyers to protect them from attacks from the air or under the sea, they also carried their own antiaircraft guns to take care of immanent threats that might have slipped through the destroyer envelope. 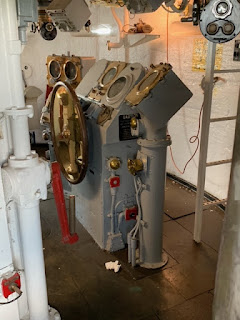 And of course, the command bridge was heavily armored to protect the helmsman and other crew members who drove the ship. The captain and officer of the deck generally stood outside forward of the wheelhouse or above it where the view was impressive to say the least! If you look closely at the images below, you can see how far away the bow is! 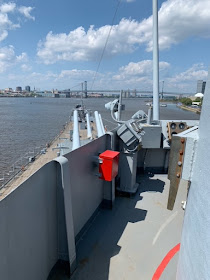 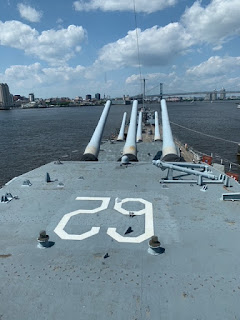 For comparison purposes, here is what a battle cruiser looked like just 50 years before USS New Jersey was built!

That's gonna do it for this one, folks. Perhaps next week we can talk a bit about Olympia and her role in history.

Posted by Maritime Maunder at 11:40 AM