14 August 2021: With all that's going on in the world - most not so good - we will lay off the politics and editorial rhetoric to bring you a pretty neat concept - well, it's not just a concept - that the U.S. Naval Institute wrote about recently.

The Navy could use one of the world’s oldest technologies to defeat one of the newest by launching autonomous sailing drones to find and track enemy submarines. And map ocean floors.

Saildrone is marketing its unmanned — the company calls its vessels “uncrewed” — surface vessels, outfitted with a composite rigid wing sail, as a persistent reconnaissance platform capable of carrying sophisticated sonar equipment. The drones, which power their keel-mounted payloads with solar energy, can stay at sea for extended periods to perform an array of missions, according to Brian Connon, Saildrone’s vice president of ocean mapping. 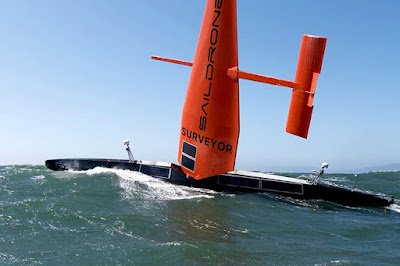 “We use the wind to sail these around, primarily collecting ocean data, atmospheric and oceanographic observations, but we can also put a payload in the keel and do things like fisheries surveys or single-beam mapping,” Connon told USNI News at the Navy League’s annual Sea-Air-Space 2021 symposium at National Harbor, Maryland, where Saildrone was on display for the first time.

“From a defense perspective, we’re using these to look for seamounts that might be a hazard to submarine navigation,” he said. “It’s a very low-cost way to go out in an area where someone thought they might have seen something; we can go out and say whether it’s there and to stay away or it’s deep enough that a submarine can pass through safely.”

Any of the Saildrone models could carry passive acoustic sensors and transmit signals to a manned surface vessel, Connon said. Larger versions can tow a sonar array or other underwater sensor to hunt for enemy subs. It also can search the near-surface or surface of the water with hydrophone sensors or cameras to perform counter-drug missions, he said.

The company, headquartered in Alameda, Calif., has built 100 of the 23-foot Explorer drones. . Thirty of the vessels are actively plying the waves from the Arctic to the tropical Pacific Ocean, mapping the seafloor, measuring schools of fish, monitoring shark mating behavior and conducting other data-gathering missions, Connon said.

The all-electric uncrewed sailing vessel sports solar panels on its sail and deck that charge its batteries and power payloads. A small propeller is used primarily as an auxiliary power generator that spins as the boat sails, Connon said. Explorer has an endurance of up to a year at sea.

A remote operator defines a corridor inside which the drone can sail and plots waypoints. The onboard computers do the rest, including optimizing the point of sail and controlling its orientation to the waves.

“Generally, it’s a pre-set plan that they run and if they deviate then we will know,” he said.

The Coast Guard has already tested the feasibility of deploying the autonomous sailboats for persistent maritime domain awareness in remote areas of the ocean.

In 2020, six of the 23-foot versions of the Saildrone sailed from Hawaii for a month-long demonstration of their endurance. Several weeklong tests presented operational scenarios including general surface traffic monitoring; detecting illegal, unregulated, and unreported (IUU) fishing; search and patrol; and port security. The fleet of drones successfully provided Coast Guard units with information during the tests without incident.

With the success of Explorer, Saildrone decided to “take the next step and ask what else can we do with these,” Connon said. That brainstorming resulted in the 72-foot Surveyor, which has a 50-foot mast, an auxiliary diesel engine and “the same capability as a survey ship for ocean mapping,” he said.

Surveyor has a keel-mounted sonar that can reach down to 7,000 meters and a shallow-water multibeam echosounder that can collect very high resolution maps of littorals. The engine is required to augment solar to run the power-hungry sonar gear, Connon said. The engine can also be used for propulsion in calm winds but is primarily used to charge the onboard batteries.

Surveyor sailed from San Francisco to Hawaii in July and mapped the entire 28-day transit over previously uncharted ocean.

“Only 20 percent of our oceans are mapped,” Connon said. “We need a lot more of these vehicles that can go out and map those parts of the ocean that, I don’t want to say people don’t care about, but are not a priority.”

Saildrone recently launched a 33-foot prototype called Voyager that can do both shallow water bathymetry and maritime domain awareness. Like its larger cousin, Voyager will carry radar, an automatic identification system (AIS) transceiver and high resolution 360-degree cameras. Connon said the company in the past five years has captured 100 million images of the surface of the ocean and things floating on it. During a previous RIMPAC exercise, the drones were able to capture images, identify vessels and transmit that data via satellite, Connon said.

The idea is “being able to have another asset with eyes on the water to patrol certain areas, so that the ships can go do what the ships do better,” he said. “Same thing with ocean mapping … we’re not trying to replace the ships. Those ships are very expensive and to have them just slowly go back and forth, like mowing your lawn, to map the ocean, that’s a really expensive way to do that when we can do it this way.”

Pretty neat. No watches to stand, no crew to worry about and performs a possibly vital and dangerous mission. And proven workable; during WWII, the US Navy used "commandeered" private sailing vessels (manned, of course) for finding enemy submarines near our coast.

And by the way: this post completes seven (7) years of Maritime Maunder. Next week, we begin our 8th year! We have put up 447 posts and have  over 125,800 readers world wide! Thank you all so much for being loyal readers!

Posted by Maritime Maunder at 12:54 PM