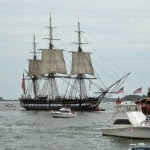 23 AUGUST 2014: What a week! Lots of significant historical anniversaries and a new adventure in blogging for this Old Salt!

On the 19th, we noted the anniversary of USS CONSTITUTION’S 1812 signature victory over HMS GUERIERRE in which she won the sobriquet “OLD IRONSIDES” (interestingly, our Ship of State was not the first to carry this nickname – a British ship also was called Ironsides in the 18th Century!). On the 22nd, we observed the first winning – and the genesis, if you will – of the AMERICA’S CUP with the 1851 win by the schooner of the same name over 14 British vessels in the Solent, and, while we didn’t mention it, the 22nd also marked the anniversary of Hurricane Andrew which, in 1992, devastated the Bahamas and then, on the 24th took out much of South Florida. And let’s not forget that Hawaii joined the Union on the 22nd back in 1959.

Taking a little peek ahead, tomorrow (the 24th) marks the 200th anniversary of the “BLADENSBURG RACES” as the Battle of Bladensburg was called at the time and then, the next day, the 25th, a sad day for the United States, when British forces burned our capital (1814). We’ll go into some detail on those on the appropriate days! A busy week with lots more to come! Have a great weekend!

“The pessimist complains about the wind; the optimist expects it to change, and the realist adjusts his sails!” William A. Ward