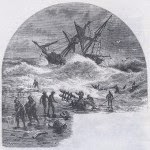 30 AUGUST 2014: Yesterday we brought you information about hurricanes, their formation, courses, and devastation. As a follow on to that posting, today’s topic is shipwrecks. It was serendipitous that today a friend stopped by my boat and said he had something to show me. I went to his vessel and sat down in his saloon and he brought out a book entitled, “Shipwrecks of the Outer Banks” by Kevin Duffus. (Looking Glass Productions Raleigh NC 2007) he had just completed the trip north from Florida and had purchased the book inside Hatteras. It was fascinating!

There are over 600 documented wrecks along the coast of North Carolina, some explored, most not. The area around Cape Hatteras has long been called the “Graveyard of the Atlantic” for good reason: the shifting sands offshore, the proximity of the Gulf Stream, and the frequent storms (there is a “mini-hurricane or Nor’easter in EVERY month of the year there!), as well as an often heavy fog created by the warm water of the Gulf Steam meeting the cooler air – especially in winter – of the Atlantic and the shoreline. I have had occasion to round Hatteras in February in a blinding snow storm and can attest from personal experience that it is a not-to-be-forgotten experience! The prevailing winds in the summer are southwest and in the winter, northeast. Those summetime “breezes” frequently required the captains of sailing ships to tack off and on the coast waiting for a shift so they might continue south and weather the Cape. In the winter, of course, the ferocity of the storms those nor’easters generated with their huge waves and frigid temperatures often sapped the determination of many a sailor of continue their voyage and, once they turned about, they ofter were at the mercy of the seas. And just to add some “frosting on the cake,” magnetic disturbances caused variations in compass readings of up to eleven degrees!

So to what are the wrecks attributed? Poor decisions by masters who chose to beach their foundering vessel rather than sink in deep water was common. Misjudging the current in an inlet which could put them ashore, or parting an anchor cable while awaiting a more favorable wind was another. Rigging failures, mechanical failures, and the ever-popular “just an unseaworthy vessel” accounted for many more.

Shipwreck sites on the Eastern seaboard

If you click on this map, you will see the amazing number of wrecks that dot the coast line of our country! Clearly, “the GRAVEYARD OF THE ATLANTIC”

“Being hove to in a long gale is the most boring way of being terrified I know!” Don Hamilton