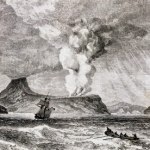 In late May, 1883, a small, uninhabited island in the Sunda Strait (Indonesia) began sending up signs that something was percolating inside. The volcano had been silent for over 200 years and people, ever titillated by the potential for disaster, became excited that something would happen! A German warship passing by noticed that a cloud of ash, some 7 miles high, was hanging over the mountain. The inhabitants of nearby islands kept watch, ever hopeful of witnessing the “real” eruption!

On August 26 and 27th, things went quickly from entertaining to horrific; the mountain began to explode - literally. The first huge blast took off the entire northern side of the mountain and, as it blew, rivers of molten gas, ash, and rock flowed into the Java Sea. Of course, this generated several tsunamis which swept over the nearby coastlines and the good folks who stood in horror watching the spectacle. The next day, 27th August, the rest of the mountain exploded with cataclysmic results. A dust cloud rose 50 miles into the sky and the fine dust from the eruption drifted around the entire planet, cooling temperatures and creating amazing sunsets! The blast could be heard from 3,000 miles away and the 120 foot high wave (tsunami) it generated swept huge numbers of people to their deaths. The mountain threw up five cubic miles of dirt into the sky! 31,000 people died from the tsunami, while another 4,500 perished, burned to death by the lava flows that stretched 40 miles from the volcano. And the island itself was gone! 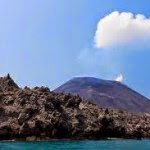 
But the volcano was not; it still lurked, rebuilding itself beneath the sea! I had occasion to pass by there some years ago and actually got ashore on the new island rising from the sea. It was hot underfoot – too the point of actually burning through the soles of one’s boots. And at night, the new peak glowed ominously orange. It is only a matter of time before this still-active volcano gives us a repeat performance!