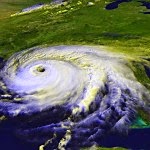 29 August 2014: It is now the peak of the 2014 hurricane season and on this, the 9th anniversary of Hurricane Katrina devastating arrival in New Orleans, it would seem appropriate to offer a bit of information on these destructive storms, awesome in their power, frightening to witness first hand, and destructive as only Mother Nature can be!

These storms are born over warm water, 80+ degrees usually,and get their strength from the warm water colliding with cooler air. The peak season for these killer storms (though not all are killers) is mid-August to late October and the path that Atlantic storms usually take generally follows the eastern seaboard north or cuts across the Caribbean into the Gulf of Mexico. The maturation process of the storm is as follows: it begins life as a tropical depression, grows into a tropical storm, and ultimately, a hurricane. Once it attains this status, it will be gauged by the Saffir-Simpson Scale of 1 to 5 in strength, with category 1 for winds of 74 mph. Category 5 is the tag put on hurricanes with winds over 145 mph, not something anyone wants to experience! These storms are called hurricanes in the Atlantic, cyclones in the Indian Ocean, and typhoons in the Pacific, but they are all the same thing. If you get caught at sea in one, it is said the left side, northwest quadrant in the Atlantic, is the “dangerous semi-circle” while the right (eastern) side is called the “safe semi-circle.” These distinctions arise from the rotation of the storm (counterclockwise) so that if a vessel is on the left side, they will be pushed further into the storm while one of the right side will be ultimately spit out.

Some of the more notorious hurricanes in the Atlantic have been:
the 1938 “New England” hurricane which was a phenomenon because of its 60-70 mph forward speed. There was, of course, no warning and when it crossed eastern Long Island and slammed into the coast of New England, it took over 600 lives. It was a category 3 storm. (the naming of storms had yet to be implemented at that time)
1954 Hurricanes Carol and Edna, followed by hurricane Hazel, a vicious “hat trick” of storms!
1960 Hurricane Donna 1992 Hurricane Andrew (which devastated south Florida and the Bahamas)
1998 Hurricane Mitch which killed hundreds in Central America
2004 Hurricane Ivan (Cat 5 over Grand Cayman for 14 hours!) and of course,
2005, Hurricane Katrina which caused so much devastation in New Orleans.

We hope for a light season of “named” storms this year!