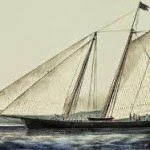 On August 22, 1851, the United States built and sailed schooner “America” beat the best of England in a race ’round the Isle of Wight. Built in New York City by 5 members of the New York Yacht Club and designed by George Steers, the 100′ schooner represented a radical change in conventional design and construction. With Captain William Brown at the helm and a crew of 12, she sailed to Europe, beating everything she encountered en route. They outfitted and repainted the ship in France and then sailed to Cowes, the home of the Royal Yacht Squadron, on the Isle of Wight where the intended to challenge the best that England could offer. No takers! Finally, on 22 August, “America” joined 14 British sailing vessels in a race around the island and thoroughly thumped them all. She finished 22 minutes ahead of the English cutter “Aurora” and an hour before the 3rd place ship, the schooner “Bacchante.” When the American ship appeared, Queen Victoria, watching from the Royal Yacht, is said to have asked, “What is second?” An aide responded, “There is no second, your Majesty!” And so it has been. The prize was the so-called “100 Guinea Cup.” It was renamed the America’s Cup and was donated as a trophy to the New York Yacht Club to be raced for in perpetuity. The NYYC held it until 1983 when “Australia II” eclipsed  the American defender, “Liberty” off Newport RI.


The schooner lived a checkered life thereafter doing service as a Confederate raider, U.S. blockade ship, and training ship. In private ownership, she fell into disrepair and has been broken up.

“Live in the sunshine, swim in the sea, and drink in the wild air!” Ralph Waldo Emerson