9 December 2019: Things are getting a bit hectic now as the holiday season looms so we may not make our weekly schedule. That said, we will try to bring you something new about every week.....
With the release of the film MIDWAY not quite a month ago (it was brilliantly done, by the way, and highly recommended), we thought the recent discovery by the late Paul Allen's Research Vessel Petrel would be an appropriate topic for this week's offering..... From LIVESCIENCE writer Nicoletta Lanese:
~~~~~~~~~~~~~~~


Long-Lost WWII Ship Found at the Bottom of the Pacific Ocean
Only one other ship sunk at the Battle of Midway has been found, to date.
After weeks spent surveying an area of ocean about the size of Houston, historians aboard the research vessel Petrel spotted the wreckage of a World War II ship on the floor of the Pacific.
The Japanese vessel, a flagship carrier called Kaga, sank on June 4, 1942, during the Battle of Midway, a U.S. victory and major turning point in the war, the Associated Press reported. 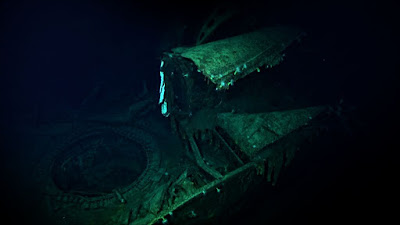 "You see the damage these things took, and it's humbling to watch some of the video of these vessels, because they're war graves," historian Frank Thompson told the Associated Press. Thompson, a historian with the Naval History and Heritage Command in Washington, D.C., was onboard the Petrel when the crew discovered the sunken ship. The Kaga sank after taking fire from 30 dive bombers and two torpedoes from an American submarine, the USS Nautilus. Researchers found it more than 17,000 feet (5,400 meters) beneath the ocean surface, according to a video released by the Petrel crew.

The Kaga joins a list of 30 other warships uncovered by the research vessel Petrel, a 250-foot-long (76 meters) vessel whose crew has been tasked with locating historically significant shipwrecks and exploring underwater ecosystems, according to the R/V Petrel website. Funded by the estate of late Microsoft co-founder Paul Allen, the crew collaborates with the U.S. Navy and international authorities to explore underwater military gravesites and help solve lingering mysteries about WWII battles. Click the link below for information and comments from an American pilot who took part in the attack on Kaga:

video of wreck and pilot description of attack

The Battle of Midway stands out as a decisive confrontation between Japanese and U.S. forces in the Pacific, but many artifacts from the clash have yet to be recovered, according to the AP.
"This mission is unique because we're surveying an entire battlefield," Rob Kraft, director of undersea operations for Vulcan Inc., the company that operates the Petrel, told the AP in a video interview. "This is one of the largest battles of World War II. … The information we have is limited, but the battlefield itself was extremely large."
The Battle of Midway took place between warships and aircraft near Midway Atoll, a group of islands about 1,300 miles (2,090 kilometers) northwest of Honolulu. Japanese forces intended to launch an attack in secret, but U.S. cryptographers decoded covert Japanese correspondence leading up to the attack, according to The National WWII Museum.
Raging for several days, the battle took more than 3,000 Japanese and 360 U.S. lives. The Japanese lost four aircraft carriers, the Akagi, Soryu, Hiryu and Kaga; one cruiser, the Mikuma; and several hundred aircraft. The U.S. lost one carrier, the USS Yorktown; one destroyer, the USS Hammann; and 144 aircraft. Before the Kaga discovery, the only other sunken ship that researchers had found was the Yorktown, the AP reported.
The Petrel crew found the Kaga wreck within the Papahānaumokuākea Marine National Monument, an area of more than 580,000 square miles (1.5 million square kilometers) of the Pacific Ocean, according to the monument website. The vessel launched its two onboard robots, an autonomous underwater vehicle and a remotely operated vehicle, all charged with investigating and collecting video footage of the scene.
~~~~~~~~~~~~

There you have it, RV PETREL finds another historical ship sunk in the Pacific War. And if you have not yet done so, see the film MIDWAY. You won't regret it!

Posted by Maritime Maunder at 1:30 PM