15 December 2019: This is not strictly maritime but the lighthouse is, naturally, on the coast. So I am hoping you, dear reader, will afford us a bit of leeway on the issue of "maritime."
But first, a couple of interesting (to us) notes about our readers: Interestingly, the largest block of readers last week were in Ukraine! And no, they have offered us no money., board positions, or any incentive - nor have we offered them any, nor have we threatened to hold back aid. We appreciate any and all readers with an interest in maritime ... stuff, and welcome any who wish to follow us.
And further to that, we were secretly hoping to hit a benchmark of 100,000 readers by year end. We are, as of today, about 730 short of that number with two weeks remaining in the year so ... holding our breath, we are hopeful of making the number! Personally, I am stunned, gratified, and somewhat perplexed at the number who read us - after only five years four months.... Thank you all for your continuing interest in Maritime Maunder. And now, today's post, albeit somewhat shorter than usual. From Associated Press:
~~~~~~~~~~~~~~~~~~~

A 120-year-old lighthouse was put on wheels and rails and moved back from the eroding North Sea coastline in northwestern Denmark on Tuesday.
The now-defunct Rubjerg Knude lighthouse was moved 70 meters (300 feet) inland, said Kjeld Pedersen, the mason in charge of the move, which took less than the expected 10 hours. Concrete will now be poured around the base of the roughly 1,000-ton structure. 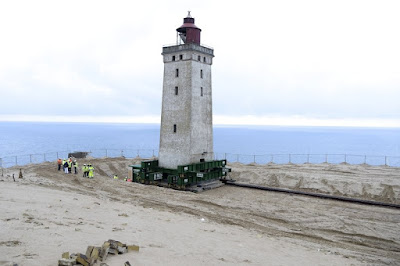 When it first went into service in 1900, it was roughly 200 meters (656 feet) from the shore. But steady erosion meant that, by the time the move started on Tuesday morning, it was only about 6 meters (19 ½ feet) away.

Denmark’s environment ministry spent 5 million kroner ($747,000) to save the building, which officials say would otherwise have to have been dismantled. Environment Minister Lea Wermelin has called the white, square lighthouse “a national treasure.”

Local mayor Arne Boelt and the town of Hjoerring also chipped in to foot the bill.
The lighthouse ceased operating in 1968 and was briefly turned into a museum, including an exhibit about the structure’s struggle against sand drift.
In the end, it was closed because of shifting sands which slowly buried the two buildings adjacent to the lighthouse. The lighthouse, however, still gets more than 250,000 visitors each year.

The move was broadcast live on major Danish news outlets.

In 2008, a nearby church was dismantled to prevent it from falling into the sea. The Romanesque Maarup Church, built on a cliff around 1250, was picked for scenes in “Babette’s Feast,” which in 1987 became the first Danish film to win the Oscar for best foreign language film.

Again, our thanks for your continued support and interest. Until next time,
Fair Winds,
Old Salt
Posted by Maritime Maunder at 2:04 PM