1 December 2019: We here at Maritime Maunder hope that those readers who celebrate Thanksgiving had a very pleasant and controversy-free day with family and friends. We did and thank our family for providing a wonderful repast and gathering.
Today's offering is, to us, astounding: the University of Maine has produced in one piece a 3-D printed boat. And not just a little toy or a model; it's a substantial vessel capable of holding 8 or 9 people and weighs some 5,000 pounds! This came from SOUNDINGS Magazine just today:
~~~~~~~~~~~~~~~~~~

It only took 72 hours, the world’s largest 3D printer, and about 5,000 pounds of polymer and carbon fibers to produce 3Dirigo—a 25-foot center console boat that is now on the books as the largest boat ever to be produced using 3D printing technology.

The printer, manufactured by Ingersoll Machine Tools and developed with engineers at UMaine and the Maine Technology Institute with generous government grant support, can print objects 100 feet long, 20 feet wide, and 10 feet tall. But the printer is not just for boats. UMaine sees possibilities in industrial applications such as bridge supports, beams and other structural objects.
Since June, Habib Dagher and his team had watched their custom 3D printer being put together. Before that, it had taken them three years to find a company that could even build the kind of 3D printer they wanted, incorporating their patent-pending technology. And before that, it had taken them about 15 years’ worth of science to develop the materials the printer would use to create things once they turned it on. On a Thursday night this past fall, that moment finally arrived.
“We asked the team, what should be the first thing we print with this?” says Dagher, who is executive director of the UMaine Advanced Structures and Composites Center at the University of Maine. “We had the option of printing something small and meager, but we wanted to see where the glass ceiling was.” 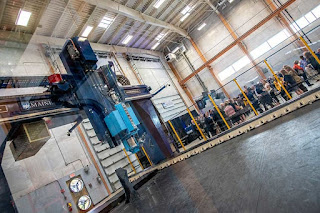 Just 72 hours later, at 10:15 p.m. that Sunday night, they had created what Guinness World Records certified in October as the world’s largest 3D-printed boat and largest solid 3D-printed object, using the world’s largest prototype polymer 3D printer. “It was an exciting moment,” he says. “When we got it done, it was 5,000 pounds, printed all in one piece.” 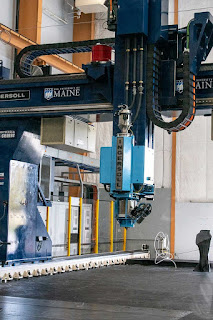 The boat, called 3Dirigo, stands as a harbinger of how boatbuilding itself may evolve in the coming years. It is 25 feet long and made from bio-based feedstock—which means that instead of incorporating glass fibers, as a builder would to create a fiberglass boat, the 3D printer used biofibers that the center has figured out how to make from renewable resources including corn and trees. 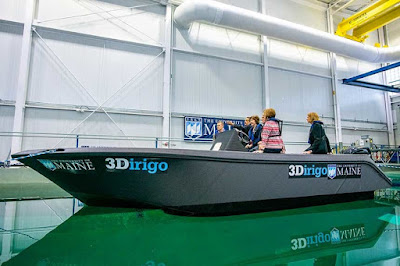 “We break down the wood to a nanofiber structure, and we take that plus microfibers of wood, and we put that into a bio-based, recyclable plastic,” Dagher says. “These nanofibers do two things: They make the plastic stronger and stiffer. They’re about a thousand times smaller than sawdust. They have properties similar to metal, but it’s very challenging to work with them. If you take the fibers and put them in plastics, you can make very strong plastics.” 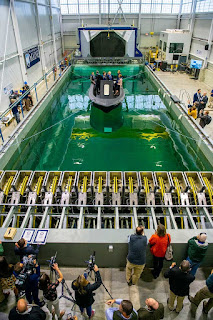 Those plastics can have properties similar to aluminum, but they also are recyclable, which in theory could eliminate the entire problem of what to do with non-recyclable composite boats at the end of their days. “We’re looking at creating things that are 100 percent recyclable,” Dagher says. “Let’s say you use a boat for 50 or 100 years, you can grind it down and turn it into something else.”
~~~~~~~~~~~~~~~~~~

The likelihood is that this - in future years - could revolutionize the boat building industry - not to mention all kinds of other large structural items... like bridges, walls, maybe houses and airplanes.... wow!