5 November 2016: We have written about the Navy's newest destroyer on this site in the past. Now that she is completed, commissioned, and an official unit of the fleet en route to her new home port of San Diego, we thought an update might be worth adding to these pages. The ship is truly a marvel, and this article from the Department of Defense adds some "wow factor" to the story. One interesting point it does not make is that during her sea trials off Maine this past winter and early spring, her radar return was so slight that they had to hang a radar reflector on her mast so the local fishing boats would see her in the prevalent foggy conditions! 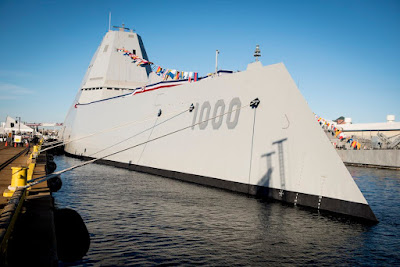 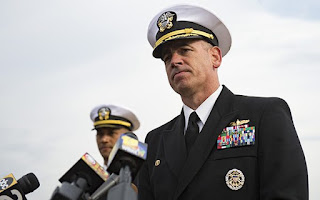 Anyone who knows anything about “Star Trek” just giggled right now.
Yes, the Zumwalt’s captain has the same name as that of the sci-fi show’s illustrious starship, the USS Enterprise. Except the Zumwalt’s captain is James A. Kirk, not James T. Kirk, and he was named after his grandfather – not William Shatner’s character.
“Unfortunately, I came out after the TV show started, so people can accuse my parents of being Trekkies,” Kirk joked. “But they tell me no – it was all about my grandfather."

#7: The ship produces enough power to run a small city.


“I have in excess of 78 megawatts of power that I get to choose what I do with,” said Lt. Cmdr. Nate Chase, the Zumwalt’s chief engineer. He said that’s really what is going to provide opportunity for future weapons and sensor development.
“On an Arleigh Burke [class destroyer], you have nine megawatts of electrical power, and you have dedicated gas-turbine engines for propulsion, but that’s all they’re good for. You can’t harness any of that potential,” Chase said. “On here, with the two main turbine generators and your two auxiliary turbine generators, the commanding officer can decide what his priority is for that power – is it propulsion or a gun system or radar or the sonar system? So, you can reallocate the assets of the power where you need it depending on the mission you’re being dealt.”

#6) Its physical shape is part of what makes it stealth.
The fact that the Zumwalt has a lot fewer things top-side helps make it harder to detect than most ships.
The Zumwalt has 1/50th of the radar cross-section of an Arleigh-Burke-class destroyer, meaning the blip it produces on a radar screen is 50 times smaller. Considering the Zumwalt is 1.5 times bigger than an Arleigh-Burke, that’s pretty substantial. 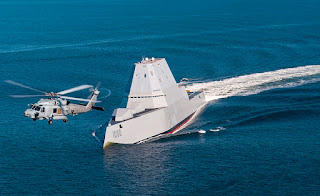 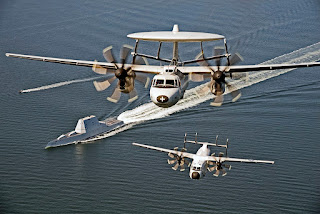 5) It has a much smaller crew than other ships.
While most Navy destroyers have about 300-350 sailors aboard, this one has 147. Chase said the change has been a bit of an adjustment.
“From the most senior leadership to the most junior sailor, working with a smaller crew, working in closer quarters, it’s become a pretty close family,” he said. “It’s hard not to when you’re experiencing everything together.”

4) Fewer crew members equals a lot more automation.
The computer architecture on the ship is very complex and sophisticated, so the crew is interacting with a lot of new technology.
“For example, we have over 35,000 signals that are being taken, processed and displayed on the ship. That’s about five to 10 times other classes of ships,” Kirk said. “There’s a lot less interface with manual valves.”
3) Every sailor on the ship is in a state room.
When you cut the number of crew members in half, what do you get? More space.
“Unlike a ship that has a 40-, 60- or 80-sailor bunk room, every sailor on this ship is in a state room,” Kirk said. “When they wake up, they wake up to only one or two alarm clocks, not four or 50. And then they have their own facilities in that state room to take care and prepare for the day.”
2) It’s a pretty smooth ride.
The Zumwalt has a tumblehome hull, meaning its sides slope inward above the waterline, so it cuts easily through big waves, making for a much smoother ride than other ships. Chase said there’s no listing back and forth, especially in heavy seas.
“This blows the [Arleigh] Burke out of the water,” he said.
“It rides marvelously,” Kirk said of the 15,500-ton destroyer. “I would say it feels like a really souped-up sport utility vehicle. … It’s like a very big SUV that’s made to go very fast.
1) The destroyer is named for Adm. Elmo Zumwalt Jr.
Admiral Elmo Zumwalt Jr. was a wartime legend, having served in World War II and Korea before becoming the commander of all naval forces during the Vietnam War.
“He was a great man who reformed the Navy to make it a more just institution,” Kirk said.
His 37-year career was very impressive.

That'll do it for now; until next time,


Posted by Maritime Maunder at 8:32 AM