MAYFLOWER II BACK TO MYSTIC SHIPYARD

14 November 2016: Last year we posted a piece about Mayflower II being hauled at Mystic Seaport for the start of some major restoration work. She is 60 years young and in need of about $2.5 million in repairs and restoration work. It was known at the time she would not be put on the hard until this year, and indeed, did spend last summer at Plimouth Plantation, having had a few "quickie" remedial repairs done. Here's what she looked like when she qwas "younger." 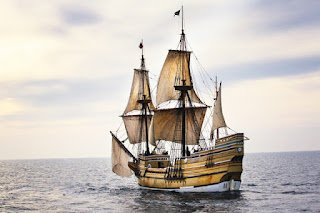 Well, she's now back, and this time, it's the real deal...... she will be out of service for a couple of years. Here's what the folks at Mystic had to say about the project:

Mayflower II, Plimoth Plantation’s 1957 replica of the ship that carried the Pilgrims to Massachusetts in 1620, returned to Mystic Seaport November 2  to continue preservation work at the Museum’s Henry B. duPont Preservation Shipyard.
This is the third phase of a multi-year preservation initiative for the nearly 60-year-old ship. Mystic Seaport shipwrights and Plimoth Plantation maritime artisans are collaborating on the restoration, which is being carried out to prepare the ship for the commemoration of the Pilgrims’ arrival 400 years ago in 2020. Unlike past years, Mayflower II will remain at Mystic Seaport for a period of 30 months and not return to Plymouth in the spring.
The Shipyard’s first task is to begin the process of downrigging and removing more than 50 tons of steel and lead ballast from the hold. Once that is completed, she will be hauled out of the water and moved to a location in the yard where the bulk of the work will take place.
“Our goal is to haul her as soon as possible,” said Quentin Snediker, the director of the Shipyard. “The next month-and-a-half to two months are going to have a pretty intense focus on preparation.”

“We’ve been working on the project for about the last two years,” he adds. “When she first came to us, we evaluated the structure, and since then we’ve been planning the process, acquiring the material, and getting ready to jump into the work that can now begin.”
Mayflower II will be available to view in the Shipyard, but visitors will not be able to go on board for the foreseeable future due to the nature of the work being done to the vessel.

Here's her arrival at the Seaport: 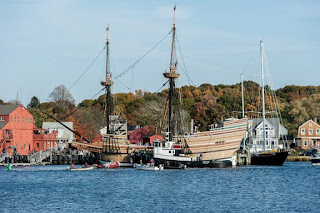 I am sure Mystic will keep us apprised of their progress as the work moves along. We will update our readers as we learn more.