30 October 2016: Ok - so it's not really maritime, but it is timely.... (sorry, couldn't resist that one) and I thought my readers might enjoy an interesting kind of spooky piece I recently came across about the Viet Nam War. Having spent a few years in that theatre myself, I do not doubt the veracity of what this article relates; there was lots of weird and unorthodox stuff going on over there. So, lightly edited, from Military History Now, here it is. 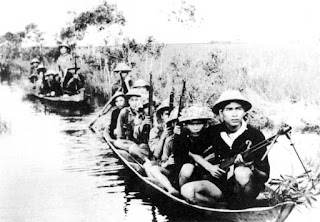 JUST AFTER dusk on the night of Feb. 10, 1970, the jungles near the U.S. Army’s Fire Support Base Chamberlain in Hau Niga Province, South Vietnam came to life with a cacophony of spine chilling sounds. Mournful wailing, sobbing, and baleful shrieks filled the air — unearthly sounds that seemed to be coming from everywhere, but nowhere in particular.
And amid the blood curdling chorus was a clearly audible warning:
“My friends,” pleaded a disembodied voice from across the darkness, “I have come back to let you know that I am dead… I am dead!”
“It’s hell… I’m in hell!” it continued in Vietnamese. “Don’t end up like me. Go home, friends, before it’s too late!”
The eerie warning was followed by a chorus of other strange sounds: banging gongs, sobbing women and a child’s voice calling for her father.
To the Viet Cong soldiers hiding in blackness beyond the American perimeter, these otherworldly sounds sounded like the wandering souls of departed comrades. According to local folklore, the sprits of the dead that were not returned home for proper burial were cursed to walk the earth in torment until their remains were found and properly interred. Vietnamese legends held that on the anniversary of the death of one of these lost souls, a spiritual channel between our world and the afterlife opens making communication possible.
Were these hair-raising sounds just such a phenomenon? Were they spirits of the dead of some past battle reaching out to the living? Perhaps to the communist guerrillas listening it seemed that way.
The reality was something much less fantastic.
Operation Wandering Soul
The noises were actually part of a taped broadcast that was being blasted across the countryside by American GIs armed with portable PA speakers. In fact, the entire program had been recorded weeks earlier in a Saigon sound studio. It was all part of a top secret U.S. military psychological warfare campaign known as Operation Wandering Soul. The voices and noise played in the jungle that night came from a session known unofficially as “Ghost Tape No. 10”.
Organized by the U.S. Army’s 6th PSYOP battalion in cooperation with the U.S. Navy, the Wandering Soul campaign was intended to frighten and demoralize the enemy, and hopefully compel many to desert their positions.
Following the broadcast that night, elements of the 27th Infantry Regiment (nicknamed the “Wolfhounds”) swept the jungles surrounding Fire Support Base Chamberlain in search of trembling VC insurgents. The mission netted three prisoners – a moderate success.
And this was not the only broadcast of the PSYOP horror show.
Various American units employed similar recordings in a number of areas in South Vietnam in late 1969 and early 1970 with mixed results.
On one occasion, the broadcast included an amplified tiger’s growl (which was recorded at the Bangkok zoo). The remix was transmitted over a communist-controlled hilltop in South Vietnam. It supposedly led to 150 VC to abandon their positions.
In other cases, the recordings were played from speakers mounted on helicopters and were supported by leaflet drops. In some cases, enemy soldiers realized it was a hoax and concentrated their fire onto the choppers.
Yet in a number of instances, the tapes were so effective that they reportedly terrified friendly South Vietnamese troops and civilians alike.
One former PSYOP officer recalled that even if the enemy saw through the ruse, the message at least played upon their anxieties about dying far from home and likely sapped their morale.

Hope that inspired your Halloween spirit!

Until next time,
Fair Winds,
Old Salt
Posted by Maritime Maunder at 7:22 AM