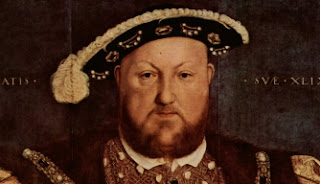 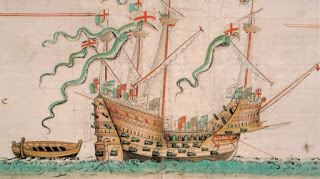 Henry VIII had very little naval power in his arsenal when he assumed the throne in 1509, which left England vulnerable to a waterborne attack from the European continent. The king ordered a military buildup, which included the construction in Portsmouth of the state-of-the-art, carrack-type warship Mary Rose, built with wood harvested from 600 enormous oak trees. Henry VIII’s flagship—which he christened Mary Rose perhaps in honor of his sister, Mary Tudor, but more likely as an homage to the Virgin Mary—became one of the most feared on the open seas.
After surviving three wars with the French, the 34-year-old warship was a grizzled veteran by the time she was sent out in July 1545 to once again fight the enemy at the Battle of the Solent. From his perch Henry VIII watched in horror, however, as his nautical pride and joy suddenly rolled to her starboard side. Seawater gushed through the open gun ports, and in quick order Mary Rose slipped below the cobalt surface of the Solent, the strait separating the Isle of Wight from mainland England, taking more than 400 men with her. Only 35 survived the sinking of the seemingly invincible Mary Rose. Even today the cause of the ship’s demise—whether a mistake by the captain or crew, enemy fire or an ill-timed gust of wind—remains a mystery.
For centuries, Mary Rose rested undisturbed on the seabed until it was rediscovered in 1971. Divers found that the warship’s muddy grave had preserved the wreck and prevented her erosion. In 1982, as 60 million viewers around the world tuned in on television to watch, Mary Rose was brought to the surface for the first time in 437 years. The following year, what remained of the solid oak ship was put on public display in Portsmouth, the city from where the warship had been launched in 1511.
﻿
Posted by Maritime Maunder at 10:45 AM