25 June 2016 File this under the heading, Doubtful! When you see the video at the end, you'll probably agree!

Manned crossings of the Atlantic Ocean are not unheard of and in 2007 the Sun21 team took their solar powered catamaran sailing the seas from Basel to New York in the 7000-mile sea mile journey.  Another successful manned expedition was that of the MS Turanor, the largest solar-powered boat in the world, which completed a 37,286 mile trip around the globe.


So these guys have already shown us that it can be possible to travel by solar powered boat while manned with skilled humans, but what about on its own?  That’s what Isaac Penny and Christopher Sam Soon teamed up to do.  In 2013, they formed their partnership with one common goal in mind – to build an autonomous boat that would be able to sail the world unmanned. 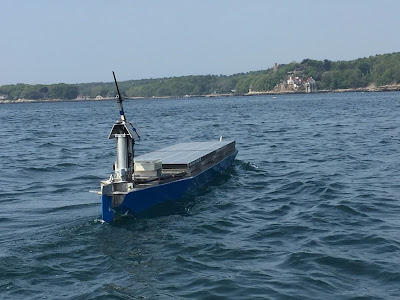 Already departed and hopefully on its way to victory by completing the 3,000-mile journey, the Solar Voyager team are waiting in anticipation to see if it is a success.  Several other companies have tried and have failed miserably, so only time will tell if the Solar Voyager can withstand the power of the mighty seas.
The Solar Voyager is 18 feet long and 2.5 feet wide, with most of the upper surface covered in solar panels.  Underneath the deck batteries are stored to ensure the vessel remains running at night.  Without any humans to operate the ship, GPS is used to navigate through its pre-programmed journey and reports are sent back to the team every 15 minutes so they can monitor its speed, temperature, and other valuable information. 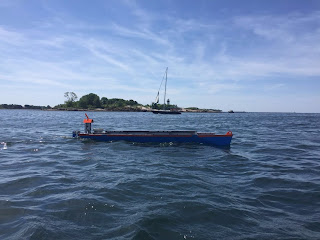 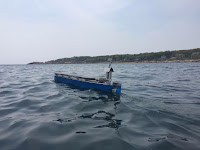 Isaac and Sam both have day jobs and built this project from scratch in their spare time.  They expect the 3,000-mile journey to take around four months and are both planning to fly to Lisbon for the grand finale.  If Solar Voyager does make the shore, then this will be a monumental achievement not just for the team, but also for the world of solar power sailing.
Here's a short video of the boat underway.... see if you don't agree with our assessment that completion of an Atlantic crossing is unlikely!

Whatever the outcome of this experiment, we will tell you about it sometime in the next four months! Stay tuned!


Posted by Maritime Maunder at 7:56 AM