13 June 2016: A few months ago, we posted a piece about the Hawaiian voyaging canoe which was on a 'round the world' voyage using only rudimentary navigation tools (the stars) - as their ancestors did. Last week, they got to New York City where they have spent about a week, open to visitors. Here is their story, updated, and a few pictures. 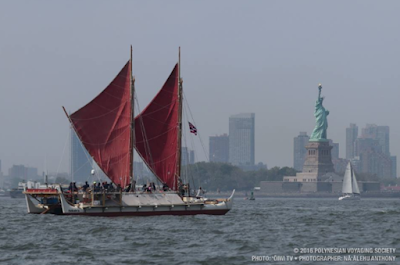 A Polynesian crew navigated their wooden voyaging canoe some 23,000 miles to lower Manhattan using only the stars this week, as part of their goal to make the world better.


The Polynesian Voyaging Society has spent the past 13 months sailing the Hokulea canoe from Hawaii to ports around the globe to inspire people to take care of “island Earth” and demonstrate how the seas connect us all.


They’ve already met with several prominent global leaders and on Wednesday, master navigator Nainoa Thompson will present their message to a World Oceans Day event for the United Nations in New York City.


The crew has used the same navigation methods as their ancestors did centuries ago to reach lower Manhattan on Sunday, where Native American tribes and New York officials were there greet them — along with thousands of other people, The Associated Press reports.


Thousands of people greeted the Hokulea crew when they arrived in New York City on Sunday.


The Hokulea has traveled across five oceans, stopping at 55 ports in 12 countries so far, according to the AP. Along the way, the crew has met with Desmond Tutu in South Africa, explored the Great Barrier Reef and had Ban Ki-Moon, the United Nations Secretary-General, sign a pledge to be a better environmental steward in Samoa. 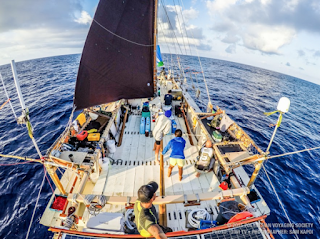 The Polynesian Voyaging Society estimates the crew has reached more than 47,000 people around the world via the Hokulea, connecting communities across the South Pacific all the way to the Atlantic. 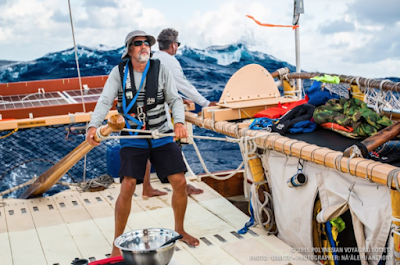 The crew will continue to sail up the New England Coast after the address. They will embark on the last leg of their journey through Panama, the Galapagos Islands and, eventually, back to the Hawaiian islands during the summer of 2017.
And if photos of their journey thus far are any indication, the Hokulea’s Mālama Honua voyage is one of the most beautiful odysseys of our time.
Indeed it is! And a daring and inspirational undertaking!
Until next time,
Fair Winds,
Old Salt
Posted by Maritime Maunder at 7:21 AM