WAVERTREE TO GET SOLO BILLING AT SOUTH STREET SEAPORT

5 June 2016: At South Street Seaport, New York City, one has long been able to see, visit aboard, and marvel at the two iron-hulled clipper ships moored there as displays. There are several other ships there including a lightship and a couple of schooners still in active use. Shops and inside displays round out the exhibits at this wonderful museum.


﻿
Pictured here is an aerial of the Seaport showing the two clippers, Wavertree and Peking, along with the Ambrose Lightship (very small and red at dock opposite the sailing vessels.

During the course of last year, it was determined that both of the ships needed some major refit work.
The museum also decided to let Peking find a new home and she will be leaving for Germany (her origins) where she will get the attention necessary to restore her earlier glory and be appreciated by tourists and locals alike. Which left Wavertree as the centerpiece of South Street and needing work.

The following article appeared this past week in the New York Times and was shared by an archeologist, Sarah Ward, from Australia (!).


ABOARD WAVERTREE IN KILL VAN KULL — In the 131 years since the iron-hulled cargo ship Wavertree was built, it has been tossed and tattered — its main mast ripped away in a hurricane, and its role demoted to sand barge.
So when the vessel sailed from the South Street Seaport to Staten Island last year for a mast-to-hull restoration, the crew feared that the extensive damage would draw out repairs and delay the ship’s return to its Manhattan berth.
They should have known better. Wavertree, which has endured no shortage of natural and economic calamity, turned out to be more resilient than anyone anticipated. In September, after more than a year away, she is set to return to the South Street Seaport Museum, mended, gleaming and ready to remind visitors of the ships that define New York City’s history. The 15-month, $13 million city-funded undertaking has progressed ahead of schedule, hastening the goal of once again sailing Wavertree through New York Harbor. 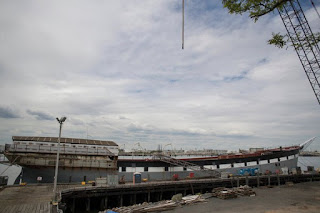 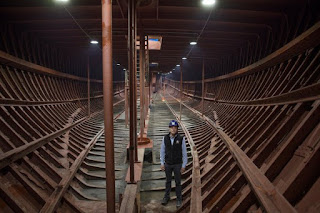 “We were pleasantly surprised,” Jonathan Boulware, the executive director of the seaport museum, said. “It’s a real testament to the era’s wrought iron.”


When it was commissioned in Southampton, England, by R. W. Leyland & Company of Liverpool, Wavertree was among the last large-scale sailing ships fashioned from wrought iron and it remains the largest afloat, according to the museum. Last May, workers brought it by tugboat to the Caddell Dry Dock and Repair Company in the Richmond Terrace section of Staten Island and expected to replace 10 large metal plates on the hull. Instead, the 4 ½-by-20-foot slabs of iron, which sit below the water line, needed only minor repairs.
Wavertree has nonetheless required an ambitious overhaul, carried out by a crew of up to three dozen. The ship spent five months in dry dock, where workers scrubbed away barnacles, seaweed and other gunk before adding layers of protective paint to its underside. The team has also been replacing three decks. The wood that once covered the main deck has been exchanged for steel to keep out water. The poop deck is being repaired traditionally, using wooden planks caulked with cotton and oakum then sealed with pitch. And Wavertree once again has its ’tween deck, a modest level between the main deck and the cargo hold that had been absent for decades.
The most daunting task, workers said, has been the renovation of the ship’s three square-rigged masts and their rigging. For that, Caddell built a pair of basketball-court-size sheds outfitted with both old-fashioned and highly modern tools. Inside one, the crew is building 16 spars from laminated timber. The other has held more than three miles of wire, which was stripped of its old protective coating and wrapped in a new layer of tar-soaked pine and leather.
Though the crew did not expect to fully rig the ship by September, time and money saved on the hull plates accelerated the schedule. “I marvel at how effectively and efficiently we’ve been able to conduct the restoration,” Mr. Boulware said.


Although its immense iron frame and masts give Wavertree a distinguished profile today, it was a relatively common model when it was built by Oswald Mordaunt & Company in 1885. A plaque identifies the 325-foot Wavertree as the company’s hull No. 231. Mr. Boulware noted that stringers, which fortify the hull, on the ship’s port side dip below those on its starboard — one of several imperfections in the construction.


The cramped quarters once held bunk beds stacked tightly to accommodate a crew of 35 men in the ship’s heyday. Over the years, Wavertree circumnavigated the globe nearly 30 times, ferrying sundry cargo — coal, kerosene, jute, cotton, tea, coffee, molasses, timber. On Jan. 14, 1895, it called on the Port of New York, bearing a load of nitrate from Chile.


In 1910, a violent storm off Cape Horn splintered Wavertree’s masts, ending its cargo-shuttling days. Its owners sold the ship to Chilean businessmen, who used it as a warehouse for 30 years. It transferred hands again in 1947, beginning a career as a sand barge in Buenos Aires. Wavertree was acquired by the museum in 1968 through the efforts of the late Peter Stanford and others who founded the museum after arranging for the ship to be towed there from South America.
The ship’s homecoming was made possible in part by the impending departure of Peking, another tall-mast sailing ship, which has graced the seaport since 1974. Peking, too, has been battered — by war, by waves and by weather. It suffered through plummeting tourism in Lower Manhattan after the Sept. 11 attacks, and the devastation of Hurricane Sandy in 2012.


Faced with mounting financial difficulties, the museum considered dispensing with the four-masted barque, which was built in Hamburg, Germany, in 1911. However, salvation came from the German government, which is spending 30 million euros (about $33 million) to bring Peking home, carried across the Atlantic Ocean on the back of a heavy-lift ship.


“I’ll be sad to see her go, but it’s what’s best for everyone,” Mr. Boulware, said. “It’s about resource allocation.”
We will await eagerly her return to the dock at South Street!
Until next time,
Fair Winds,
Old Salt