SHIP GRAVEYARD NEXT DOOR TO NYC

12 March 2016: This is quite incredible and a surprise to me. And I live near by to this! Great pictures, too. Remember the post we did about Mallows Bay a month or so back? That was in the Potomac River not far from Washington, DC; this one is in New York's back yard! Stunning! 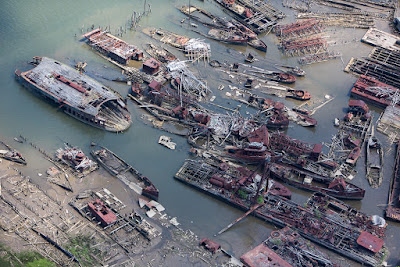 New York City may be known for its luxury skyscrapers and bustling streets, but just a few miles south of Manhattan, there is an altogether different sight to behold. Languishing in the water just off Staten Island, scores of boats are left to rust in a little-known ship graveyard – just a stone’s throw from the city’s lights.
Images captured by US photographer Gordon Donovan reveal the haunting scenes at the Arthur Kill Ship Graveyard in Rossville, Staten Island, which is only accessible by meandering through a cemetery and knocking on private homes to ask for permission to pass. The photographs show great hunks of metal languishing in the water on the south side of Staten Island, which is fewer than 20 miles from Manhattan and 18 miles from Brooklyn. 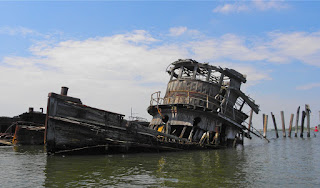 The Arthur Kill ship graveyard was never meant to become such a decrepit spectacle. In the years following World War II, the adjacent scrapyard began to purchase scores of outdated vessels, with the intention of harvesting them for anything of value. But the shipbreakers couldn’t keep pace with the influx of boats, especially once people started to use the graveyard as a dumping ground for their old dinghies. 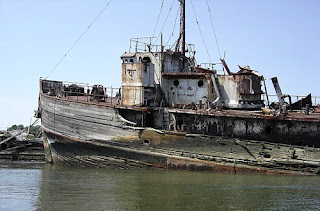 Plenty of ships fell into such disrepair that they were no longer worth the effort to strip, especially since many teem with toxic substances. And so they’ve been left to rot in the murky tidal strait that divides Staten Island from New Jersey, where they’ve turned scarlet with rust and now host entire ecosystems of hardy aquatic creatures.


Next time we'll show you some more pictures and tell you a bit more about this amazing - and yet disgraceful - graveyard of ships.

Until then,
Fair Winds,
Old Salt

Posted by Maritime Maunder at 11:58 AM