23 March 2016: Yesterday was the anniversary of a melancholy day in American History - the death in a duel in 1820 of Stephen Decatur, hero of the Barbary Wars and the War of 1812. Some years ago, I received a pamphlet (common in the early days to sway political opinion) published shortly after his death by relatives of James Barron which contained the correspondence between the two men, and was likely published to ease the animosity most felt toward Barron for killing a true hero.
﻿
On 22 March 1820, Commodore James Barron and Commodore Stephan Decatur met on the Bladensburg MD dueling grounds to settle a personal grievance that had festered, at least in the mind of Barron, for twelve years. While both men were wounded in the pistol exchange, Decatur’s wound proved fatal and he died the next day. Barron recovered.


What led up to this fateful meeting that took the life of one of America’s foremost heroes of the Barbary Wars and the War of 1812? An exchange of letters, precipitated by James Barron, gives us some answers. Possibly out of a sense of justification, Barron had the letters published in a pamphlet within months of the duel and so they remain for posterity, filled with venom and innuendo, personal slights and accusations, that might help explain the mindsets of these two men.


What started the whole imbroglio? James Barron was aboard the U.S. Frigate Chesapeake in June of 1807 when, having left Hampton VA for the Mediterranean where Barron was to assume control of the squadron there, the ship was attacked by HMS Leopard seeking Royal Navy deserters. After a dreadfully lopsided engagement, Barron ordered his ship surrendered to the British; Captain Humphries, commander of the Royal Navy ship, refused to take Chesapeake as a prize (it would have been adjudged illegal in any case as the United States and England were not at war). The British took four deserters from the American ship (three later were returned as Americans) and went on their way. Chesapeake limped back into Hampton with three dead and over twenty wounded, including Commodore Barron.


Following the court of inquiry, a court martial found Barron guilty of only one of the four charges brought against him and sentenced him to a five year suspension from the Navy, a rather harsh punishment in the minds of many. Stephen Decatur sat on the court martial board along with John Rodgers, James Lawrence, William Bainbridge, David Porter, and others. Decatur had requested that the Secretary of the Navy excuse him from this duty as he felt he was prejudiced against Barron; his request was refused based on the few captains available to serve. He also made clear his predisposition on the case to Barron’s civilian attorney, without avail.


When the War of 1812 began, just over four years later, many felt that Barron should return from Europe, where he had taken up residence for the term of his suspension, and help the cause. He did not. Following the war, he requested reinstatement to rank and position in the Navy. Decatur was, perhaps, the most vocal in his arguments against the reinstatement and thus began a feud, which would end on 22 March 1820. 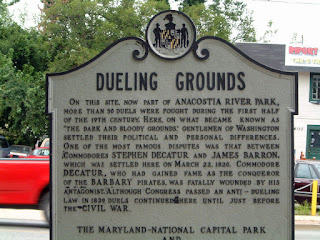 Decatur's funeral was an extravagant affair, effectively closing down Washington City for the day. Naturally, all the politicians turned out, but also so did all the Supreme Court Justices. The funeral procession was over a mile long and was joined by mourning civilians who truly missed the great man. As I mentioned, a melancholy day!