31 January 2015: Some years ago, maybe 15? - H.L Hunley a working submarine created by H.L Hunley for the Confederates was raised from the depths of Charleston SC harbor where it had lain for some 130 years (2000). Clive Cussler's exploration group NUMA found the wreck a few years before that (1995) but a lot of wrangling over who owned it and who would pay to raise this relic of the Civil War delayed its trip to daylight for years.

In April of 2005, I had the privilege of seeing the Hunley as she lay in the conservator's tank in North Charleston. I was indeed fortunate that the day I visited with Maria Jacobsen, Senior Conservator in Charge of the project,
the water had been drained from the tank for testing and replenishment. This allowed me to see the entire vessel without the distraction of the water. It was quite extraordinary.

Probably the one thing that struck me most forcefully was how advanced the sub was, considering it had been built in 1863; many of the features in it are still incorporated in modern subs, albeit with some variations. In Hunley's case, the sub carried a crew of eight, six of whom propelled the ship through the water using a long crank, not unlike a modern crankshaft. 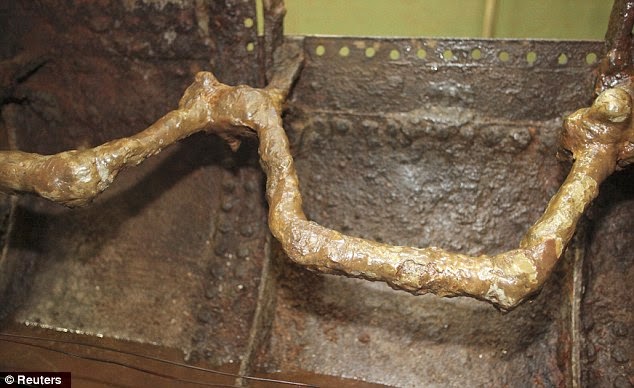 The men sat on opposing benches and turned the crank which drove a single screw in the stern. The idea was to attach an explosive "mine" to the side of an enemy ship, back off, and "let 'er blow!" A 16' spar with a sharp point on the bow of the sub would accomplish the objective - and did! On a February night in 1864, Hunley went out into the harbor at Charleston, submerged, and stuck her explosive charge into the wooden hull of the USS Housatonic in concert with the Confederate effort to break the Union blockade of Charleston. It worked and the Housatonic did in fact sink. So did the Hunley, though at this point, scientists are uncertain as to why. Most believe the chop in the harbor flooded the boat when they surfaced some distance away with the hatch open. 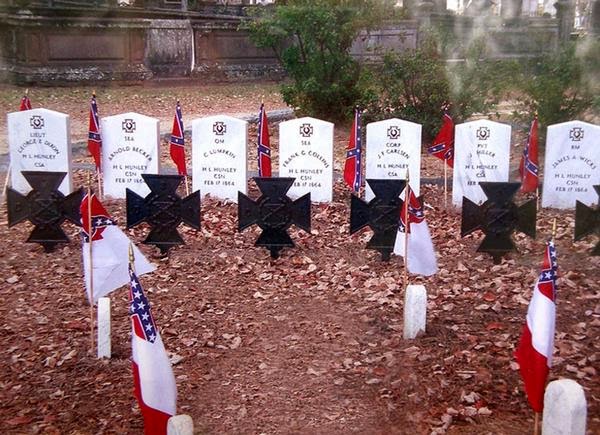 Early exploration of the recovered wreck found skeletons of her crew, which were studied, life masks made, and, believe it or not, identified as to which was who. (The record of the voyage told us who was aboard). Each were casketed and buried in the Confederate Cemetery in North Charles with attendant ceremony.
While the vessel was in the tank to leach out the salt water, scientists were limited in what they might do. 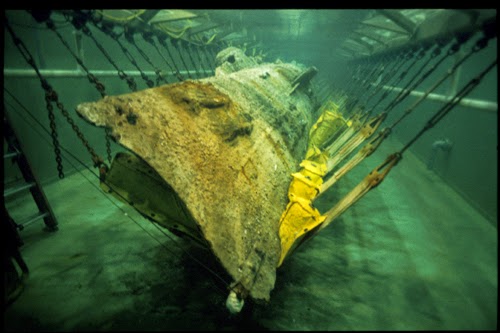 But now with the ship dry, they are able to open spaces unavailable previously and will likely be able to determine how the ship sunk. First, the concretion surrounding the hull and everything within it had to be removed, a tedious job for sure, done with small pneumatic chisels and dental tools. Now more in depth investigation ﻿can proceed. The ship is managed by "Friends of the Hunley" who are dedicated to conserving and eventually exhibiting the ship.

Fair Winds,
Old Salt﻿﻿
Posted by Maritime Maunder at 8:41 AM